FEMALE SADISM CAN BE SO HOT 2 ? SLAPPED BEFORE ABANDONED IN THE FOREST: Clip in English! In FEMALE SADISM CAN BE SO HOT 1 we all could see what a complete useless moron Joschi is. What shall a WOMAN do with a total idiot like Joschi who can't even k*ll a mosquito? Absolutely right! A useless wimp like Joschi has to be abandoned in the forest. Before his cruel Mistress Goddess Gloria is leaving him she can't resist to humiliate the sh*t out of him. Joschi is chained with a dog leash on the branch of an ancient, felled tree. With bound hands he hast o kneel in the mud before his sublime Mistress ready for a good slapping. To humiliate him even further Joschi hast o wear his sign of shame around his neck. ?40 YEARS OLD VIRGIN LOSER? is written on the sign. While slapping him Goddess Gloria taunts him about the sign. She laughs at him and tells him that no waman wants to be near him expect for spanking him. Slap after slap hits Joschi's red swollen face. To humiliate him even further Goddess Gloria takes a bunch of leaves and stuffes it in Joschi's snout and continues with her slapping orgy. After the slave has got a rain of slaps the Mistress wants to spare her arsitocratic hands and tears out a tendril for spanking Joschi. Before Joschi is finally left completely alone in the forest he still gets some very good slaps by his sadistic Mistress. 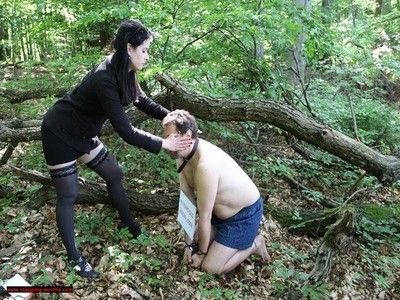