Look how I hit the balls, the cock of my submissive, it makes him bandage well, his little cock wets like a slut and me it excites me to the highest point ... I then spit on his acorn, I jerk him, I compress his balls, all this by talking to you and I'm sure you'd like to be in his place... with this treatment he squirts into my hands and I make him lick his juice from balls.

Welcome to episode Four of Trampling from HellYou are all in for a wild adventure in this one. This clip starts with Mistress Alexis trampling me in flat kicks, then she intensifies the action by trampling me with boots. She walks all over my stomach and chest repetitively without giving me any breaks. Sadistically enjoying the pain she's inflicting upon me, you hear me grunting and making noises showing how painful its getting. If you think I had enough it gets even worse, or better. She changes into her SHARP HEEL BOOTS and sadistically continues trampling and walking all over my stomach. Her heels are literally digging straight down into my skin with her full weight upon me. The pain I was feeling is undescribale as I felt like her heels would penetrate through my skin. After the boots trampling, She decided to end the extreme suffering by trampling me in her sneakers. Majority of this time though was spent crushing my head under her shoes, as she was walking all over my face. This entire trampling clip is a MUST WATCH! You'll see how cruel and sadistic Mistress Alexis really is. You won't regret it. Enjoy ;) New videos every week!

my friend loves to lick my pussy. I'm just in awe of it. he licks my pussy when I sleep, watch TV and when I come home from work. I love to write to my friend. we are a great couple. 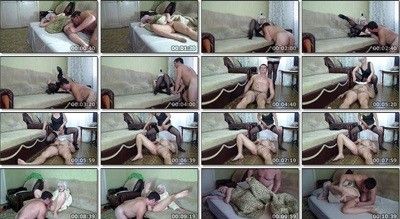 Kiss my feet slave, better kiss, I want to feel your eagerness. Now turn around and expose your leaky ass, I'll fuck you with my foot. Yes, how warm it is, how pleasant. Spread your ass wider with your hands, I want to go as deep as possible. At this rate, entire foot will soon be entering in your ass. Here's a good fellow, how well you ride on my leg, for this you will be rewarded, I will allow you lick my ass and of course I will shit in your toilet mouth. How nice it is have slave husband and use him as I want and when I want

Are you hungry slave? I know you are. Just follow me! That's right you are a pig and now I will make your breakfast. Stay down and watch me how I make your nutritious breakfast. You can smell how tasty is it. Open your fucking mouth and swallow all shit that will fall into your throat! This would be our breakfast and your dinner for every day eating! You should be getting used to it!

Welcome to episode 9 of Facesitting ParadiseIn this clip Mistress Alexis sits full weight on my face while wearing her sexy neon shorts along with her high socks. She's crossing her legs over and over adding more weight over my face. I start struggling and of course no remorse or mercy is shown. She's bouncing and pounding her amazing ass all over my face. After 10 minutes, she takes her shorts off and continues smothering me in her thong. Watch as Mistress Alexis smothers me full weight while wearing her sexy shorts, and then thong. Enjoy ;)new videos every week!

In this clip, mistress Alexis jumps and walks all over my stomach, chest and face while wearing her heel boots. I suffer lots of pain, but she does not show any remorse, or mercy. watch as she jumps sadistically and STOMPS all over my body. Enjoy New videos every week!

Here you are at the end of My dirty boots, begging to serve..begging to stroke..stroking and edging endlessly to MyÂ  dirty leather boots...show your devotion my boot slave!

YouÂre a fucking pervert, hiring me and not even wanting sex with me Â you want something so much tasty than pussy could ever give you. I tease you for your desire for not even wanting my ass, just what it give you. Stay down and open your mouth, and eat my giant firm SHITÂ A proper toilet can take whatever I give it. But it looks like I donÂt even have to demand, youÂre gobbling up all my poop as soon as it leaves my ass afterall! I know all about your desires you fucking bitch! Lick my ass clen after the toilet.

ItÂs your first time?? Then youÂre in for a real treat babe. A HUGE log of thick stinky shit from the source, a refreshing bowl of golden nectar to wash it down with, and dirty asshole, which you lick clean after toilet. Yum!

In this video, Yana decided to arrange a dirty solo show for you . Well, let's talk about everything in order, first Yana undresses takes off her clothes , and then Yana climbs on the kitchen table and begins to caress herself . First, Yana caresses herself without taking off her underwear , Yana gently runs her hands over her chest , and then collects her panties on her pussy and begins to rub her panties on her pussy . After playing a little with her pussy, Yana bares her breasts and caresses the nipples on her chest with her fingers , after a short caress of the nipples, Yana takes off her panties and lies down on the kitchen table and begins to caress the pussy with her fingers . After playing with her tits and pussy, Yana again takes her panties in her hands and shoves them into her pussy , shoving her panties completely into her pussy, Yana rises up and first shits , and then pisses on the kitchen table . Lying down on the kitchen table, Yana takes her shit in her hands and first smears the shit on her pussy, and then on her tits . Yana Chan deliberately covers her naked body with her own shit . Well, now Yana's whole body is in the shit and Yana can continue to have a little fun . Yana again lowers her hand between her legs and begins to caress her pussy with her fingers Yana brings herself to orgasm, having experienced an orgasm Yana takes out her wet panties from her pussy and shows them to you, Yana's panties are very wet because Yana was very excited and just before your eyes Yana experienced an orgasm . Here is a dirty solo video recorded for you by Yana .

My worst employee came to bother me at the office because he can't bill my company and doesn't know how to do. I know what his role might be here: licking my soles and smelling my sweaty feet! Since he is of no use as an employee, perhaps he will be worth something as a slave.

A Classic Dine and Dump video with a twist: this poop was enormous! Watch me eat breakfast, lunch and dinner and sweat in the summer heat while holding and holding a very big, gassy shit. While holding onto and growing this big poop inside me, I release super stinky pre-poop farts so you can get a smelly taste of what's to come and to relieve some of the immense pressure building inside of me. I take a cool shower and the smell is even worse coming from my juicy, wet asshole. Sometimes joining a sexy girl in the shower comes at a price! Something big is coming, and you can smell it.Finally I can't stand it any longer. I'm getting goosebumps from the anticipation of this big monster stretching out my asshole and sliding out of me. I get you to lie underneath me and lower my asshole over your face and mouth.The seemingly never ending cascade of long, firm longs begins and you can do nothing but watch and do your best to keep up. You keep being partially covered in my shit but despite small breaks, there always seems to be more. After the firmest parts are done, there's more that is broken up by extremely stinky air pockets making it crackle and sputter while it comes out like a dense, soft serve ice cream. You can hear the gas and the thuds. At the end, I show you just how much it was from another angle. It's seemingly impossible but you witnessed it from start to finish. I deserve a pat on the back for this one!

These two raven-haired vixens will put their slave through a double portion of hardships tonight Â they both want to get their hungry slits licked and they all want it done perfectly, which means that he will have to work really hard but still wonÂt receive any reward for all the efforts he spends on it. Munching their holes and toes and only getting punches and kicks in return Â thatÂs his fate!

Do you want to know what I'll do with you after Corona? When we can meet normally again without a (protective) mask? I will tie you to the bed, fix your hands and feet so that you can no longer move. Then I slip my favorite gas mask over your face, attach my breathing cock to it and take your breath away. How exactly? I can think of various options.

I almost pass out when the hard poo was coming ,it pains and hurt so much before I could poo it,then came the soft huge ones with ****** after pushing the hard one out