I know my sexy ass turns you on. Itâs a dream coming true for you every time you see it. And you love it even more when my ass gets very close to you - so close you could almost touch it - thatâs just how you love it. But ass my ass worshipper youâll get some tasks. And every time you look at my tasty ass youâll have to pay a tribute!

I know my sexy ass turns you on. Itâs a dream coming true for you every time you see it. And you love it even more when my ass gets very close to you - so close you could almost touch it - thatâs just how you love it. But ass my ass worshipper youâll get some tasks. And every time you look at my tasty ass youâll have to pay a tribute!

In this breathtaking video (breath-taking in the true sense of the word) Karate Kiki leaves her kimono and for this occasion she wears - this is very unusual for her - a sexy black outfit enhanced by a pair of black stockings. Wearing these sensual clothes, she takes a book, sits full weight on her human furniture and totally uninterested in his suffering she starts reading. Not entirely satisfied, she tries making his breath even more difficult by plugging his nose with her soles and toes. Kiki begins to rub her feet fermented in nylon pantyhose just removed from old shoes (they have the same malodorous quality of ripe cheese!) on each part of the pathetic slave's face, literally brainfucking him with the stench of her dirty stockings. After three minutes of complete relax, the Foot Domination session turns into a Beatdown one's: now it's time for some kicks in the body and some trampling action. If you like young karateka girls in black stockings... this clip will send you in ecstasy! 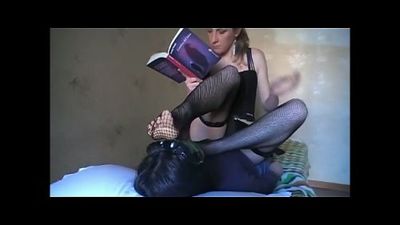 This loser is just so boring! I trample his hands for a short time under my hiking boots - but then want to humiliate him. I take a big bite out of the sweet pastry, chew it and spit it on the ground. I rub my dirty boot soles all over the crushed and spit-soaked food and then make the loser lick it from my boot soles. But he's even too stupid to get the food out of the deep tread ... I stomp on the ground to get it off my boot soles and then make him eat it from the ground while I trample his hands once again. Then I crush another big bite under my boot soles and spit on it a few more times. This time he better tries harder to get his tongue into the boot tread! I speak some German in this clip - but it's easy to understand and the action speaks for itself as usual ;-)

Your money is mine. When will you finally realize your fate and give me the bucks that belong to ME?! Watch my hot butt inside those sexy black nylons! It's not only hot as hell, but expensive also, boy! So I reach for your dirty bank notes... it's time to pay for what you saw, Peeping Tom!

While on her way home from school, this sweetheart is suddenly grabbed from the street by a man who then brings her to his home! As soon as they are inside his residence, he takes off his lower garments and then repeatedly thrusts his dick down her throat! Because of this, she repeatedly gags, but despite her pitiful condition, he doesnât stop, eventually causing her to vomit! She doesnât just do it once but a couple of times since the guy doesnât stop until he reaches orgasm! By the time he is about to release his load, he lays her down on the floor and then cums on top of her mouth! Despite this, he is still not yet done with her! He proceeds to take off her panties and then finger fuck her pussy! Shortly after, he ends up making her squirt as well as accidentally urinate! He then thrusts his penis inside her vagina and fucks her in different positions until he orgasms for the second time around!

I order the slave to lie down on the couch and then start biting his chest and stomach immediately. I dig my sharp teeth deep into his flesh - and each bite makes him scream in pain - and leaves behind a nice red mark! I cover his mouth with my hand to shut him up and continue to bite him hard - again and again! In the end his whole chest is covered in nice deep bite marks!

I order the slave to lie down on the couch and then start biting his chest and stomach immediately. I dig my sharp teeth deep into his flesh - and each bite makes him scream in pain - and leaves behind a nice red mark! I cover his mouth with my hand to shut him up and continue to bite him hard - again and again! In the end his whole chest is covered in nice deep bite marks!

A must watch for every dirty foot worshipper. A sadistic forced dirty foot worship from beautiful Lady Karame. With her very dirty and muddy feet she orders her slave to clean them. Her feet are gorgeous even with all the dirt on them. Her slave starts his job with the dirty soles licking slowly from the heel to the toes. Her feet are so dirty that it takes several long strokes of licking to remove some of the mud. In the process the slave's mouth gets so full of dirt that he gags several times. This entertains Lady Karame immensely as she laughs and giggles. Then the slave is ordered to lick in between each and every toe. This turns out a big challenge for him as he gets exhausted with all the mud and dirt removal. But Lady Karame is not satisfied with his performance and she is not in the mood to be merciful. So she starts shoving her toes in his mouth one after another and forces him to do a better job. All of his struggle to resistlady just makes Lady Karame more dominant and happier.

I love to see my worm drinking my pee... And he must swallow all! For helping him I put a funnel in his mouth. He also must eat some fruit directly from my ass!!!

This is a custom video request and we really enjoyed it.Be excited to see my black sandals with high heels. I am sinking in the heels in the stomach and change to position to make more marks.With the other leg i am showing you the heel, because the other one is lost in the stomach.

Watch me as I teach a beginner to eat my shit. First of all, this slave pig has to lick my asshole and my pussy extensively. He can only breathe my fragrance.Then I shit a small load directly into his mouth. It should be a beginner's portion. But he is completely eating it. Next time, there will be a larger portion. The treatment with my whip maybe was not necessary.

So many of you little twats ask me for real life sessions, to serve me completely.Most of it cannot be taken seriously, of course. But some of you are willing to go the extra mile, to prove themselves worthy to me and get the chance to spend a little vacation with me.Like one of my slaves actually tries to achieve. Watch and learn! ;) 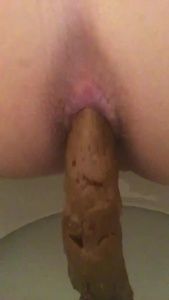 Whats does a loser like this slave deserve? Exactly, nothing but kicks in his ugly slave face. Of course we also use him to get our shoes cleaned. Do you wanne be our next victim? Then apply and of course PAY!

I pull a hot white string out of my sexy jeansbutt. You can not believe that I show you exactly what you want to see! I know from your fetish for sexy strings. And you prefer a very tight jeans on my ass. Go ahead! Look at it! 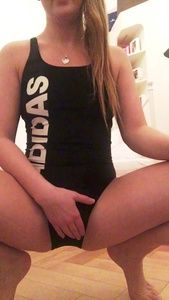 Today a little real-talk from your Goddess.I explain to you in detail how much of a "free will" I grant my slaves and which consequences arise out of these circumstances.I am your Goddess, my will matters, you do not have to have wishes, expectations or any joy in life. Except making me happy!