Mistress Zoras shoes cannot stay like this! There is so much dirt still stuck to them after her last work. It's disgusting to see so the slave will have to do something about it. Mistress Zora makes the slave lick all the dirt from them. The shoes should look like new again once he has finished. They must shine beautifully and be completely clean. The slave kneels on the ground and gets to work, but will it be enough enough? Watch now!

We like to play with my slave girl and have fun. We piss and shit in the middle of the room, compete who more and far away pissed, piss on my toilet slave so that he is wet from head to toe in our urinal. And my slave girl not only piss, but also shit. Every time she pisses, but at least a little bit but take a shitting. ItÂs so fun, so exciting

Today you can be part of a cashmeet with my slave! He will greet me right away with his cash - Â450 this time. As a reward he will get my boots in his mouth. The loser gets to lick them clean. Of course the soles must licked too. What an awesome feeling it is to receive Â450 and have my boots licked clean too! My slave is a really submissive loser and I love that! Finally, I spit in his face, and then he can leave!

I take a baby potty. I'm completely naked. my legs are wide open. I'm starting to shit right in the pot. really stinks. I am pleased with the result. the pot is full of crap. 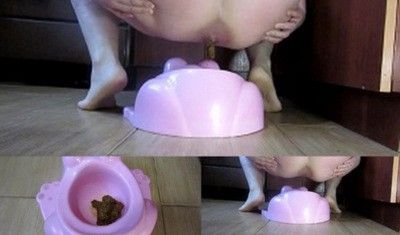 Jimmy is filming Violet's booty in jeans on a stool while her and Sarah order dinner! They complain how expensive the sushi is, and how they both need a job, so Jimmy takes a chance! On film he asks if they would sit on his face for $100 each, they both laugh and talk for a minute before saying yes but for $150!This twenty minute video includes the beginning conversation, as well as both girls asses unaware filmed on a stool! Then you get to see Both girls take turns SMOTHERING JIMMY UNDER THEIR DENIM BUTTS! They are totally unaware to the filming as they eat!This video is twenty minutes long and only the first part! Part 2 will be out tonight!

(Custom Request For Chad)Mistress Alisha Bartlett has a special little guest! A TINY FAN! She apologizes to him for how things have been the past few weeks in her ass, a bit gassy! But she promises now to start eating better! Especially not that quarantine is almost over!Alisha shoves him inside of her ass and then plops down at the computer to order some food! She constantly checks in with her slave seeing what kinda food he feels like too, even thought he won't be eating it, just smelling it!Alisha eats and then goes for a walk, all with her captor trapped between her cheeks! At the end of the video she takes him out and gives him a reward for doing SUCH A GOOD JOB! Shoving him in her sweaty stockings! HAHA

(PREMIERE VIDEO)Mistress Alexis Is Filth Fetish Studios newest model! She's a small petite blonde with SIZE 5 FEET and she LOOOOOVES to humiliate and dominate men! In this premiere video, Mistress Alexis models her feet for you STRAIGHT FROM HER CONVERSE AND WITHOUT SOCKS! She just started work again and didn't know we were filming today so she was actually embarrassed about the odor! She pulls off her shoes and wiggles her toes in your face, asking how you like the smell! She even demands a foot massage! but with your tongue!You are guaranteed to love Mistress Alexis! And there will be MUCH MORE TO COME!

Do you have any fantasies about role-playing game? Have you ever been humiliated by a woman in public? Are you curious to watch a quarrel between boyfriends... a real dispute in which HE is severely punished? If you are looking for such a video, here youÂll find bread for your teeth! ItÂs 10:16 in the morning and Miss Misia is at the park: she is waiting for her boyfriend (now ex-fiancÃ©e?) to have breakfast togetherÂ but, as usual, that idiot is late! Miss Misia sees him arriving without breath and with a lot of fucking apologies about his delay. So, she decides to punish him in a public parkÂ by pulling his ears very loud, regardless of the fact that on Sunday morning the park is populated with passers-by, who could watch all the fight! Everyone must see what a nice tug of ears the unlucky guy has to take for his silly delay!

Meet Firefly and Aria.One of the best videos ever made by us.Enough of words. Switch on your imagination or better see yourself.Enjoy.One Love.AstraCelestial team.

It's impossible to resist My sexy creamy soles.My magnificient wrinkles and soft feet make you crazy and horny.How much do you want to cover them with your huge and warm sperma?

Today, I have your dog bowls ready for you to have your break. Since you have been a good puppy, I'm going to give you a huge lunch, a selection of the biggest shit I have done along with my pee. I'm not sure which one that you would like to begin with, that's entirely up to you. However, I want you to enjoy the treats I have provided for you. Also, you must make sure you finish everything or I'll be extremely upset and will have to punish you severely. Buon appetito!!

Pearl tells Alex to lick her ankle boots. First slave licks the top of her boots. Then Pearl orders him to lick the dusty soles of her boots and suck a really long heels. She pushes them as much as she can inside the Alex's mouth until his throat or tries to puncture his cheeks. In this clip you can find a nice close-ups of Pearl's ankle boots as well as it's soles and heels.

Its so easy for me. So easy with such pretty Princess feet. Making weak men crawl and beg like its normal. Well it is in my world. Where men belong on the floor and devote themselves to my feet. Worshipping every perfect inch of them and praying to them. And as the good little footbitch you are you will make sure that every wish of mine is fullfilled in seconds.

Week 24: Ugg Boot Slippers As always, each of the products will only be available once in my store - so don't be late and get hold of your very own personal item of Mistress Isabellas #StinkySale.

You can now be there as I use my foot servant to lick my ballet shoes clean! They're really dirty and I want them clean again. You want a lick too? Yeah you wanna lick!

ITALIAN SPEAKINGMy little bitch, almost choked, is also prevented to see from where the lashes, inflicted with my ruthless bullwhip, came. Every now and then I like to torture her nipples, or strangle her throat using my whip like a noose, but I do it only for her own good! Eh Eh Eh...

Mistress Alexis is enjoying a NICE BIG PIZZA, Extra cheese and spicy pepperoni! And to top it all off with a big Tallboy of******! The camera pans down to show Jimmy, Pinned beneath her butt!The First portion of the video is with her wearing Jean shorts! Bouncing and shaking her booty on his face while he sniffs her ass! The second half of the video, Mistress Alexis sits in her thong! And what do you know? the pizza has made her a bit farty!She demands Jimmy sniff harder! Inhale the scent! AND LEARN TO ENJOY HER FARTS!