This clip contains action with two mistresses and 2 slaves !In the first scene, Goddess Parvati shows off her beautiful ass while she uses 2 slaves to piss in their mouth. Because the slave cannot drink all, they are ordered to sip all the pee from the floor.In the second scene, the two mistresses want to have some fun while smoking and drinking beer, so they decided to humiliate the slaves more. They took their huge strap ons and they are using them on to mouth fuck the slut boys and as their human ashtray. In the third scene, one of the slaves lays on a table, on his back. Mistress Parvati is dilatating his ass with her fingers in the black latex gloves. She does it gently, but kinky. Mistress wants to use her huge strap on, for a deep penetration. While the slaves gets his ass ready, the other mistress, Andreea, fucks his mouth with a big dildo. SheÂs wicked and kinky. Mistress Parvati dilatated the slaveÂs ass enough and he is penetrated with the huge toy. Then, they switch roles. After that, slave is taken from the table and fucked hard by Goddess Andreea in the ass. Then by Goddess Parvati and Mistress Andreea orders the other slave to face fuck and deepthroat the slave fucked in the ass by her friend. She watches delighted, with a satisfaction in her eyes. 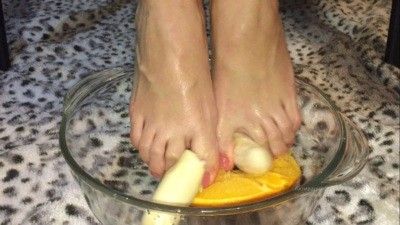 Still toying with and tormenting our slaves, my friends Ava Black and Lady Bellatrix and I decide to pit them against each other in a humiliating wanking race... The race continues - who will win?! Or more importantly, who is the biggest loser?! We tease with our beautiful backsides, we jeer, we laugh, we humiliate these two slaves until one of them blows his beans first - what will be his reward?!

Lady Jane has a sexy ass. In nylon tights it's even hornier and you cannot resist the sight of it! The blonde lady knows that and shows you it up close. Would you like to touch her ass or even kiss it? Do you deserve this?

If you want to be the ultimate Boner Champ, then you're going to have to cum-plete all five challenges. Your cock must prove it can endure several stimulating situations and climax at the end of each. I know an expert masturbator like yourself can become Boner Champ if you really put your mind to it!This time I want you to be very gentle with your cock. Keep a nice, loose grip with no squeezing, and no pulling. Caress it with your fingers, stroke gently up and down the shaft. You can pick whatever pace you want, even change it up and alternate, but what you will not do is get rough with your cock. I know you can do it and become the ultimate Boner Champ!

Goddess Panther had stomach aches at night, she went in the toilet and pooped first fat big long turd and after a lot messy turds while she masturbated her wet pussy.

ENGLISH SPEAKINGCUSTOM REQUEST- After the humiliation of my father and the video being sent to my mother. She is very angry and comes to visit you, and threatens you because of what you did to her husband my father Ossy. However, you are much stronger than her. To make her show you respect, you grab her and put her over your knee as you are going to give her a good spanking. You pull down her pants and spank on her bare ass till she begs you to stop. If possible you can also use a cane. Also, you show her how dominating you can be. Finally, you make her lick and suck your feet while reminding her how BOTH my parents are now your slaves. Just like me Gino...

Mistress Lilly continue her shitting stories. The silicone lady love to shit and piss EVERYWHERE and she also have a camera with her for recording that ! A true Scat Goddess who love to show off her passion for scat !! This time she shitting in the woods and at home in her panty 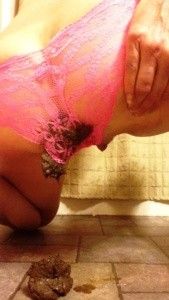 Three young women clean their shoes on a doormat made out of jelly babies. Then they enjoy stepping on the babies with naked feet and clean the sweat of her feet . .

A lovely blonde girl in riding boots (jackboots) finds a doll on the ground. She steps on it and it feels good. Then she kicks it with the heels of her boots and enjoys the situation.

Mikaila has been working all day long, and she spend all night playing video game, so she thought it would be nice if you could give her a bit of attention on her tired feet! She takes her shoes off, and let you sniff the inside of her shoes, before she just makes fun and you, and rubs her sweaty socks all over your face! She makes you sniff the bottom of her socks, and makes you lick the sweaty bottom of her socks too! Mikaila also peels her socks off to rub her sweaty naked feet all over your face! She knows how bad you are addicted to her feet, so she just makes fun at you, and makes you sniff them! She also wants you to stick your tongue out, and lick the sweaty bottom of her soles, like a good devoted loser slave! Make sure you also lick and clean all that dirt, right in between each of her toes!

Are you staring at my feet again? You see my nylons in high heels and your brain stops working, right? I bet you'd love to bury your nose in them ... feel them ... smell them ... worship them. Your addiction to nylon feet is just too obvious - and too easy to take advantage of. But you'll start by kissing and licking my office high heels ... and then I'll take them off ... let you sniff my shoe first to get you hooked ... then you may smell my nylons ... my moist warm nylons after a long office day ... that's a dream coming true, right?! Who knows, maybe you'll even be allowed to cum in the end?! This is a non-exclusive custom clip for a fan. If you want me to do a custom clip for you contact me at marissa@madamemarissa.com!

I've put the slave in the facetrampling box again - but this time he's not getting off easy! I'm wearing my brutal hiking boots with a hard deep and sharp tread! I walk over the loser's face a couple of times, press my boot soles on his skin and enjoy how he squeals in pain. Then I order him to stick his tongue out, so I can wipe the dirt off my boot soles on his tongue. Then I trample his face some more - hopefully there will be some nice tread marks on his foreheads - so everyone can see he's my carpet! In the end I also included a short POV scene - to show you, how it would look like if you were in his position! This is a non-exclusive custom clip for a fan. If you want me to do a custom clip for you contact me at marissa@madamemarissa.com!

"Gotta find that comfortable spot where your nose pokes up!" Alika says positioning herself until his nose pokes up her bung-hole! Once she finds the "spot", the face riding begins!While riding his face she asks him if he likes being her bitch! She then gets up and makes him kiss the dirty sole of her boot, before sitting back on his face! At this point Alika's breathing grows heavy as she continues to ride the ugly face beneath her!

The sun is shining and i want to trample Pete after we went shopping in a summer dress and ballerina pumps.But barefoot is fun too...