I was asked at recommendations of my mistress to be a slave for other two harsh mistresses to shoot a few scenes where I get beat, fucked in the ass with HUGE strapons and to use me as human toilet. Hard for me to can handle in this way, but i hope my 2 new Godesses will call me again and again for using my mouth specially:) My new 2 Godesses are the best gorgeous Dominas, best good looking Mistresses from site. Proove me i'm wrong ! MY Godesses told me to put their video here and they wanna see if it worth it to work with me and become more kinky, perverse and bizarre domme ! 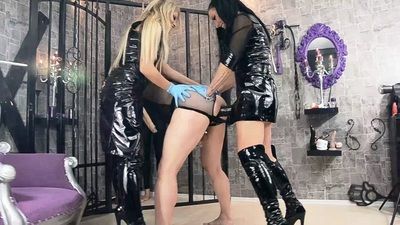 A new team with two hot girls Alice and Teodora interrogate one looser boy. Great and excellent tramplers mistreat him with their feet, butts and legs. And gave us their best show together. They will solve eleven pieces of the puzzle. A guy worship their feet in black fishnet pantyhose.

A dozens of nasty Mistresses and a slave who is strapped up on the ground, wrapped up in foil so he cannot move his arms and a bowl over his head where the Mistress has placed him to receive their discharge! They then took it one by one to piss on vunerable slave until the bowl is almost full and the slave's head is drowning in the Mistresses piss! What a joy to watch!

A femme fatale( BLACK WIDOW) is a mysterious and seductive woman(so true) whose charms ensnare her lovers in bonds of irresistible desire, often leading them into compromising, dangerous, and deadly situations.A femme fatale tries to achieve her hidden purpose by using feminine wiles such as beauty, charm, and sexual allure. In some situations, she uses lying or coercion rather than charm. She may also make use of some subduing such as latex gloves, sexy legs, sensual lips . Brainfucking eyes..Her ability to entrance and control her victim with a spell was in the earliest stories seen as being literally supernatural; hence, the femme fatale today is still often described as having a power akin to an enchantress, seductress, vampire, witch, or demon, having some power over men.Whats Goddess Celine ' s secret to enslave Her victim?? Lets see

I need to feed my hungry toilet servant. I?ve been holding my Goddess shit for him to eat, and now I am ready to unload. I push out a nice creamy big shit. It felt so good coming out of my ass. (After this poop I played and fucked my shit with didlo in another scat video ?Fuck MY Shit? and then I smeared and got my feet dirty in video ?Shitty Feet?) After all the playing it left me with a nice smear shit coated cardboard. I thought of my hungry toilet servant, and thought he would enjoy some of my leftover Halloween candies rolled and coated in my Goddess shit. I sit completely naked with my legs spread as I prepare my special scat covered Goddess candies. I love when my Goddess shit is consumed by coating my shit on special little candies. I especially love it when my scat candy is eaten around others in public! Savor MY Goddess shit!

Hold your eyes open for 25 seconds, now 20 seconds, now 15 seconds. Eyes wide, now blink. Do you see me when you close your eyes? Of course you do, thats what happens when you hold your eyes open for 20 seconds like I told you. You are so focused on my ass, then my tits and finally my face. Nothing could break your concentration on my every word instructing you to jerk off. Do you think you can handle 20 minutes of jerk off instruction and physical imprinting? Of course you can't, but you can keep watching this clip over and over until you actually make it to the end. How many loads will it be before you make it? One mind blowing one or tons of pitiful, jerkoholic ones? Either way you will find yourself staying up all night jerking off to me. Probably the next couple of nights, weeks, months you'll have your dick in your hand jerking over and over for me. Starving yourself of sleep and food just to pump for me. Actually that sounds like the perfect life for a Lindsey jerk off, so hop to it.

3 clips of Girls' dirty feet being licked: Stephani & Her friend Sashi from "Girl Power" video series getting Their dirty feet licked + Miss April at the playground + Goddess Alyssa w/some really dusty, dirty feet making Her slave lick 'em, pretty humiliating stuff. The Girls love that They can get this slave to do this.

Taking a bottle of dark blue shiny nail polish, she shakes it up and then removes the brush, brushing up and down one toe then the next, painting all ten toes with dark blue nail polish

This double-clip features Miss Kiara having Her heels removed and bare feet worshiped by Her slave + Miss KaylaaRae putting a real phonecall in to Her boyfriend while Her slaves sniffs and kisses Her boots. She also uses him as a human footrest.

My slave really thought I wouldn't notice that he took a smoothie out of my fridge without asking for permission! Well, I'll show him how I'm dealing with thieves! I ordered him to put his hands on a metal gutter and lined up some of my shoes next to it - then I start to walk over his hands - wearing nylons at first. He's obviously in a lot of pain as my weight crushes his fingers into the gutter - but I want him to suffer even more. I put on my leather boots with thin heels and walk over his hands again - then a pair of sneakers - then a pair of boots with chunky heels - then my athletics shoes with a hard plastic sole - and finally a pair of hiking boots. That'll probably teach him a lesson - he told me a few days later he had 3 numb fingers for 4 days - but that's his own fault - he only got the punishment he deserved!

I know what you fantasize about sissy, you want to go ALL THE WAY. You want me to take you, to feminize you, to transform you into the ultimate t-gurl bimbo sissy slut. And you know how much I like turning inadequate losers like you into pretty bimbos! I'm going to make you get huge fake tits just like me, I'm going to make you get lip injections so your lips are like big sexy cock cushions, and I'm going to dress you up like a little fucktoy doll. Get ready for your ultimate transformation.

Your eggs will burst! Just the sight of the pictures can drool and you feel you how submissive you are! The addiction takes its course! Of course you will pay your price for it unworthy piece ..! To be able to stare at this awesome, wonderful ass cost! Of course you will pay ..! Because you're defenseless ... weak ... And I still get an extra toll ... because I know how easily I get your hard earned money ... wait and see! FUCK YOUR BRAIN!

Always interesting to see how you tap Loser cattle willingly in the rip-off case: D. None is so blatantly brazen shit your cash surreptitiously as I !! Sometime and somewhere is always the time for something new and better !!! I am very aware of what I want and I want a lot !!! Stupid fucking girl stuff ..... I'm not interested !! I want the RIGHT MONEY !! And I'm going to reel off suck Euro for Euro from your pocket !! A new era has begun !!! 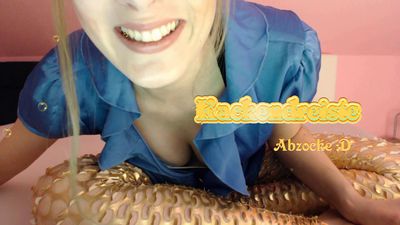 Clarissa and Dorothy are just about to show their merciless sides! Cruelly and brutally they punish the footboy, stomping his belly and chest, trampling all over him, standing on his face and jumping all over his body - in and out of their stinky shoes! Poor footboy tries his best to endure the torment, but there are kicks and jumps he cannot withstand and groans in pain! As time passes he loses all his strength and lies there suffering under his cruel tormentors. His head becomes red, then purple and the veins on his neck almost explode from the pressure! Of course the girls do not miss a single chance to make their victim smell their shoes and lick their feet as well as to get him foot-gagged!

Instead to go on the training, Teodora and Deborah decide to use skinny guy as exercise machine. Small room, the girls in great conditions, air full of lovely girls' sweat and space full of female domination. Solo training for Teodora, trample.

Melissa decided that it was the time to destroy her slave?s TV. The power is in her hands; its decisions cannot be challenged. Look how she is getting her heels in this huge screen TV, with how much pleasure she is destroying it, she jumps, she spins, she destroys it. The TV has become as useless as her slave. 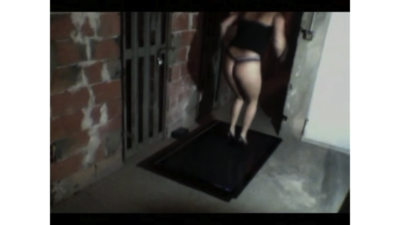 This guy is conditioned by beautiful Sibilla. He tries to flirt with her but she is so disinterested. She can have any guy she wants but it's hard to find the guy who can be pounded into submission, So, she uses her charm to said every wish she wants to him and he must obey her requests. She just says "maybe"... The art of trampling on his belly.