When this woman could no longer handle the abusiveness of her boss, she finally decides to teach him a lesson and put him in his place! While he sips his coffee, he gets on top of his table and positions herself in front of him! Before he could react, she lifts up her skirt and urinates on his face! Shortly after, she grabs him and then throws him on the floor where she proceeds to sit on his face and smother him with her wet pussy! Eventually, she starts urinating again, this time inside his mouth, makes him swallow a couple of mouthfuls! She then later gets off of him, but only to continue urinating inside a glass! She then hands it to the victim and makes him drink every drop of it! When he is finished, she performs her finale which is sitting on his face until he becomes fully exhausted from struggling and fighting for his breath!

The mistress was not in the toilet for three days. Today her slave 00 is present. The slave 00 does not know what to expect. The Mistress orders the SLAVE 00 under her toilet chair. Very pleasurable she sits down on the toilet chair and shits the slave 00 directly into his mouth. Her bowel is seriously full. The mistress uses her living toilet more than eight times until her bowel finally empty. In between, there are delicious NS. That was the hell on earth for the slave 00. A really great KV movie that you must have seen.

Get over here, foot slave! I've prepared something special for you â¦ I've been wearing these warm socks for a few days - and not only the whole day long in these warm boots, but also to the gym 2 times! Now they're dirty and stinky - just like you love them, loser! Come on, shove your nose in there and take a deep breathe. Inhale my foot scent and beg me for more! I bet you loser would love to experience that in real life, wouldn't you?! That's why I'm going to explain to you how to buy a pair of my stinky socks. And I show you how they'll be prepared and shipped to you as well! Attention: I speak German in this clip - but there are also English instructions how to buy my socks included in the end ;-)

I like to walk in pantyhose or sneaker socks at home. Now both are combined and the stockings are on the soles a bit dirty from the floor. So I just spice up two slices of toast - with all my weight I put in socks on the bread and crush it underfoot. First it's just a footprint - then it's flat. Bon appetit - it sticks to the ground and to the stockings. How it tastes after this treatment? 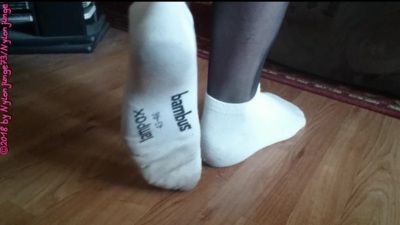 grabbed his neck and put it into submission. âYou'll pay for everything, stinky chump!â, - she yelled at him and struck several times. She laid him on the floor, tied his hands tightly and began to undress. Then she poured her shit over him and clysterized right on this loser! The girl laughed at him and this game gave her great pleasure. She smeared all her shit on his clothes and at the end, just pushed him out of the house as such.

Three short clips with my beautiful butt and tasty shit. In the first clip I have constipation, the poop goes hard, you will see my hemorrhoids. In the second clip at the beginning there are droppings and next nice poop. The third clip I shitting of a beautiful long snake. Look at my sweet, stinky ass and feel the smell and taste of my shit.

Cristina's shit is still green - the activated charcoal has not yet come out completely, but the shit was pleasant to the taste. When swallowing, I did not feel nauseous. Today, Cristina started antibiotic treatment from ureaplasma, so I also have it, because I swallow her shit. Antibiotics destroy the intestinal microflora - let's see what kind of shit it will taste next time.

89513 - Farts on the angel and Italian dirty talking

Today I really have a nice surprise for you ... a fantastic votive angel! Do you want to hear the story of this angel? But before you open your ears I have a lot of huge farts to throw out of my big ass!

ORDER: Hi I would like you to do the same as you did in the last video, but this time you are going to a christmas dinner with friends wearing a tight knee high dress with no bra underneath (which will make your belly look bigger) with heels. When you come back home you show belly from your point of view standing up, before/after belly modelling walking back & fourth, talking about what you ate while drinking a glass of water on top of your bloated belly with belly poking, jiggles & belly slaps Then you take off dress to show the full result modelling cat walking to finish off.

What is it about Brazilian Women that makes them so damn Sexy?!!! I swear these two new ones from Queen Sylvy I personally havenât been able to stop watching!!! If you follow my store, you know I have models from all over the world. But NO ONE is more on my mind at this moment than Queen Sylvy!! When Folks as what I love best, there is nothing I love more than seening a big sexy perfect as do what they do naturally on the toilet!!! I donât need the extras, doing cartwheels and shit, just seeing a woman do what she would normally, with a little finesse and seduction mixed in. I have grown to love all aspects of EFRO, but my initial only love is still my favorite type of clip.Enjoy two new treats she made from an nice and up close angle on that PERFECT ass of hers!! The First clip is quick and FUNKY as she pushes out a few massive, water splashing on the seat logs. But the second scene? Easily the best one she has done for me so far!!! Her asshole was stretched to the max pushing out log after log. Enjoy her sexy grunting and straining as she drops a heavy load!! Then she switches up the angle towards the end so you can enjoy as she rubs her tits and pushes out some more while smoking her cigarette and drinks her coffee. The Coffee and cigarette are both great at helping her get out the final pee and plops stuck in her ass!! This is by far the Hotest one to date!! For all you that love seeing her logs nice and up close this is winner winner chicken dinner!! Her shirt sums it up best â The Boss is here and she came to dominate!! Nobody is doing natural toilet action like Queen Sylvy Right now!!

I just got back from a lengthy walk in the woods and my beautiful red hunter boots are covered in mud and dirt - perfect to torture the slave with them! I order him to lie down on the floor with his chest bare - then start trampling the loser brutally. In between I order him to stick his tongue out to get the soles cleaned on his mouth - before the merciless trampling continues. Of course in the end he also needs to lick the dirty boots again and then wipe the floor clean in front of my eyes. What a pathetic living doormat he is! This is a non-exclusive custom clip for a fan. If you want me to do a custom clip for you contact me at marissa@madamemarissa.com!

My girl Sinnamon is back with three great new clips from work and school. This busy Law Student always entertains me with her delicious ass and equally delicious bowl splashing logs!! Enjoy as she drops bombs like saddam in public along with a lot of great pissing as well! I love watching her logs stretch her tight ass to the limit as they shoot out and into the bowl!!

My toilet and my slaves always agree to serve me, licking my legs and my ass. I like to mock slaves and let them know that they mean nothing to me and should serve only as a thing, a rug, a litter for his Mistress. In the end, as always, I spend the most humiliating and pleasing to the slave action. I fill his mouth with shit, which comes directly from the source and flows through his dirty face. Eat a lot of shit. Eat more than you can imagine. After all, you are an ordinary human toilet.

foreeeeveeerrrr!!! bhuahauahok, this is the CLIP that all the beautiful fartin girls lovers MUST HAVE!buy it right now, and u'll never leave me... i'll be an addiction, it's a promise.Anyhow, in this great MY BEST FARTS COMPILATION u can enjoy15 minutes of fantastic farts and peefor a very special price....u don t buy just a fantastic FARTS but even a pleasure for your eyes, not only for the ears,yes cause im a real lingerie model with some very dirty vices....enjoy these farts..ask me for every kind of custom, and love me ;)

Today you gonna spill a load for my perfect, big tits. When i start to tease you it cant take long to get you very, very close to the edge. I can already hear you beg me to drain those balls of yours. Just a little bit further bevor i finally let you errupt in pleasure and make you drain those balls. These Tits gonna drain you dry today.