Mistress Anfisa's ass is destructive! This whole small town will fall victim to her! She sits down with her denim ass and mercelessly crushes each house one-by-one. She starts by positioning the first house and slowly getting closer and closer to it with her denim ass. She sits on the roof of the house and it cracks noticeably before finally finally collapsing under her weight. Mistress Anfisa enjots this a lot and quickly takes care of the next house. In the end she will only leave pieces of rubble.

Today, I will teach you how to become a GAY and how to SUCK on other man's dick. Yeah, you will enjoy it. I promise. You decide if you wanna go NATURAL or ARTIFICAL way. You always can use on your SALIVA to make your dick WET and SLIDING. I know fucking and smoking TURNS you ON a lot. You can SMOKE on your new BOYFRIEND's DICK. Even if he is just your PROMISCUOUS. Is it your 1ST TIME realizing GAYISH DESIRES? - You can get this video for CHEAP LOSER PRICE (39.99 + VAT).

My new Plateau Boots, with very stron sohleToday a lot of boxes are being destroyed again because they stand in my wayOne at a time, some slowly, some with a lot of powerIn the end everything is flat.

We really left quite the mess yesterday ... I've to clean up! As I sweep the floor, I notice you, tiny guy! How did you get in here and what should I do with you?! Aren't you afraid ... to be there on the ground while I sweep the floor?! You're so small, I can just push you around with the broom ... and pick you up with the rest of the dirt - on the dustpan! I'll just throw you into the trash ... you'll spend your last hours covered in disgusting trash - and I'll throw even more trash on you. You'll be trapped between dirty tissues, dust, ash, food leftovers - and I'll even empty out my vacuum cleaner into the trash bag. You'll be crushed between all of that - or simply suffocate under it! And if you survive that ... I'll close the trashbag and then throw you into the dumpster outside ... the press in the garbage truck will finish you either way! This is a non-exclusive custom clip for a fan. If you want me to do a custom clip for you, send me an email to marissa@madamemarissa.com!

In this hot custom clip, Miss Deviant spells out a New Year's resolution for one addicted stroker - he's not allowed to stroke to her any more. Instead, he must simply hold his cock while Miss Deviant teases him with her hot body and huge 40DD tits. Can you take this resolution and stop stroking to Miss Deviant? Come & find out! 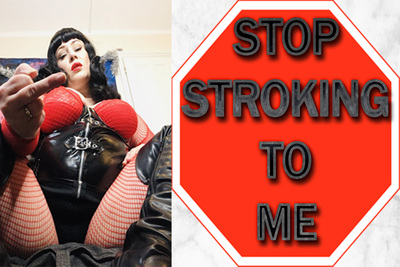 Real dirt on white boots, dirty parking and a cleaning lady who is ready to do anything just to become a slave of the Goddess Pauline. It is not the first time that Polina has to check the applicants for slaves in a dirty parking lot, the girl looks confident and stern. The slave girl very carefully and passionately cleans the boots of the Goddess, because it depends on whether Polina will take her into the ministry...

Nicole has been walking around the apartment all day and her feet are covered in dust .. what does that mean? This means that her stupid slave girl anna didn't take care of the cleanliness of the apartment. What awaits her for this? That's right .. licking Nicole's dirty feet as punishment for her laziness and stupidity. Nicole orders anna to lick her dirty soles and swallow the dust from them. Slave girl anna diligently cleans Nicole's feet with her tongue and apologizes to her. Nicole takes pictures of anna for her collection and shows her the photo to humiliate her even more. "Look how pathetic you look with my dirty foot in your mouth .. a loser!" - Nicole scoffs at the slave girl. "Thank you, my wonderful Mistress!" - Anna answers humiliatingly, swallowing dusty pellets from Nicole's soles.

I teach my slave girls love shit, be in shit, eat shit. It was test of endurance. Maya fell in love with shit so quickly that I decided to see how long she could endure if she wanted to shit, but I told her not shitting. It turned out, quite a short time and more than that, she shitting in her hand, ate of shit and smeared herself. Innocently looking at me and blinking, she said that she ate shit as a punishment for not enduring and taking a shit. Here's sly toilet slut 1. She wants shitting, wants eat shit I tied my toilet bitch in the room and strictly told her to be patient, wait for me and not shit. And this toilet slut, sat sat and still shit herself. She shit in her hands and started eating shit, smearing by face, clothing and masturbating. Well, what to do with her, insatiable and uncontrolled, so loved shit. I gave her dildo and she began satisfy herself by shoving it in her pussy, and fingers in dirty ass. Began lick and suck him, insatiable bitch. IÂll have accept it, I brought up shit-nymphomaniac, insatiable and adoring shit 2. We love being in shit all day I train all my toilet slave girls to shit. I love when they serve me dirty, all in shit, go in this form all day. Usually I have to make slave girls walk in shit, but with Maya it was different. She was happy to stay in the shit all day. Most of all, she liked when I smeared her from head to toe with shit, along with her hair. She is very perverted and insatiable shit eater and shit fetishist. I donÂt mind walking around the house dirty in shit myself. I like smell of shit on my body, I like feel of shit. ItÂs so exciting

Look at this miserable and fat creature lying at my feet. I'm sorry to look at him! He sniffs my sweaty socks and licks my bare soles .. Pathetic loser..Elena..

Welcome in my bathroom. I saied bathroom, cause the wc it suppose to be you. But you are so useless than I can not even use you as a wc. I have to training you to stay still, mouth open very wide, and get all my spitting while I brush my theet, just get out from the shower. And do a good job, otherwise I'm gonna fill in you ass my electric toothbrush.

With all of the ladies grouped together, they no longer waste any more time and start stripping off their clothes! Before long, they are all rendered completely naked and one begins receiving an enema! Lying on her back with her legs spread wide apart, a huge syringe is injected into her asshole and gets her rectum filled with fluid! After which, a dildo is thrusted inside to plug the tight hole but it doesnÂt take long before it is pulled out, resulting in a strong surge of a concoction of wet feces! The next woman then gets her turn and she receives the same treatment! The same goes for the succeeding ladies!

I went all out with this one! I have finally done something IÂve been way to scared to do! I was a naughty scat whore in a shop!!!I have got such a nice big moist load of shit ready to push out of my asshole! I have a feeling that this one is going to come out easy! I really poop my ass out in pantyhose! My asshole opens and all that shit accumulates out of my hole! It drips down my pussy as well! What a naughty shit! ItÂs time to get ready to go out! IÂve got my big pile of shit in my tights and a pretty outfit on! I am in a shop with my dirty ass! Watch me dance around and flash my shitty ass! I am bent over with my juicy ass showing when I realize that a worker is in the aisle! He totally saw me!!! I am so embarrassed and turned on! I have got to get out of this shop fast! I really want to go home and masturbate but first I want to show you my messy ass! I love being a dirty scat whore in public! I am so turned on now! ItÂs time to hurry home to masturbate and cum!Enjoy!

Lying down, with his little cock in his cockbox, the slave suffers my trampling with both shoes and veiled feet. My toy... I sit on that small maggot, crushing it under my ass, and go away...

ITALIAN SPEAKINGToday I'm with my beautiful mistress friend in Milan. We are both feeling very energetic and sadistic. We have bound our slave, and he is ready to receive our punishment. He thinks he has a bit of a pain threshold. Not to today... He is going to suffer, and we will both enjoy it. It's not long before we have him squirming, and squealing under our intense lashes. There will be no mercy as we turn his skin to the colour purple. What a lucky bitch he is to receive a painful double whipping from two beautiful Sado Girls...

The strict Lady Mira is at her best, not only does she dress very elegantly in her black dress, but her dominance ensures that her fans do what she wants. To celebrate the winners, there was a party that was celebrated as the lady intended, not quite like one of her fans imagined, but he had to go through now. But see for yourself how the strict lady celebrates her cake fight party.