I became Lisa's toilet again. In the last days, when I serve the girls in the role of the toilet, I feel greatjoy. Mistresses are returning with whom I have not communicated for a very long time. I really missed them. I really did not have enough communication with them, as well as the smell and taste of their shit. Last time I met Mistress Lassie. And this time I met Mistress Lisa. Mrs. Karina and Lisa invited me to their place. I just came home from work and didn't even have time to change clothes, while they were sitting in the kitchen talking. The girls let me sniff their asses. Lisa's ass was especially smelly, because she was not tolerant until my arrival. Her ass was a little soiled in the shit. After that, the girls, without rising from their seats, shited in the funnel. Karina, as usual, gave a very large amount of crap. It was solid. Lisa gave a smaller amount, but her shit was very sticky and smelly. I served two very beautiful girls in the role of the toilet, and again I felt happy. 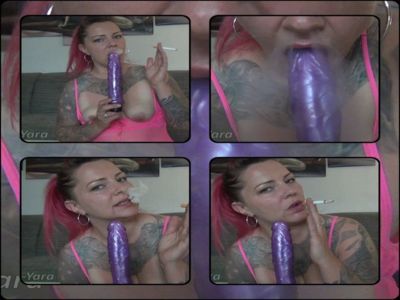 This will take time slave .. I feel so good above your toilet mouth! I cant shit inside it and stay there for hours until you are struggling with my big soft log! There is nothing better than shitting into the mouth! Well, eat your breakfast and clean my ass after I finish!

My Slave have to intensive cleaning my asshole, while I read he works really hard with licking and kissing my butthole he really worship my ass. I could enjoy this for hours.

Look at my sexy body loser. I know everyone with a dick loves to jerk off for me. But i only allow good boys to do that. So are you a good boy for me today? Yes?Will you do whatever i want from you?Yes? Alright then start jerking for me while i tease you with my divine perfection. I want you to say it over and over again: I am a good boy for Princess Kate. Are you excited to know what i want you to do? Hahah get ready to be naughty today loser.

N20_Do you want to feel the power of beautiful young milky girl? Then look;) you will be at her feet, the she will laugh and spit in your face.Video is being shot with a camera that Berte is holding.While she sits on top of a slave, she will spit in the slaveÂs face, shake ashes in his mouth and fill his dirty mouth with saliva.This foulness is then left on his face to further humiliate him outside for anyone passing by to see. Big gobs and small gobs strike his face.

Woooooooow amizing!I spit in his faceMy slave is here, he completely blocked, the only thing he can move is his fucking mouth, that I want to fill, first with spits, then with my left foot, then with the my right one.

My slave has been naughty the past few days, time to teach him another lesson! I make him lean over the radiator and choose my first implement, a riding crop. After landing a few strokes I caress his back with my crop and then just when he feels safe I hit his ass again! Now for some good scratching, IÂm digging my claws into his back and legs leaving beautiful scratch marks all over him. Meooow!Next up is my wooden paddle but I get the feeling that heÂs about to start whining so I take one of my sweaty socks off and shove it into his mouth. Does it taste good? Anyway, back to punishing him some more, letÂs see how much he can take. Alternating between my single tail whip, crop and paddle I give him a nice beating. Oops, looks like a left a bruise on his fat assÂ Too bad, this wonÂt stop me and I move on to kicking his ass with my heavy leather boots!

Today my shit-eater is waiting for a delicious Breakfast right out of my ass. I ate fruit, lots of fruit. The bones are crunching in his teeth. Oh, how nice when living toilet, near. Eat, chew carefully, savor. Lick your lips smacking. Great, smelly, shitty Breakfast, itÂs so healthy and nutritious.

You little creeper like to lick my high heels? YouÂre the worm under my shoes, that little bitch begs for attention? Then you are right here! Since you are scared, you can have fun watching it at home in the corner of this video. Little gnome

Arschvoll ?! ThatÂs right! It shines beautifully red and he is wonderful to see. Spanking is fun and with different implements. From paddle to wooden spoon, Spanking makes a lot of AUWA and red (ass) cheeks;)

College girl is pushing her huge shit slowly in her cotton panties,destroying them with messy shit!She is so excited of her full panties and playng with her dirty caked ass until get off,but she still need to shit,she is so close to you,spreading her asshole for more shit for you.

My Slave love to kiss and lick my feet, I'm relaxing in the Bed messaging with my lover and have a nice and dirty chat with him, while my cuck slave has...

Includes double domination - Mistress Bounty - cock tease - femdom pov - cock control - ebony female domination - female domination - female supremacy - latex dresses - latex fetish - rubber fetish - breast worship - big tits - slave training Don't you just wish you could be right between these two Superior Ebony Goddesses?Only good little slaves get to come close to this kind of perfection. You will do everything in your power to please us both. You cannot resist our commands of you. How could you?Pleasing us is the only thing you were born for. And we are going to smother you with our Dominance and our sheer perfection. Right here in our Dungeon where noone can hear your screams for mercy.On your knees and crawl to your Goddesses now!

There are many reasons why Mr. Balloon is better than a lover: he doesn't drink, he doesn't cheat, he's always ready to have some fun and- if you don't want him anymore, it's pretty easy to get rid of him :D enjoy!

Well, at least you're on time - let me see what you brought for me. Ah, some nice green notes - let me count it! Only 700 Euros? I thought we agreed that you bring at least 1000 Euro each time! But since you're already here, I can abuse you a little for my entertainment ... so get down on your knees ... oh, look, I dropped my chewing gum on the parking lot ... and now I stepped on it with my converse ... guess you'll have to suck it out of the tread ... eat the dirt-covered chewing gum from my shoe soles! And next time you'll bring more to make up for the missing 300 Euro! Bye Bye Loser!

See Lady Titziana again in exciting clothes, her victim is a slave fixed on the cross. Lady Tiziana uses his helplessness to punish him with slingshots of their crops. His slave cock, which gets up, gets his fat away.