Valeria doesn't like when her feet are dusty, dirty or sweaty. It's good that she has many slaves who won't allow this. Valeria knows that christina will cope with this task. "I don't want to look into your shameless, slave eyes. Just clean my dirty feet!" Valeria orders christina and the slave girl begins to worship her dirty feet. christina is responsible for the orders of her Mistress and her tongue quickly turns black with dirt. Valeria is amused by her devotion and at the same time she likes that her feet become cleaner before our eyes.

Goddess Sheila: Isn't it great if I wear shoes for the slave through which my bare feet can be seen? The sole of the shoe is transparent, you can see the soles of my bare feet. My little feet are sweating in the transparent shoes, but before I let you on my feet you will lick my shoes. You can look at the soles of my feet and lick the soles of my shoes. Cool, right? :) Now get down on your knees and start licking my shoes. Pay homage to your goddess.

Mutual love toilet experiments were crowned with success. Emmy and Vey are already starting get used to each other and relax, more and more not being shy. They piss on each other in bed, in the bathroom, Emmy even shits, and Vey is happy offer his hands. She dresses him in women's tights and plays with his ass, stretch. It seems that our couple has decided which of them is top. Emmy was so fired up that she didn't hesitate lay him on the floor and started pissing right in his mouth and on his face at the same time masturbating. Yes, boy, you will soon become her urinal and toilet

this really cool object. He loves to be fucked nice and tight in the ass. This clip is about filling him with my hot sparkling****** ... Lying on his back, he wanks his cock and gets my pee in his mouth ... He swallows and enjoys. As a reward, he too can get rid of his juice today and squirts on his stomach ... 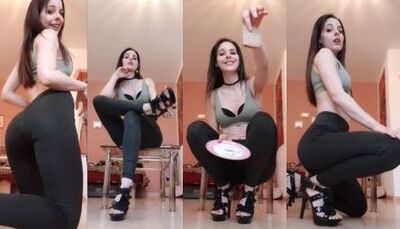 The fact that Goddess Lena has a banana for you is reason enough to let your imagination run away with you, but what do you think she will do with it? One thing is for sure - it's going to be hot! She sits down with her hot jeans ass on the peeled banana and does what she would do with your cock. She crushes it! She makes squishy mush out of it. The mere sight of her sexy jeans butt makes you jerk your cock hard. But what you can see here now pushes you over the edge!

I keep the slave in a cage by letting him out when necessary. And today it is necessary for him to learn the discipline of the whip. I take him out and tie him to the structure. I show him all the whips I have prepared for him and to paint his back with my signs. One blow after another I will make him scream and mark him, until he will not understand and then send him back to the cage waiting for the next punishment.DISCIPLINA DELLA FRUSTATengo lo schiavo in gabbia facendolo uscire quando necessario. E oggi è necessario che lui impari la disciplina della frusta. Lo faccio uscire e lo lego alla struttura. Gli mostro tutte le fruste che ho preparato per lui e per dipingere la sua schiena con i miei segni. Un colpo dopo l'altro lo farò urlare e lo marchierò, sino a quando non avrà compreso per poi rispedirlo in gabbia nell'attesa della prossima punizione.

Will the slave use his second chance and prove to Mistress Anfisa this time that he is a good pony? Mistress Anfisa will soon find out! She sits on the back of her mini pony and lets him carry her around. She rides him consistently and with a lot of patience, round and round in circles. Mistress Anfisa can see the slave finds his task difficult, but she makes him continue, torturing him beneath her without mercy. He still has something to prove!

Goddess Sheila: After a sociable evening, Goddess Sheila relaxes in her pink dressing gown. She takes off her pink fur slippers and presses her human footrest with her bare, little feet in the face. Goddess Sheila shops on the internet and ignores her foot slave under her feet. She asks the foot slave to lick her bare feet clean before showering. To clean your feet from foot sweat is the job of the foot slave. She rubs her little feet, shoe size 36, over his slave's face. He has to stick out his tongue and use his tongue as a foot washcloth. She uses her human footrest every day while relaxing. Do you want to become a human footrest too?

Today our slave will be crushed by our feet and by our powerful asses: after that, he will suffer the devastating farting of the two goddess. In this video Delvia Sovrani will beat her own record, farting for 9 seconds in a row! The most powerful fart of the century!

I'm so sexy and young you know? 😉 And I wanted to prepare a very tasty snack for you! I bend my big chubby ass over plate and spread my cheeks wide and take a dump! 💩 It smells very disgusting which is great cos you love them absolutly stinky. Enjoy! 💕

Today I am really taking my Audi S Line, I want to torment it with my cute Flogg sandals with perfect nails. A perfect cold start and the engine has to suffer, yes, it literally screams under my feet, I can feel how he torments himself, that gives me particular pleasure in getting the engine up to temperature.Now he has to go to the workshop first, no trouble for the 6 cylinder engine, he just has to go, that makes me really hot

The foot slave also has to learn what his duties are, to eat my shit and drink piss. But not just like that. I've prepared a special humiliation for him. He'll lick everything out of the toilet. And I show no mercy until the toilet bowl is licked clean. The spike Heels in the clips are for sale, have a look in my shop.

My shit-eating Maya is a very special girl. She became so addicted to shit so quickly that I didnÂt even have time to blink as she began to eat both my and her shit. She quietly shat, smeared and played with shit. She liked it so much that I tried to limit her at one point, but it didnÂt work. She still took a shit in her hand, ate a lot of shit and smeared in shit, looked and clapped her innocent eyes, saying ÂIÂm sorryÂ, but there was no remorse in them. I was admired of her at the time, but of course I didnÂt show it1. Cums with shit, eat shit, canÂt without shitJust before leaving her parents, this toilet slut still couldnÂt resist, shat a lot of shit and started smearing it on herself. Smell and taste of shit turns her on, excites her, she smears, licks her hands, eating and tasting the shit, dirty masturbates. Her libido and attraction to shit is off the scale, now she canÂt live without shit, she cums with shit and in shit, now sheÂs forever toilet whore2. She much addicted to shit, canÂt resistHer desires and aspirations are getting stronger. Now so much addicted to shit, she canÂt resist dont taking shit, smearing on herself, tasting shit. She quietly, looking around and hiding, shits and enjoys smearing shit thickly on her face. Smearing shit on the strap-on, moaning, she sucks it like shitty lollipop. The taste of shit is now pleasure for her. Satisfied, she lights cigarette with dirty hands and all covered in shit