The slave will now lick the latex pussies of Lady Alice and myself! The slave must lick us for as long as we want! Sexy latex facesitting! Part 4 of 5 of the video 'Latex Dreams'!

Mmmm....going blue...just like the color of my perfectly, pedicured feet! It will be so worth it when you are down their worshiping and stroking, I promise.

Murderotica and I are back on the prowl in search of girls who've never trampled or stepped on a man before. Armed only with a wallet full of cash and a camera this is one challenging series that's extremely difficult to pull off. Luckily, thanks to Murderotica, we were able to find someone new! The new girl wasn't comfortable stepping on me in public, but surprisingly she agreed to join us for a small indoor scene. Only concern (for me) was the length of her heels!The video is directed and filmed by Murderotica! She holds one camera and there is a second camera stationed at floor level. There is also RARE behind the scenes audio footage after the end credits of Murderotica and I discussing scenes with a few good laughs.

I know that Goddess has to do all the thinking for losers like you. But only this one time i want you to use your braincells. You must truly understand how kind i am and how grateful you have to be for me. What are you without Goddess? Right Loser! N-O-T-H-I-N-G Your life is sad and empty without my divine being. Goddess gives purpose and you better show me your gratitude the right way. Let give you some ideas how you can show it to me and make me smile.

A girl sits in a bathtub full of foam and is playing with her feet. She is rubbing each foot against the other and is playing with them in front of the camera. Then she takes a shower and washes the foam off her feet. She puts her leg on the tub and starts to wash her feet with liquid soap. After she has rinsed them off with water, she carefully dries them off with a white towel. Time 9.32 min. Remastered - movie from 2006

Experience the passion and fascination of Mistress Carter's divine feet and exquisite shoes, in a cinematic declaration of love in 2 parts! Since pictures say more than words, I am silent now and wish you much enjoyment of the movies!

She's eagerly burying her face in his stinky, sweaty arse crack after they've both just had a gym workout. Close up shots of her sniffing his smelly shithole whilst he plays with his cock. She moans with pleasure as she inhales his musky bum smell. She also sniffs his sweaty armpits. We inspect her hairy sweaty bits and dirty post workout feet at the end. Her vagina is soaking wet after sniffing his sweaty, stinky arse and armpits...

Does your wife know how much you ache for me? I might have to start dropping hints so she finds out. You're such a weak boy for me- Now get on your knees and show me who owns you!Have a pair of your wife/gf panties close by

Mistress Michelle and her friend use a toilet slave together. First, the two ladies spit in his mouth. Then Mistress Michelle shits him a tasty Kackwurst in his slave mouth, which he must chew and swallow under strict supervision.https://www.yezzclips.com/store598

Mistress Erika has her sights on breaking in the pathetic slave in her dungeon, and she wants nothing but maximum obedience to her every whim. Her pure black dress is the venom of pure evil, and her entire body is in pure pain. Pressing down on the shit slaveÂs belly, who began to gurgle because he canÂt breathe properly, Mistress Erika gripped his face and pushed her fingers into his mouth, to loosen his throat. Pushing her fingers into his mouth, she twiddled with his tonsil until she felt him gagging and heaving. A warm, ballistic torrent of puke welled up and exploded, and Mistress Erika clamped down on the shit slaveÂs mouth to stop it. The puke ballooned inside his mouth, and Mistress Erika laughed as she watched him struggle with the burning acids of his own puke in his throat and mouth. Gagging and sputtering, he turns to his side, releasing undigested rice and meat granules on the smooth, hardwood floor. The mistress pushes him to his back again and proceeds to surprise him with the largest turd he will ever have the fortune of meeting. He couldnÂt see anything because of his blindfold, but he felt the massive turdÂs tip touching his nose first before it invaded his worthless mouth. The tip was thick and irregular, and had a strong musky scent that reminded him of meat and foul cheese. The mistress moaned as she pushed out more, releasing tiny farts and squelching noises as the massive shit evacuated and welled up outside her stretched butthole. Mistress Erika pulled up the shit slaves faces and mashes it against her plump butt. His tongue launches out, making sure that it got all of the remaining shit from the mistressÂ smeared butthole. After cleaning her good, she pushes him to the floor and begins trampling him again with her painfully heavy, high heeled boots. The tip of her boots dig into his frail skin as she dominates him completely. Pulling his hair painfully, Mistress Erika unleashes a tirade of humiliation on the manlet slave, who still has a good amount of shit paste swirling in his mouth. His forehead to the ground, he feels her trampling him once again, this time getting whipped as she buries him with the weight of her high-heeled boots.

I start this session by making the slave lick the soles of my flats while I sit on his stomach - then stand up and start trampling him! I walk all over his chest and stomach before I start really torturing him by standing on his throat with my full weight. I know his ribs are really bruised from the previous session and he has trouble breathing when I'm standing on his chest as well - but he better doesn't expect any mercy from me. In between I order him to kiss and lick my flats - this time while I'm standing on him of course. And in the end, I even take off my shoes and order him to lick my bare feet!

N09_Bertie crushes my throat Dirty Foot Domination POVYour task is to be a rag. Today you must to lick the big and beautiful legs of your Mistress. Bertie is standing over you and helps you. All your face and mouth are in Mistress's spit. She is strict, and carefully monitors that your tongue penetrates between your fingers and licked everything

The nightlife in Berlin is notorious for its exsessive party and club's! And so it hardly surprises, the fetish and Squirtingluder Viola, who could not resist! Mistress Carter is not enthusiastic about nymphomaniacal activities, your Swiss guest lady and so viola must confess in a bizarre interrogation, all her crimes of the mistress!Mistress Carter can hardly believe the words of her new slave, and so she convinces herself, with the help of fingers and speculum, after state Viola's greedy holes!After Viola's confession, there is also the punishment with ice cubes and spanking!But as Mistress Carter also has compassion for your lustful slave, the punishment is transformed into an erotic torture to give Viola an unprecedented Squirt-Gasm! Dildo's, Massage Stick, Fingers and Mistress Carter's Divine Breasts to transform

Nashita is just relaxing and reading her book on the couch, but she felt like something was just missing on the floor to serve as a footstool, and to rest her tired feet. How about a human footstool? She just calls her slave in the room, and makes him lay down on the floor just to use his face as a footstool! That was a very long summer day with her sneakers on, so she she just takes them off to completely cover his face with the bottom of her stripped knee high socks! The smell was so intense, and she totally knew about it, so thatÂs probably the main reason of her cruel smile! She takes pleasure to rub her stinky socks all over his face, and makes him lick the dirty bottom of her socks while she was just relaxing, and reading her book! Nashita also felt like she needed to give some fresh air to her feet, so she just takes her socks off, and smothers his face again with her sweaty naked feet! It seems like his face is just the perfect footstool. She makes him take some deep breaths in her feet, just to give them some fresh air, and makes him lick the sweaty bottom of her soles! That is just so refreshing after a long day! There is nothing like a good slave to serve as a footstool, and clean the bottom of her feet! ThatÂs what she said.

Mistress Erika pulled up the shit slaves faces and mashes it against her plump butt. His tongue launches out, making sure that it got all of the remaining shit from the mistressÂ smeared butthole. After cleaning her good, she pushes him to the floor and begins trampling him again with her painfully heavy, high heeled boots. The tip of her boots dig into his frail skin as she dominates him completely.

Amina participated as invited G/F in some non-disclosured movie. Now I invited her same way as previous initiator ÂAnneliyaÂ . Amina showed herself as not bad blower. Just a couple of years passed, and what do we see? Amina grew even bigger (should be about 175cm), but she blows weakly. Some invited girlfriend (probably named Ann Â nevermind, I donÂt remember) who is fatty and definitely non-sporty outperforms Amina in test run with that ugly small punchballs.I consider my filming as important event in girlsÂ life but Amina barely could remember that "something like this balloon filming" took place a couple of years ago.

Look at me. Can you see it?Yes i am greedy af and i want more. Do you understand that? I WANT MORE repeat after me loser.Over and over again until you understand and know what to do.

Faye is wearing a completely soaked Lille and it is time for a change! She gives you a quick twirl to show you just how puffed out and pee soaked it really is. She has a nice fresh Tena slip Maxi - her old faithful - to put on. But first she has to take off the soaked Lille which she has fastened with home made diaper tape. Once she manages to remove the Lille she holds it up to show you the pee soaked inside - it is do yellow and obviously pee soaked. Then she lays back and pops on her nice fresh diaper giving a little bum wiggle to get it comfy once fastened. Before signing off she gives the Tena a bit of a rub making that fabulous crinkle noise. 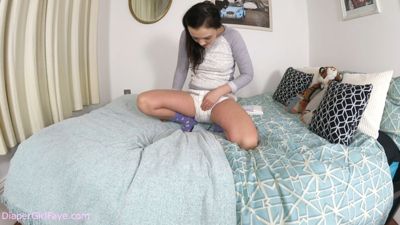 I order the slave to clean my leather riding boots with his tongue - but this loser dares to act up and tell me that he doesn't want to lick them anymore. I guess I'll have to discipline him! I put him over me knee and start spanking his ass! I put a wristlock on him to keep him in place and mercilessly hit his ass again and again - not only with my hands, but with the riding crop as well. I'm laughing my ass off while this loser screams in pain - this is way more fun than I thought! After a while he begs me to be allowed to lick my boots again - but his punishment isn't over yet - I want to make sure he's not only licking my boots this time, but also refrains from acting up in the future!