Kiss my ass. Lick it clean. I just want to shit and use my slave instead of my toilet. I'll give you more shit. Open your mouth, I'll fill it with shit from my asshole. Look at his face )) mmm, it's all smeared in my chocolate!

Another perfect double domme movie with Goddess Luna and her friend !In today's clip, Goddess Luna called her best friend to the hotel to make fun of her slave with her. First they put a device on his penis and balls and sat on the slave's face wearing only a pair of pantyhose on them, without panties. After coerced him to lick and suck their wet hosiery, Goddesses humiliated him and made fun of his penis, which grew very large in size while he could not breathe. After this, Goddess Luna called her slave in the bathroom, to empty her colon in his mouth. To be more bizarre and kinky, Mistress Luna puts water in her ass and expelled a huge jet that simply drowned the slave coerced him to swallow absolutely everything that came out of her gorgeous ass! A gorgeous action with your favorite Mistress Luna.This is a movie you must have it, only from here ! Only the best romanian ladies in our shop !

Jessica invite a friend to her home. They are sitting on the couch in the living room zucnÃ¤sht and talking normally. But after a short time benefits Jessica the opportunity and Bobby approached in an unguarded moment, from behind. She pressed the cloth with the ****** on the mouth and after a few seconds already Bobby falls into unconsciousness. When he regains consciousness after a while, he notes benonommen he is tied up in another room, lying on a bed. And since Jessica is again. Bobby can not say anything, his lips are sealed with tape and bound his hands and feet with ropes. In this helpless condition he must now serve as victims Jessica. Stzt you with her voluptuous naked ass on his face and robbed him breathe the air. This gives the cruel Superblodine the abolsuten kick: when they handcuffed a man and can mistreat defenseless with IHRM ass. The next day she leaves Bobby Sun gefeselt on the bed and lie whenever they feel like throwing it gets with her juicy ass on his nose and buries them underneath. Once she comes home from work, now enters the room and abused her for Bobby facesitting Kick.Bobby have these ordeals helpless for days.

We came after a party with my girlfriend to my house. We were a little drunk and were given lesbian caresses. She licked my pussy and kissed my lips. Near on the floor was a toilet slave. I took off my panties and pushed them into his mouth. I spit in his mouth and he sucked my shoes and heels. He opened his mouth wider and I shit on his face. I pushed into his mouth the remnants of half-eaten shit. You are my toilet, and you must always be ready to eat my shit, stupid scum.

I'm wearing yoga pants and rubber boots. I write right in my pants and this is seen in close up. now i am stepping on my friend's dick with my big rubber boots. its member has become much larger and more resilient. Now I sit with my big ass on his cock. I like playing with a friend like that. 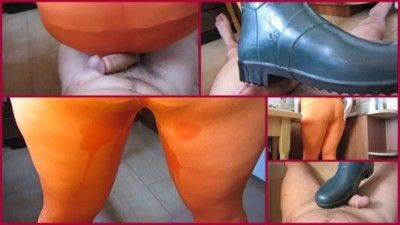 I play with myself in jeans, posing in front of the camera. I put my hand in my jeans. Then I wrote and shit in jeans and warm shit spread around inside. I also played in dirty jeans, showed you my dirty ass and put on jeans again. Madly in love with you!

Yana and Olga love to experiment, in this video they decided to arrange a small but very dirty show, the girls agreed that they would take turns shitting on each other and smearing their shit on the body of a friend . The first one decided to try out Jan . Yana was already naked and lying on a small table, Olga went to Yana and began to caress Yana's chest, but it's beautiful, girls love to caress each other . At this moment, as Olga caressed Yana's chest, Yana lowered her hand between her legs and began to caress her hairy pussy , but Olga already wanted to go to the toilet . Olga turned to Yana with her ass and started shitting on the naked body of her friend , but it's gorgeous . Then Olga started smearing her own shit on Yana's body with her Tits . Smeared on the naked body of Yana shit girls changed places and now Olga is lying on the table and Yana shits on the naked body of her friend, putting a big pile of shit Yana sat on this pile of ass and began to smear the shit with her ass on the body of Olga, two girls and both are almost completely in the shit , at the end of the video Yana pisses on her friend on the naked body of Olga run streams of urine and shit .

During my break from filming, the camera continued to run, just the right cut-out for another ignore clip. Because let's face it, my ignore clips are only good for one thing, so you spend money on them xD

150532 - Training in the stable with Mistress Kristin

Our slave is hung on the pulley today. Together we whip his back until it is colored red. The pinwheel is not enough over the tail and sack, he should feel candle wax. Oh yes, it is hot and he wails ... Then the cooling with the garden hose follows. At the end Kristin gets the juice out of the sack. Hanging nicely overhead, he drips on the rubber boots ...

I know you're intimidated by me, knowing that you could call me and actually speak to me is making you quake. Just thinking about hearing my voice tell you what to do...that's why I'm going to make you get nice and fucked up for me on those AROMA SNIFFERS and I'm going to tell you when to sniff, when to tribute, and exactly when to call me.

125529 - Valeria Valkiria whips and humiliate one of her slaves!

'Obey and serve your whippings! In this video I find pleasure in the Art of whipping! The poor slave receives my whippings and my tortures to his genitals! Enjoy!' 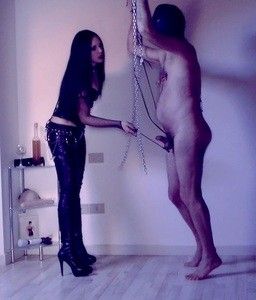 Incomparable brunette mistress Kristina has bought new sexy underwear today, and her ill-behaved slave will be the first one who tastes babeÂs white panties. He seems to like it, so beautiful Kristina makes up her mind to reward the fella and feed him with her clean-shaven pussy that looks wet enough to be eaten by the nude male slave.