The group of girls huddled around in a circle with their butts in a circle, in the air. A man approaches them and picks out Manami, who had the pinkest skin, and the most perfect face. She is ready for the audition, the man says. Manami was ready to jaunt her stuff in her cute costume, but when she opened her eyes to several men with raging hard dicks, she knew she was in for a rough ride. On the ground she couldnÂt move because of all the hands that were tweaking her taut nipples and her sopping pussy. She was beginning to lose control of her body as she was overcome again and again by waves of pleasure from the many hands that craved for smooth skin and hot pussy. One of the gangbangers came in with an enema that was almost two feet long. Manami gasped as he pushed the tip inside her asshole, immediately filling her belly with sick enema. They began fucking her, only taking breaks to fill her butthole with more sick enema juice. ManamiÂs body was wracked with little earthquakes as every inch of her body was being mashed, licked, fingered, and fucked. Manami was on all fours when they pushed the thick rubber tube insider her ass. Her anus resisted the invasion, and she moved her butt in an effort to evade the men. They spread her anus even more, giving them the most perfect view of the smooth, puckered hole they wanted to fuck hard. ManamiÂs eyes was in tears as multiple hands squeezed and mashed her breasts, as they dumped more enema juice into her butt and belly. She had never felt so full in her life. The men slurped her leaking butthole hard, sending her into more waves of pleasure she could no longer control. ManamiÂs body flopped around for being pounded hard. Her belly still felt full, and she felt that any moment now, she would release another milky stream of stinking poo. The men began taking turns pounding her extra hard and extra fast, before jetting ropes of slimy cum on her pretty face.

Let's talk about my awesome feet. Fresh after the pedicure. The drool runs out of your mouth when you only see the preview.Clip Language: German

The two findom Ladies Hanna and Jane are used to getting their lives financed by slaves like YOU. For this reason, they have summoned you to show you their shoes. From the ladies point of view they are no longer usable and you will take care of new ones! YOU will immediately cough up the money for new shoes! Queen Hanna and Mistress Jane hold out their hands demanding your money. Give them what they want! NOW!

Alisa has been walking all day long with her sneakers, and she has been wearing the same pair of socks for almost a week, so she thought it would be nice to use you as a slave, and have you take some good care of her feet! She just teases you with her sneakers on, before she takes them off to completely cover your face with her sweaty white and pink socks! The smell was intense, but she wants you to smell them without complaining, and give her a nice foot massage! She wants you to take some deep breaths in her socks, and she also wants you to lick the sweaty bottom of her socks! Alisa felt like she needs to give some fresh air to her feet, so she also peels her socks off to rub her sweaty naked feet in your face! She wants you to smell them again, and she wants you to do the best as you can to lick and clean the sweaty bottom of her soles! She also wants you to suck on her toes, one by one! She is actually planning to keep you down on your knees, until she gets full satisfaction of your work, so make sure you are doing your job right!

ENGLISH SPEAKINGI have a slave that requires some slut training, and I'm joined by my beautiful mistress friend. It should be a lot of fun and we will show him no mercy. With him naked and wearing only a collar, he crawls on his hands and knees as I lead him into the dungeon on a tight leash. My friend is already relaxing on a stool, and a little excited as our slut arrives. I get him into position and tell him he's going to obey all our instructions. Any disobedience will be severely punished. We begin by getting him to kiss our feet, as usual our beginner slut gets confused and tries to lick our feet. We quickly give him a few smacks with his leash and order him to pay attention to what we say. As we change places to allow him some foot worship, for some reason our slut keeps moving out of position. It's time to give him some strict discipline, and with him on his knees I go behind him and tell him to open his legs. what a sight, his balls are like hanging fruit. I give them a few kicks to warm him up for whats to come. As he's being a stupid slut, we take turns at holding him with his leash and giving his balls a good kicking. I then pull him over to the cage, and while sitting on top of it using his leash I pull my sluts face hard against my feet. He also has his legs spread apart, and must remain standing. My friend has a nice rear view of his hanging balls, in quick succession she crashes her foot into them. I so enjoy hearing that nice clap as her foot finds it's mark. Our slut squeals and cringes in pain, and can't escape his painful punishment as one kick follows another. We finally allow him to show his gratitude by kissing our feet, before leaving him on the floor to suffer from his bruised and battered testicles...

The lady receives a location with the post and is asked to follow the way which is descripted at dawn.arrived at the target are shining pumpkins and halloween masks. The lady got up for that? She crush everything in rage till the last light is off.

A dominant young woman tramples one of her admirers. She works with her shoes on his body. She spits on the ground to have him lick her spit. She makes him clean the soles of her shoes with his tongue.

Lisa Marie has already damn near shit in every place of her apartment in a very short time!!! This time she takes the action to bathroom, to drop two sexy, seductive, FUNKY batches!!! Enjoy as she Gives a nice ass grabbing ass slapping, booty shaking showcase before spreading that big ole booty nice and wide to unleash two delicious loads in the tub!!! Enjoy as she wipes and shows you her FUNKY mess As well!!

029__ From the very morning the slave begged his Mistresses to feed him. The girls were in a good mood, so they decided to treat him with a juicy and tasty lunch. Their drooling flows out of the mouth without stopping. They scornfully look at the humiliation. But the slave must pay for such a delicious lunch. The girls had a plan in advance. They smoked and made a big puddle of saliva and grubs on the floor, made him eat, lick up every last drop, and then the slave should lick saliva on their soles. They are happy of the slaveÂs humiliation for the sake of such food. They decided to do it once again.

You're gonna eat every last piece of our shit, loser! Don't ask me for mercy! You got what you want. There is no way! Now you will be our toilet for life. What you said? You can no longer eat everything! Otherwise I'll beat you up. You're pathetic! If you puke, I'll feed the vomit back. You will eat everything I give you!

All night, time after time, I've been running shitting. Sweet, smelly diarrhea with crack and farting escaped from the ass. A strong stream of Golden rain accompanied this shit-fall. For You, my dear audience, three videos shot this night. For You dream to be in those moments near, the bottom. This is a great show, I love diarrhea, I love you all!

Imagine, your chicken would catch you paying me right now ... It would amuse me and you would come in need of explanation!Clip Language: German

It doesn't matter if you are addicted from the first time you saw me, or if i need a little work to make you mine... Some of you might even need a year of teasing... The only thing for certain is, that in the end, i'll always get what i want!

ITALIAN SPEAKINGToday I'm with my mistress friend here @DungeonRoma and we are going to allow a couple of slaves to experience the privilege of licking our boots. We have dumped some sludge on the floor and our ponyboys are going to clean it up. We haven't told them what their little taste buds are going to be tasting, we want then to suffer and make sure they clean all the mess. With our perfectly polished boots, we begin by walking all over the messy substance. With our soles nice and dirty, we call over our ponyboys and order them to get their tongues going. I know they don't like the taste, It's a nice little toxic treat. We get them to continue to roll in their mess, while we stand over them looking down on them. They are so pathetic, and we spit on the floor as we continue to make them worship and clean our boots. It's a lot of fun having our ponyboys under our under boots, as they grovel and squirm in their pony sludge...

028.. Be an ashtray for two tall ladies. They want to smoke and think of nothing. You are nobody. You're just an ashtray. Sit on the floor and do not move. You can't distract Miss Julia and Morgana because they want to be in silence. You're just an ashtray and plate for spitting. The girls have a mouth full of hot saliva and donÂt know how to get rid of it. But there is you who will get spits in your mouth and face. Shut up and be a good boy.

Today I had got the wish I should get going my plump body in Leggings and a white blouse. With light sports movements I move before the camera and my bodies point you. 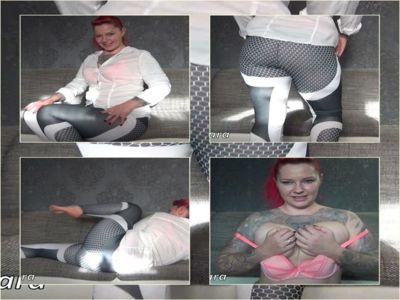 Sara shows you her hot ass, hiding her sexy string thong. Teasing, she carefully pulls it out of her jeans to show you. Sara's ass looks extremely hot in the blue jeans, thee thong makes the sight even more sxy! You want to see this and she knows it!

You are such a pervert for peeking.What color are my panties? You are such a naughty little man. I know all your dirty dreams.I know your favourite panties are white cotton one! Go ahead and take a peak pervert, I know you cannot resist!