You belong to the pathetic species of mini cocks? Very good for me! The smaller the cock, the higher the financial compensation. Mini cocks belong financially ripped off.Clip Language: German

The slave Yza had permission from Princess Jessi to use one of her slaves.Then Yza humiliated the slave exactly as she suffers, having to lick shoes and feet completely dirty.The shoe was very dirty as you can see in the preview of the video! The slave had to lick everything and Yza spit in the shoe for the slave to lick the dirt with his saliva.Then she orders the slave to remove the shoe from her feet, and start licking the soles of her feet, Yza's feet are very beautiful.Jessi will check if the slave is behaving with Yza, so she notices that Yza's feet are very clean, so she orders her to go to soil the soles of her feet on the car tire, then she comes back with the dirty soles and the slave is ordered to lick.In the final part of the video she abuses the slave's throat, she sticks her feet in the slave's throat making a Deep Feet, she does in different positions. Yza has fun using the slave

6919 - Merciless Trampling - Ladies Tailor Pays to be Over Smart 2

In this Merciless Trampling clip, Most beautiful and cruelest Indian Mistress Sanah continues to dominate her tailor. She makes him lay down on ground top less. She starts trampling him under her full weight wearing her heels. She keeps stomping him and kicking him throughout the clip. Furthermore she tramples his face wearing heels with her full weight. Most cruel trampling clip you have ever seen by indian mistress. Furthermore she jumps on his chest wearing heels. Must have clip for all trample lovers. Especially for fans of Mistress Sanah.

I am in the park smoking a cigarette. My LONG NAILS HAVE LAVENDER POLISH that glistens in the sunlight. Get close to me as I blow smoke and enjoy my cigarette. Then watch me step on the cigarette and twist it out with my BLACK LEATHER THERESAS.

You would think the title says it all. Well, it doesn't. In the beginning of this video, I trampled my fan with my BARE FEET! Then I put him in my cock box and smashed his cock under my full weight. Next, I used my sharp finger nails to gouge his ball sack and rake my nails on it until it was raw. Following that, I dug my nails into his foreskin and jammed by sharp toenails into his balls. As I jerked his cock, I scraped his shaft with my LONG RED NAILS. Finally, I stroked his hard dick and made him squirt a huge load of cum into my Black Patent Peep-toe Pumps. So you can imagine how long the title would be if I highlighted all of that!

First, Lady Emerald captures the slave with his hands on his back, then begins her mouthfeel session. Look at the Dortmund lady in her sadistic game, enjoys her verbal dominance in connection with her hard faceslapping game. At some point it is too much for the wailing slave, he can not hold it any longer and just tumbles ...

I sat on my toilet slaveÂs face, started shitting, and he dropped it. Eat the toilet, IÂll stuff everything in, eat everything. Chokes, canÂt breathe, swallows fast. IÂll help him with the whip. The flogging stimulates the process of taking a shit inside. Now letÂs sit on his face with our ass. Swallow, I wonÂt get up until you eat everything. Now lick it. Ugh, your tongue and face are dirtier than my ass. Now your mouth looks like an ass, covered in shit.

This stupid slave has served his time as a foot rest. Now, Mistress Sabrina wants to ride him like a pony. She sits down on his back and drives him forward, riding him round and round, giving him some cracks with a riding crop on his lame slave butt. He really is a lazy slave pony. His walking speed is much too slow. Run pony! RUN FASTER! Mistres Sabrina asserts herself and rides him hard and until he can't take any more!

Part 2 of the Video (Part with bed is another video)Hier humiliates Mistress her slave for his bad behavior. He licks her filthy boots and cleans it with his tshirt 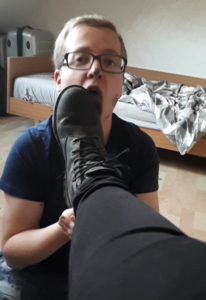 I wore my THIGH HIGH PLATFORM BOOTS to give Trampleguy a run for his money. These boots have a thick heel and an equally thick platform that can be extremely unforgiving to the flesh beneath it. With my new SONY HD camera vividly capturing the action (this camera continues to amaze me with it's perfectly focused picture), the whole scenario is here for your masturbatory satisfaction. I made sure my BOOT HEELS stood on Trampleguy's head and neck as well as his cock. There are multiple camera angles and lots of great POVs.

A keyboard crushing in an aggresive style. Gamer keyboard are realy strong but the lady really want to destroy it! The lady will crush it into every piece but its taking the breath after this dynamic crushing!

Mikaila knows how bad you are addicted to her precious feet, so she likes to take pleasure to dominate you and just take advantage of your foot fetish! That was a very long day with her socks and feet inside her sneakers, so she makes you bow down on your knees, to let you take some good care of her feet! She just teases you with her sneakers on, before she takes them off to completely cover your face with her sweaty white socks! She wants you to smell them, and just enjoy that lovely smell! She makes you take some deep breaths in her socks, and lick the sweaty bottom of her socks with your tongue! Mikaila also takes her socks off, just to rub her stinky feet all over your face! She makes you take some deep breaths in her feet again, and makes you lick the sweaty bottom of her soles! She also wants you to suck on her toes, while you are probably jerking off her feet! She would love to see you cream her sweaty naked feet with your warm cum!

ITALIAN SPEAKINGCUSTOM REQUEST - I would like to see you together with another friend in the role of two elegant, spoiled, rich and very mean women dressed in a suit with a skirt and wearing black stockings. You humiliate your slave Frank, and get him to sniff both your feet. The video begins with you and your friend who comes home after spending some time shopping. you find the slave behind the door waiting for you, and you immediately start to humiliate him. First with verbal abuse, then you give him strong kicks with your very expensive shoes on the chest face and head. Then you clean the shoes rubbing hard on the tongue of the slave almost to make him cry from pain. After having cleaned the soles well, you both sit down on the sofa. You call the slave and tell him to serve your favorite champagne. Once he has served champagne, you order the slave to kneel while you tightly tape up his mouth. You then take off your shoes, put your feet on the table and make him smell your beautiful silky pantyhose feet. To make sure he is obedient you both give him some foot slapping, and tell him he is now your permanent silky foot sniffer...

4 Shit's bombs are falling into mouth. A favorite way for girls to use a toilet is to use the fixed head of a toilet slave with opened mouth. This time I had to fully experience this method on myself. I was completely immobilized, I could not stand against. My head was under the toilet seat. I was alone in the room, and I waited with excitement for someone to enter the room, sit on the toilet chair, and I will have seen MistressÂs ass above me. Girls began to enter the room one by one to use the toilet. Four portions of shit hit me in the mouth. Good boy! - Mrs. Karina told me, which was the last. And I was left alone again with a taste of shit and urine in my mouth.

Mikaila knows how bad you are addicted to her precious feet, so she likes to take pleasure to dominate you and just take advantage of your foot fetish! That was a very long day with her socks and feet inside her sneakers, so she makes you bow down on your knees, to let you take some good care of her feet! She just teases you with her sneakers on, before she takes them off to completely cover your face with her sweaty white socks! She wants you to smell them, and just enjoy that lovely smell! She makes you take some deep breaths in her socks, and lick the sweaty bottom of her socks with your tongue! Mikaila also takes her socks off, just to rub her stinky feet all over your face! She makes you take some deep breaths in her feet again, and makes you lick the sweaty bottom of her soles! She also wants you to suck on her toes, while you are probably jerking off her feet! She would love to see you cream her sweaty naked feet with your warm cum!

Gentaro was nervous but made sure that he didnÂt let the Mistress see it. He was going to get punished again, for sure. The Mistress sat on the toilet and felt her belly around before ordering Gentaro to open his mouth wide. She didnÂt want to waste a speck of her shit, which she had been saving since morning. Gentaro was mesmerized by the shape of her anus, and how it would open so slightly when she farted on his face. The warm, stinky drafts of air smelled of fresh shit, and he knew that the shit was already there, ready to be unloaded. She started pushing at the shit from within and the tip, already hard and round, tried to fork before settling for a rounder shape that fit GentaroÂs mouth perfectly. Gentaro had to keep his mouth wide open, no chance for resisting, and not even a speck of the acrid-smelling turd escaped his mouth.

This video contains scenes of much humiliation where the slave was punished and humiliated for not having cleaned right of the bathroom of its owner. The mop was filthy with a lot of dirt from the floor and the slave had to lick the mop, then Mistress Beh decides to make things worse for the slave, she dives into the dirty toilet and rubs on the slave's face the filthy mop with water from the toilet Black of filth, the slave still on top had to drink water from the toilet directly in the mop, much dirt the slave swallowed was cruelly humiliated, this scene is repeated several times, then Mistress Beh orders the slave to lick all the floor of the bathroom she still Spits on the ground for slave licking and also orders the slave to lick the toilet and then she puts the slave's face inside the toilet and makes her lick the water in the bottom then pulls the discharge and a bath in the dirty water slave . Strong scenes of much humiliation.