Maniacs are the worst kind. They are silent and strange. But here is a great twosome to deal with it. Sonny, smaller and strong with a lot of domination, and taller Britney, crazy for fun and insensitive. Full weight FS. First Britney, then Sonny.

Will you still love me if you will know Im a Toxic Woman? Will you touch my lips and my nylon legs if they will be soaked by poison and this is ki!!ing you slowly? How can you fight againt your deep sexual desire? You are feeling helpless, weak , addicted and just watching Her, The Poison Ivy!

Today I was shitting into the slavery mouth again. I was sitting on the chair and slave licking my big sexy butt. Lick it clean before I shit in your dirty throat. Now lie down on the flor and open your mouth wider. Do you like the taste of my shit? Do you realy like it? So much shit on your face, stupid slave. You should be my toilet, if you realy want serve me. Let's eat the lot of my shit.

After when my stupid slave gave me an old flowers for women's day, I smash all bouquet on his head. I was so angry!!! All my room was in pieces of flowers. I took vacuum and start to cleaning up. I crushed rest of that ugly gift with my feet. That was the worst flowers I have ever seen. 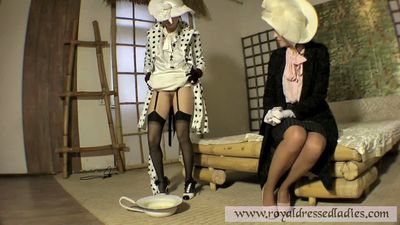 Come on little piggie, crawl next to me! Now you will get it extreme. Sweaty, smelly and wet, that's how my socks are after my training in sneakers, but that is exactly right for such a filthy pig like you, haha. I stuff them right in your face and push my sweaty feet under your nose. There smell will follow you the whole day!

We are waiting for the paypig. As he comes, he has to kneel down on the cold floor and gets his welcome-snot in the face! It's so ridiculous how he tries to lick our spit out of his face. It's hilarious, haha! Show us your wallet. What is that? On the credits we are missing one or two zeros at the end of the number! I'm shocked. He can keeps his shit. As a punishment he gets kicks and slaps in his face and more spit in his ugly visage and dirty boots to lick. I hope now he knows what is imporntant for us!

Tamara has been working all day long at the office so she now needs to rest her tired feet! She asked this loser slave to lay down on the floor and serve as a footstool for her last working hour! She just loves to use his face as a footstool, but especially after a long working day with her nylon feet inside her high heel shoes. She is actually really focus on her work so she doesnât really pay attention to him. She accidentally drops one of her shoe on the floor so the slave actually have one of her foot right on his nose! She also drops her other shoe on the floor, and totally covers his face with her sweaty nylon feet! She just takes pleasure to rub her sweaty nylon feet on his face, and also makes him stick his tongue out to refresh the bottom of her soles! It seems like she just loves to dip her nylon toes on his tongue. Tamara really needs to finish her work, so her slave will have to deal with her sweaty nylon feet on his face until she is totally done with her work!

Super awesome new premium video for you!) It has everything (pantypooping in sexy panty (lol), big creame tasty turd, nice angle, nice sound, smearing, sucking shit, liking shit, smearing shit on my panty, ass, farting masturbating) and even moreâ¦ this time I pooped a really big pile of shit, very gentle, very fragrant, mmm.. I can share with you my shit, smell, time)) One of my best videos, grab it.) As always excellent quality and low cost, specially for you)) If by this video typed more than 10 reviews, Iâll know what you like and will issue you a special PREMIUM videos for the SUPER LOW PRICE)) Write, leave your comments and suggestions, leave a review so I will be VERY pleased!) Once again thank you for watching me, I love you)

These converse aren't even old yet - but they're already so stinky! I put the beanbag on the slave, sit down on top of it and then make him lick the dirty soles of the converse for starters. Then I take the shoes off and put them on his nose. His disgusted whining won't help him - he has to smell the stinky shoes for a while! Then I shove my sweaty black socks on his nose as well - and after a full day in the stinky converse they've a pretty strong smell as well!

I'm wearing tasty nylons beneath my leather pants. In these pants they catch a very special scent, which you'll inhale now. Take a deep breath of my nylon air and enjoy - but only when I tell you to! Otherwise you're only allowed to watch or maybe kiss my hot nylonbutt.

79065 - Perverse-Piss-Excesses in the love swing! Part

Here I was put in a love swing and fixed! Then a tube, with a funnel, was introduced into my cunt! Then several guys pissed successively into the funnel and filled my pussy, with her piss. The hose was always pulled out of my cunt when it was full and the funnel overflowed. So that nothing of the piss was lost, they have with their finger the hose, held over my face and mouth and the piss from the funnel, run into my face as well as mouth! The men's piss in my pussy, ran out of my pussy hole. Here in the first part, the first guy filled me with piss!

You filthy little Panty Addict. You know you never gonna be close enough to jucy, sweet pussy or my tight, asshole. You are desperate to know how good i smell. Just taking one big sniff/whiff. Would make you so exited and the most happy, little boy on earth. Pretty funny how weak and desperate you get when im teasing you with them, when im holding them in front your face. Swinging from left to right its like hy.no for your. You cant stop staring at my pantys. You want it, you crave, you beg for it. You filthy little panty addict loves to hear when im talking all about my jucy pussy and smelly asshole while getting teasd with my sexy worn panty. So amusing.

Her boyfriend has his own definition of love yourself for this babe and this means liking every part of you, even your bodily waste! That is why when she shit on his bathroom, he scoops the up the foul mound and makes her smell and taste it! He then smears the watery poop all over her face and body, like a mud mask! Love your shit and you truly love yourself!

$$$A MEAN BRATS PRODUCTION girls Chanel and Chloe show Celine the perks of becoming a Mean Brat! Footboy lies on the floor at the mercy of their feet as they make him lick the soles of their shoes, use his head, face, throat as a footstool, and make him deep throat and gag on heels like a true fag! Each girl takes her turn using it's face as they see fit!If you think this is bad you should hear their clip ideas! They think deep throating him with a baseball bat would be hilarious! Chanel, Chloe and Celine are only getting things started! There's more clips to come in this crazy series that make poor Walter question his own sanity for shooting with all 3 girls in the first place!ONE OF THE HOTTEST SERIES IN THE MAKING! TWO GIRLS CHANEL AND CHLOE TRAIN NEW GIRL CELINE HOW TO DOMINATE, HUMILIATE, AND BREAK A BOY INTO SUBMISSION!(clip language: french)(clip time: 3:49) 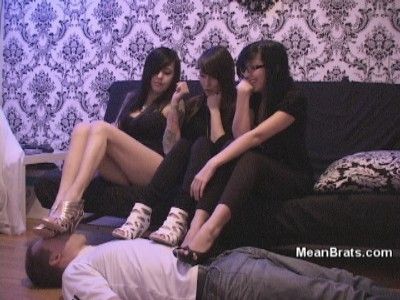 My loyal crush fan couldn't resist to send me 2 brand new laptops - and of course I'm going to take good care of them - with my sexy High Heels :-) Both are powered on and fully booted as I start to walk over them, but they start losing keys soon - and I take my time to slowly damage the displays - before they're taken apart completely. I don't think I ever crushed a laptop into pieces THIS small before :-D This is a non-exclusive custom clip for a fan. If you want me to do a custom clip for you contact me at marissa@madamemarissa.com!