Princess Natalie wraps her slave up tight so he cant escape. She duct tapes his ankles and knees and wraps his body up with plastic wrap. First she sits FULL WEIGHT on his face in her yoga pants after completing a workout. Her sweaty ass bounces on his face repetitively and you start seeing him squirm around. She later takes off her pants and continues smothering him in her sexy thong. Her fat ass plumped over his face, he starts kicking and panicking trying to escape the SMOTHERING, however Princess Natalie makes sure his face stays under her sexy ass. Enjoy!

POV abuse spitting! VIDEO IN GERMAN!Madame Carla insults you vulgarly and spits primitively in your face. She spits heartily at you in the middle of the camera!

It is served: soup with piss from the toilet! Lady Amber, the devil in angelic robes, has prepared another torment for her house slave. She cooks a soup on the stove and then ****** him to eat this soup mixed with her piss from the toilet. What a humiliation for the suckler who outwardly pretends to be gourmets!

Patient-Psycholgin RPG Foot Fetish Freak 2 ! GERMAN VERSION! Mr. Moser comes to a new therapist for the next therapy session. He still has the old problem with his fixation on the feet and shoes of women. Again he hopes the psychiatrist will help. But the new therapist is dressed just as sexy and provocatively as the last. Totally confused, the conservative, complex-laden Mr. Moser stutters his story of suffering again and cannot turn his block from the attractive blond psychologist's stockinged legs and feet. But this therapist also advises him to live out his fetish and not to suppress it. The inevitable comes again for Mr. Moser.

Mozart balls crush! Amber crushes a whole row of Mozart balls on the hot asphalt with her bare feet. We'll see the chocolate balls being mashed under her feet and the brown chocolate sauce sticking sticky to the soles of her feet before she stomps the next ball into the ground again.

Perverted nylon couple in fetish frenzy!This perverse nylon couple does it wrapped in nylons. She is completely in a nylon body and is initially pampered all over her nylon body by her strap-wearing lover. He kisses every part of her body, sucking himself up on the nylon. She teases his cock with her nylon foot and finally this perverted nylon team fucks each other to climax in their bizarre kinky orgasm.

ITALIAN SPEAKINGIt?s training day here at dungeon Roma, and I?m joined by my mistress friend. We have released our bitch from his cage and he?s going to receive some training. We are both wearing beautiful designer stiletto heels, and he?s going to endure the full impact of them on his body. As we trample him, his squeals for mercy are ignored, as we are having too much fun using our sharp stilettos training our bitch to heel?

ENGLISH LANGUAGEI was wondering if you could some aggressive rapid fire stomping in flats on someone's face? Like you sitting down in a chair and their head is under your shoes and you're just stomping the hell out of the side of their head. Also some head jumping and stomping standing up as well?

Honestly, I was only going to make my brand new Toilet Slave in training suffer the humiliation of having me shit into his hands while sitting on the toilet. .However, once I felt how disgustingly soupy , wet and chunky my shit was I knew instantly that this was a perfect time to coerce him into dipping his whole face into my mess and holding him there. .Fun fact : he had no clue that I was going to introduce him into toilet slavery that day. I was purposely instructing him in my language so that the barrier in communication would further confuse him and keep him on edge as he was already uncomfortable with it being our first bdsm session together. .So eager to please me , he finds out quite quickly he's in way over his head but goes along with it until the shocking ending. You see, I want to give toilet slaves a first time memory that haunts them forever and ever. I believe with every conviction that I terrorized him so much in this video that he won't soon forget his humiliation. Mistress Waeljaa4u.comhttps://twitter.com/FemDom_Bangkok

QS is wearing red panties and then she shits into them of course. She smears it around but since she is not satisfied with the quantity she gives herself an enema using the bathtub hose. She pushes the enema out into the panties then repeats it some more times. Finally she smears the shit from the panties on her pussylips, then wanks until she comes. 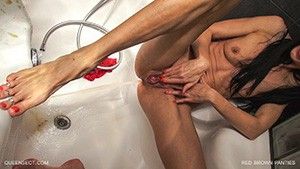 You're a paypig. It's that simple. Just like a pig, you're only here for what you can do for me. The only thing you're good for is your money. Love to spend money for me. COMPLETE MY AMAZON WISHLIST!!! That's all I care about. That's all you're here for. You're just a paypig. 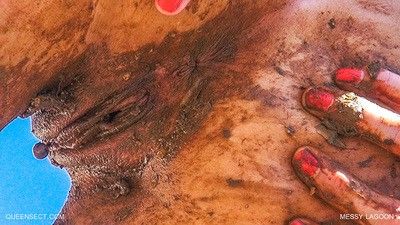 Mistress Roxana makes her slave mare suffer extremely! She sits on her back and then rides around on her for a few circuits. She gives her clear orders how exactly she has to move. The slave girl dutifully does everything her mistress asks of her, hoping to continue pleasing her. But Mistress Roxana only tests her slave mare for her riding ability and judges her by her appearance because she has something completely different in mind - maybe she can get a very good price on the market for this obedient slave mare?!

Some get baptized in the name of their lord, it's a one time thing. In the feminine realm of Zephianna, regular baptism is required for true devotion. Lay down your soul at my divine feet and receive my golden holy water all over your face, pitiful one. Now thank your female deity, and show further appreciation by licking any remainder off the soles of my shoes as well as the ground.Â