Fixate on the screen. Relax. Take in the view. My hands make you weak. Seeing them softly touch my body makes your mind tingle. No words are necessary, you just sink deeper the more you stare.

I have a wheelchair slave visiting, and he is hungry. As a polite host, I have no problem feeding him. So I tell him to hold out his hands, and push a really big load of shit in his hands. The slave start eating, but he gets thirsty, and he do not need to ask me twice! I get a glass and fill it with my really yellow piss, so am I the greatest host or what?He seem by the way to enjoy my cooking

6 girls! He swallows even the stinkiest diarrhea of a beautiful girl! Girls enjoy 100% - first the slave kisses their feet, then they brutally beat the slave in the face, and then he eats their feminine discharge! They enter the room in turn and the girls do not know what portions of the shit the slave swallowed before them ..

97136 - Spanking punishment for the slave

With the help of a chatting website, these two lesbians found their way to each other and on this night, they do more than just acquainting themselves! At first, they strip off their clothes and begin sucking one anotherÂs pair of tits! They then later follow it with spit swapping, but only for a brief period! Immediately, they move on to something more interesting which is taking turns eating pussy! When they reach the epitome of their urges, they position themselves in such a way that they are simultaneously orally pleasuring each other! Eventually, they make things dirtier by pissing on each otherÂs body and face! They would even repeatedly swap piss between their mouths! When they could no longer release anymore, they settle with intimately kissing until their urges are finally quenched!

Since you slaves ask me again and again about cock bondage or tieing up a slaveÂs cock, I made a short Â instruction clipÂ for you. Have a look and see how it works, or else, how I, your divine Mistress, want it to work. You then will precisely know what I am expecting from you and what IÂm talking of when it comes to tieing up your cock, slave! 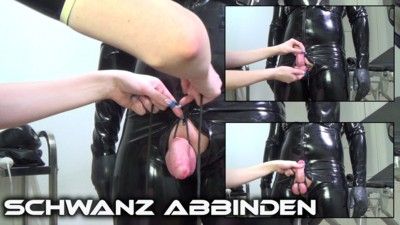 0132___ Who likes elastic and young ass? Do you like it? Look closer at this ass. She still beckons you. You want your face to feel it, do not you? Do you want to! So feel it. A young ass jumps on the face. She'll crush your face. Bertie loves her ass. She also likes to poke her dignity on the camera. Enjoy a delicate skin, a beautiful ass and a pleasant female presence close by

Back for more? Once a foot fan, always a foot fan. You'll do anything to watch My perfect peds, won't you? Admit it, you're addicted to My perfect size 7's

I know you stare and salivate over My sweet feet... Wondering just how many wrinkles My soles have, how My toes would feel wiggling in your face, how My feet smell after work... Indulge in your foot fetish. You know you want to...

Awww, is that chastity cage getting tight? This won't help. I know you can't resist my ass, so be prepared to get on your knees and worship. Oh, and don't worry, that cage is staying on during this extremely sexy tease. I don't want you having any accidents.

ITALIAN SPOKENHere is the right perspective, the point of view best suited to you and your stupid and meaningless life. Look at my ass while I shit in your face! Look at it from the position best suited to your nature of a toilet slave, shitty human latrine

I really love my Buffalo boots - they're so sexy and comfortable - but since they're pretty old, they need to be well taken care of! I order the boot slave to start by licking them clean completely. He has to lick all the leather parts, the heels and the dirty soles as well! After he cleaned the boots to my satisfaction he has to apply some shoe polish with a brush and then polish them with a cloth until they're shiny black again!

Two ladies had too much to drink in a sidewalk food stall so they need to pee! Being the small business that it is, they donÂt have a comfort room so the two are left with finding an alternative! What they do instead is go in the middle of a spare lot, take off their lower garments, and then relieve their selves! One is standing and peeing into the mouth of the other, who is gulping every last drop of it, while she is crouching and urinating directly on the ground! They then go back to the eatery as if nothing unusual just happened!

Hey babe! You seem stressed after work. How about we have a little fun to relieve that tension? I invited one of my guy friends over...I hope that's okay. I think it's going to be really hot if you get on your knees and suck his dick for me. Don't try to deny it, I know you've though about it, or at least fapped to it, based on your search history. Besides, you would do anything to please me. Your cock is hard at the thought of giving your first bj.

After smoking barefoot at the yard Miss Serena shows off her sexy filthy soles and tells you what is the job now for a good footslave. She calls one of her slave and orders him to lick off the dirt. She wants to see him washing and cleaning her dirty bare soles and toes and the dirt will be the dinner for him for today.

Start your servitude, would you? Haha, as if you can resist.My feet is what you crave for but can never get. Long toes with red nail polish, high arches and beautiful soles are about to dig so deep into your brain that from this moment you will not be able to think of anything else but them.You want to touch them so badly, just once! Not a chance. The only thing you can actually do is to pay for just watching this perfection on your screen. You will give me everything you're working for so I could buy expensive oils and lotions for my gorgeous feet. And oh what a pleasure will it bring you to become drained, I'm going to laugh so hard!These feet will crush you, no doubt.

At this point, I don't even know why we are still dating. I hate you and your dick so much that I'm completely uninterested in sex with you. So when you beg me for a hand job before we go out, I reluctantly give you one, but I definitely don't enjoy doing it.