Oh yes, you're a pay pig! You'll serve me and not think about it - you'll just do it! You'll buy this clip! Yes, it costs 100 Euro! But you want to pay it, you want to see this clip and you want to satisfy me! You want me to have 100 Euro more - and it turns you on to serve me! You'll get to see my hot ass and my sexy feet! And you know what? Once you paid these 100 Euro we both know you'll pay this sum more frequently - not only this once! You paid 100 Euro now - soon you'll pay another 100 Euro!

This is my blue catsuit.. doesn't it match perfectly with my blue buffalo clogs? I'm posing in this sexy outfit for... have a look at my tiny spandex feet.. they're so soft... Now decude : should I wear the buffalo clogs? Or do you crave for my spandex soles while I show off my butt? Just as a reminder - there's a zipper in the catsuit, you know for what :) 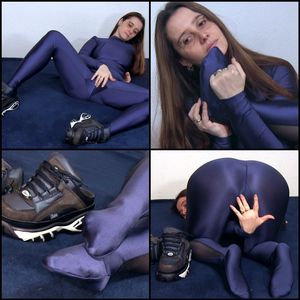 My Homegirl Sable is back with three great new clips!! Enjoy as she squats and spreads in the first scene. Then enjoy two runny scenes behind that. This 6 foot tall ebony stallion really unleashes some nice loads in each scene. Enjoy as she continues to pique my curiosity!!

It's weekend and time to go out, to drink, to party and just having fun. I'm all dressed up and while waiting for me tonight's date I did this clip - for all you losers who have to stay at home. Damn right bimbo - no clubbing for ya! You low-paid worker can't afford expensive drinks anyway and no bouncer would welcome you. Losers like you belong to the bureau and not in the club, cause ur mug troubles my eyes - nobody wanna see that. Of course you pay for my nights out; only the best drinks and the finest flakes for me - this is your job, bitch! 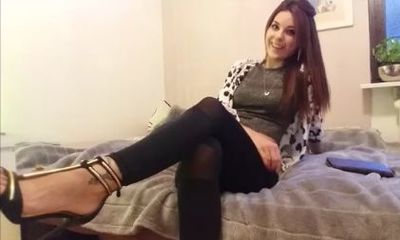 This clip is from the first sessions of Candy and Rosie together. Candy spent her day on a business meeting and came over to shoot a scene right after. It's very rare to see her in such an outfit, it's very unlike her normal style, however she looks very hot as a businesswoman, too, and the shortage of these kind of moments just enhance their thrill. We planned something different, she even brought a bag of clothes to change, but once she took off her shoes and the stink of her feet instantly filled the room, I was totally mesmerized by the scent, and insisted her to use those reeking pantyhose in the scene. Rosie hasn't got used to such a strong foot odor like that of Candy by that time, so I thought it was a great opportunity to shoot something really authentic. Rosie lied beneath Candy's chair and her abuse began! Candy shoved her shoes into her face and made her smell them, but that was just the warm-up, the hot, moist stink within those high heels was no match for the stink of her pantyhose. She rubbed her feet into Rosie's face, knowing that the smell will stick to her face hours after the smothering ended! Rosie tried to fight off Candy's feet, but she yelled at her to keep her hands behind her back. Rosie is just too easy dominate, even though see was disgusted by the stench, she kept filling her lungs with it. Candy was constantly laughing at her and intensifying her humiliation by abasing words. She took pictures of her with her phone, and even threated her, that she will send the pics if she fail to inhale in utmost submission!

Part 1.Mrs. Berty relaxes with her slave. She came from school, roughly pushes the slave to fall on back and immediately jumped on his chest and sat down so that her "boyfriend" could not run away. She began to spit on his face, smoke, drop ash. She laughed at this wanker. To be continued â¦

I pin down the slave in the living room and sit down on his chest. With my knees on his arms he can't get away from me now and is totally under my control! I light up a cigarette and use his mouth as my ashtray - and spit into it as well. He has to swallow all of the ash and spit - and afterwards I take off my nasty dirty socks and stuff them into his mouth. After finishing him up with some faceslaps I leave him alone - for now ;-)

I'm going out tonight and my high heels need to be cleaned perfectly. While I finish my make up in front of the mirror the slave has to sit next to the toilet and clean my high heels with his tongue. But he isn't doing it good enough! I grab the shoe from his hands and put the shoe sole into the water in the toilet - now he can lick it off my shoe soles! But that brings another idea to my mind - and I rub the sole of my other shoe on the toilet seat - which he has to lick as well of course. For the final humiliation I make him lick the top and bottom of the toilet seat before I push his head into the toilet and flush it!

We stopped at the parking lot in the forest and decided to grant my feet some fresh air... they crawl up the window pane and escape through the canopy :) You like my tiny soles, don't you ? They dance in the fresh air and you may catch a loooong glimpse if you like :) 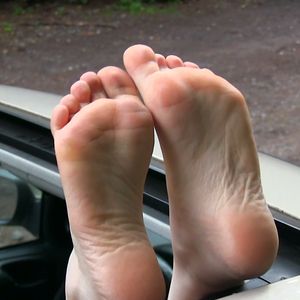 The slave is on his knees and serve Lady Missy. Then she starts to trample him with her pumps use him afterwards as a human ashtray and a spitton. Also she tests him out how he reacts to hot candle wax. Lady Missy enjoy it when the slave moans in pain.

Check out this amazing collection of my BIGGEST loads of shit EVER! These turds are so massive! I love how amazing it feels when I push out these monster loads of shit! Look how my shithole opens up and all this poop comes sliding out of my smelly ass! These are some huge turds! Look at how big and sexy they are! I hope you love big loads of shit! Because these turds are HUGE!Enjoy!

Silvana is another hot girl who heard about our sweaty socks challenge by one of her friends, and it seems like she really wanted to give it a try! She just couldnât believe at first that someone would be able to deal with her sweaty socks in his face for two hours after she had worn the same pair of socks for a full week! She decided to go for the two hours challenge, because it is almost impossible for the slave to win the challenge, and she wanted a nice foot massage while watching her favorite TV show! So here is the deal now. Our slave will have to deal with her sweaty socks and feet in his face for the next two hours without complaining. If he canât do it? Because her socks and her feet are too sweaty and smelly? She makes a two hundred dollars bonus in cash! Thatâs why she made sure her socks would be sweaty and ready for this challenge!Silvana is explaining the rules to her slave, and she wants to make sure there is no cheating. So her slave will have to deal with her sweaty socks and feet in his face for the next two hours. She gives him the call to take her sneakers off, with a sexy and cruel smile of satisfaction, and just covers his face with her sweaty white socks! I mean, they were all white seven days ago, but the bottom of her socks is not so white for now. The smell was incredibly strong, but she was really determinated to win this challenge, so she just makes fun at him and rubs her sweaty socks all over his face. She makes him lick the dirty bottom of her socks, and makes him take some deep breaths inside her filthy sneakers! After a while, she gives him the order to take her socks off with his teeth. She just pushes both of her socks inside his mouth, and covers his face again with her sweaty naked feet! She makes him lick the sweaty bottom of her soles, and also clean all he dirt in between each of her toes with his tongue. The complete version of this clip is only fifty minutes, so we can say that it was an easy win for Silvana! Again, you will instantly fall in love with this girl. She is hot as heel, and really dominant for her first foot fetish experience! Hot Clip Alert!

Just what you want, little ass slave, isn't it? My ass is so big compared to your little loser body. You crave nothing more than getting squished under my butt, do you? And that's just what you get! It's going to be pretty intense as I open the long zipper on my pants - you'll now get to breathe my ass odor and you won't get away from it! My ass owns you!

Happy Halloween, little slave! As you also should have a nice day, I have an awesome and kinky jerk off task for you. Be ready to walk around town for me on Halloween. So listen carefully to my orders, little slave! 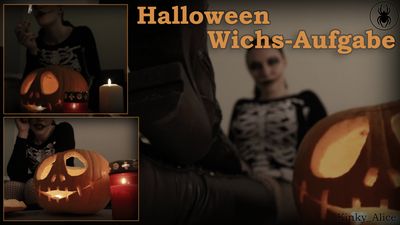 Enough is enough, Rosie is just fed up with being enslaved and humiliated all the time. At least a dozen times she had to suffer Candy's stinky, sweaty feet in her face, now it's her time to avenge the abuse! She tricked her into bondage, all Candy's limbs and neck are tied by leather straps and chains to the pentagram on the floor, leaving her more defenseless than she has ever been! This could have been more than perfect to begin her torment, but Rosie had even better plans! She simply left Candy in the empty room, tied to the floor with no idea where she has gone, and when she'll come back. Rosie ran for like half an hour around the block, sockless in her stinkiest old VANS, in the deadliest of summer heat! She arrived back totally socked in her sweat, red face and veins throbbing on her neck. She took off the shoes and instantly made Candy smell the stink of her feet. She rubbed the salty sweat into her face and laughed at her. Candy tried to maintain her dignity, but vainly, her humiliation went on record! She had no chance but to inhale the reeking stench of Rosie's soles. But she hasn't been tied up for a few sniffs, she had to put her tongue into work, too! Rosie made her lick all the salty sweat off her soles, and according to Candy, they had a terrible taste!