77211 - The queen ordered slaves against his high-heeled sandals ejaculation 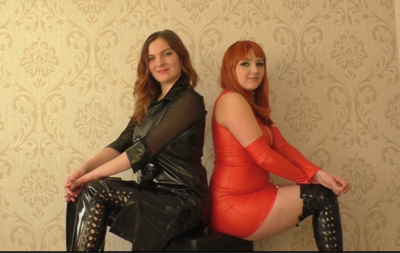 Mistress Clarissa delights in punishing and trampling her slave in the dungeon. Wearing knee length leather boots, PVC dress, and stockings it's quite a sight to watch her crushing and pushes the air out of him. Revealing in dominating and humiliating him further she spits in his mouth and instructs him to remove the boots so that she can rub her feet on his face making him smell and take her toes into his mouth until he gags. It's evident that this mistress certainly enjoys her work laughing threatening and teasing her Slave as she plays with him. Filmed from 2 different angles with another camera.

The sleazeball did not deserve anything but shit. Two happy Mistresses tied up the slave and trained him properly. His next punishment: to get more shit, humiliation. Girls smear their âdeliciousâ shit over the slave's face, spit thereon and laugh. The slave tolerates these humiliations, because he has nowhere to go, he is bound, immobilized and he will not dare to do anything against their will. The girls sit on his face, strangling with their booties and enjoy it very much.

Most of you might know that I am love to slap my slaves face as hard as possible. My slaves have to take kicks into their stupid faces and These idiots are even grateful for this.This is one of my new slaves and I really love humiliating this guy. Watch me slapping his face and kick into his face with my hot sneakers.1080p

I'm a dirty girl! I love letting you watch me when I go poop! It turns me on and makes me feel so good knowing someone is watching me when I poo! I want you to see my face scrunch up! I want you to hear me moaning and groaning! I want you to see the look of pleasure that crosses my face when I wipe my dirty asshole!Watch me push out a huge smelly load on my toilet. I talk dirty to you and tell you what I'm feeling and smelling. Then watch as I wipe my filthy asshole. I love to smell my toilet paper and stuff the dirty wad into my mouth! I know, I'm a filthy girl! I can't help it! I get so turned on knowing you are watching me be a filthy girl in my bathroom!Do you want to see? Do you want to see that big wet load of my poop!? Watch my turd go down the toilet as I flush! Bye bye poop!Enjoy!

I've bound the slave on the couch to keep him in place - as I already knew he'd move to much with the pain I'm going to cause him know! I slam my sharp teeth into his skin and cover his fingers, hands and arms with bite marks. I just love the feeling of my teeth going into the soft skin - and hearing his pain screams a split-second later! I even pull up the skin from his hands and fingers with my hands then bite only the skin. In the end he's totally exhausted and in quite a lot of pain!

This has been a crazy year for me lots of ups and downs and many of you know I am moving in the next two weeks so I am going through all of my clothes. It's no secret I have gained a few pounds over this last year and new workout and diet plan start today. However now my jeans are a little tight watch me try on 5 different pairs lets see what fits.

Welcome to MGH! An all girl High School filled with only the meanest girls! This is the story of a boy who was turned into a human carpet and placed in the girls washroom to be stood on, bullied, and humiliated by the entire school! Sandra stands on the boy at MGH admiring herself in the mirror. Sandra boasts about how good looking she is before taking a few selfies of herself in front of the mirror while standing on the school's public human doormat. Things will only get worse from here on out for the poor boy on the floor. Sandra will verbally degrade him, humiliate him both physically and verbally, and even takes it a step further by making him deep throat her heels and lick the soles of her shoes clean. ***Please Note: Certain scenes advertised might be from 'Sandras Edition' exclusively. Not from this version of the clip. MeanGirlHigh.com (clip time: 12:00)

Now you'll get to know a few pairs of boots - from a trampled slave's perspective! I'm walking all over your face, stomp down on it and even jump on it in a few pairs of my favorite trampling boots. Starting off with the CAT boots that have chunky low heels until we reach the over-knee boots with thin high heels. Do you think you'd be able to endure that in real life?!

Jenna is in charge at the office today and she is actually looking for new employees for the business! You had to wait for over an hour to get your interview with the boss but it is now your turn to sell yourself if you want to get this job! Her feet are actually on top of the office, and it seems like it really distract you. She had a very long day at the office, so you can almost smell her nylon feet through her leather shoes when she is dangling her shoes! She actually noticed that your eyes are fixing her feet so she is now in a position to take advantage of you since you have a foot fetish! Jenna makes you bow down on your knees and slowly takes her shoes off to completely cover your face with her sweaty nylon feet! She wants you to smell them and take some deep breaths in her feet! She also wants you to stick your tongue out to lick the sweaty bottom of her soles! This is what she is expecting from you to do every day if you really want to get this job, so make sure you are doing it right!

Jana H, a sweet russian girl s relaxing on her seat and has a guy to her feet licking and worshipping her dirty feet and filthy soles. Lick it slave.. thats your destiny.

Mistress knows how to train her slave. Today her domestic slave is ready and prepared for whatever she has in store for him. She first made him taste her fresh pussy fluid, followed by some dried vaginal discharge on her panties then gets him to lick her unwashed pussy. Then make him open his mouth wide for some slimy spit. She then teach him how to brush his teeth using her vaginal discharge by sticking her toothbrush inside her pussy and then brushing his teeth with it. Washing it off with her spit into his mouth!

Camille and Maika are the kind of brat girls who love to party and they also like to abuse loser slave at their feet! That?s why your task is now to bow down on your knees in front of their feet and listen to their instructions! That was a very long day with their shoes on so they want you to take them off and enjoy the smell of their sweaty white socks! They are ultra sweaty and smelly but they want you to compare the smell and tell them which ones smell worst! Camille and Maika want you to take some deep breaths in their socks and stick your tongue out to lick the dirty bottom! They also take their socks off to rub their smelly bare feet all over your face! Don?t you like that? Four sweaty feet in your face? Are you getting hard? Don?t you wish they would let you cum on those sexy feet? Camille and Maika also want you to stick your tongue out to lick and taste the sweaty bottom of their soles! There is just nothing more refreshing after a long day with their shoes on!