Once again we - Lady Stefanie, Mistress Jenny, Miss Catdeluxe and I - grant you a little look behind the scenes. The clip contains orgasm ruining outtakes as well as excerpts of all titles listed below.

Today the cold front "Reell" rushes through the slave's hideouts again making a big bang. A merciless hailstorm rages through the victim's attic with a hellish noise and leaves a damage that is probably not covered by any insurance. Every now and then the storms seems to clear up with a few occasional showers but they don't last long. The storm situation continues to be tense. Experts warn that losers should stay at home and keep safe.

I had not gone to the bathroom since my huge load, A Plateful Of Shit, Saturday. Today is Tuesday and after the BBQ I had yesterday, this one could not wait to exit and it is huge!!!

LET'S PLAY DORK FACE!Ready to play a dr1nk1ng game with Kate? You will need the following:1) A mug of B33R + refills2) This clip3) A PenisKate will explain the rules in the clip, but basically it's a game of poker. If she wins, you CHUG A B33R! If you win, she drinks! She will deal the cards out on camera. So sit back, watch/listen, and enjoy the show!KATE'S EDITION INCLUDES BOTH THE ORIGINAL AND THE COMPLETE UNCUT, UNEDITED, RAW FOOTAGE! INCLUDES ALL BLOOPERS, RETAKES, AND OUTTAKES! 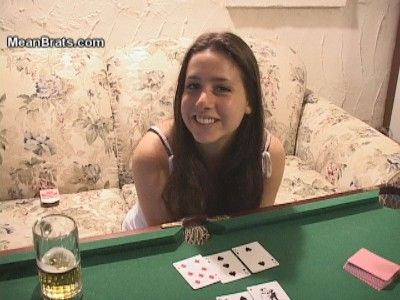 Actually this table was only supposed to be carried down quickly to the bulky trash, but at the front door I just had to stop spontaneously to unite table and slave one last time.

I lie on my stomach and my feet stick out of the bed. A chance for you to admire my naked soles and toes from afar while I ignore you again.

Yet another night with nothing but countless drinks spend and false phone numbers as thanks, but on the way home through the deserted park you see your last chance: A girl - very young and damn hot. There seems to be something unusual about her, but your perma-boner already gave up registering any warning signs a long time ago. You talk to her and... she says YES! Your pants are about to burst. She whispers things in your ear - something about a girlfriend... - and then the situation escalates and your only thought is 'Run for your life!', but Harley's trap is already set...

You just can't keep your mouth shut, can you? Do you ever stop yapping? It occurs to me you've always got far too much to say for yourself. And now I told my husband all about the constant wagging of your jaw, he's less than pleased. In fact, he's decided that he and a few of his friends are going to teach you a lesson in ensuring you keep your filthy mouth shut!

It feels good doing this for you Goddess for I am not worthy of your ass smell was the words my slave respectfully said while smelling my ass crack. So with a grin on my face I repliedI like having my ass lickedDespite the stinky ass smell he didnÂt hesitate, he started eating my ass right away without complaints.Watch my facial expression as I squirm and loudly moan and whimper in extremely intense pleasure while my slave works his tongue deep up my smelly and unwashed asshole. Knowing he is smelling and tasting my natural anal odours and flavours back there only makes my climax that more intense.IÂm one of the rare and few women whom are so kinky I orgasm from having a tongue up my smelly and sweaty dirty ass. Even when I told him that I love it when he goes deep into my ass with his tongue he THANKS me because my asshole taste gets stronger the deeper he licks. Now THAT is a sign of respect towards your female Goddess!Be sure to check out all my other intense and kinky clips! xoxo 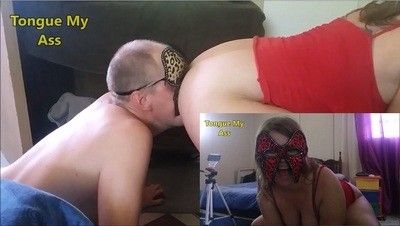 For the quick visual KV pleasure, I have come up with the Lady Luci KV series to go. There are short, spontaneous KV clips for in between. Here is another production in a luxury hotel.

The doormat is a simple yet practical product. It serves as a dirt trap and in most cases is located close to the entrance door. An individual design can be created by mercilessly rubbing the boots over it. Small extras, such as two nipples, even ensure precise dirt removal in the profile. The object does not require any attention - once the mat has worn off, it can simply be replaced.

Isolation - what does this word mean to you? If we're both honest, it's just the definition for your everyday life, isn't it? But the days of Corona and the home office hide very different consequences for you... You've been familiar with loneliness since birth, but now you've been deprived of any outside distractions aswell. You are locked up - together with your PC. Thoughts start to circle and your stubborn dick speaks to you more and more often. One clip order after the other lands in my mailbox... When is it too late? Symptoms: permanent sexual appetite, excessive masturbation, heavy consumption of my clips, psychological withdrawal symptoms in case of sexual abstinence.

Today it is time to make a real sissy out of this slave. The boots he brought along don't look very lady-like because there is a lot of dirt on them, so first of all Bratty Jenny-Nina makes the slave lick them really clean before his sissy training can start. Then she puts red lipstick on him and lets him put the boots on. Now he can walk up and down and we'll see if he can move like a real sissy. Bratty Jenny-Nina wants to see elegance from him so he has to work hard...

14398 - Trampling you in the forest parking lot

Good afternoon, my dear fans. I am on vacation on lake Baikal and as I promised I will introduce You to my adventures along the way. I went by train for three days, it was boring and I really wanted to play pranks. So at one of the long stops, the slave girl and I went for walk. There was a Park near the station and I wanted to pee. The dirty thoughts popped into my head and I lifted my skirt, turned my back to the slave girl and piss standing up. Powerful jet hit the ground, and I almost peed all over my jeans, but what satisfaction this little prank was. In one of the hotels on the way I was bored in the evening and I decided to take a shit with my feet up on the chair. This You will see. At the same time, I had to be very quiet, because walls were very thin, almost cardboard. I took a good shit and went to bed with sense of accomplishment. I got diarrhoea at the hotel and took a shit in the bathtub. I was standing up to my ankles in shitty water and the smell of shit filled the air, it was like this wonderful

A gorgeously young 18 year old girl comes knocking at the door! She asks if he's "the guy" known as Walter! You see this girl is looking for a soul mate. But he's not the guy she's interested in being with! On the forum, rumors have spread that if a girl gets her butt kissed and sits on the face of a guy known as Walter, it will bring her great fortune to find that perfect soulmate!An ex girlfriend of his is the one who started the rumor. She posted his address on the forum for all girls to see! And now one by one they come knocking at his door, to have their bums kissed in order to bring them the luck they need to find that special someone! In a sense, poor Walter is being used as a tool or stepping stone in order for the girls to find that perfect man! With a forum of over 16,000 members, he'll have a lot of butts to kiss with no hope himself of ever being in a serious relationship again! Afterall, who's going to take a butt kisser seriously?Once she lets herself into his appartment she closes and locks the door behind her! This girl won't take no for an answer! He's going to have to kiss her butt whether he likes it or not! Girls will be sitting on his face and getting him to kiss their butts, only to leave and never be seen again!A VERY RARE COLLECTORS EDITION CLIP FROM WHEN KATE WAS JUST 18 YEARS OLD! STORED OVER THE YEARS IN OUR ARCHIVES, NEVER RELEASED UNTIL NOW! KATE WILL FOREVER BE THE SYMBOL OF MASOROTICA'S STRENGTH!

February. It's cold outside and Lady Stefanie, Miss Catdeluxe and I are in a super cuddly mood. This is your time, because these fluffy wool dreams made of expensive mohair make your brain go soft again. The fine wool caresses our skin with every mutual touch and really makes your imagination sweat - the close-ups will give you the rest...