53010 - Giant shit pile had to figure out immediatrly

Had something ofmuch shit,could only still pants down and kneel!! Since the soft sausage after that thin shit a crass dose came already,that shit.....want you fuck my smeary rosette? 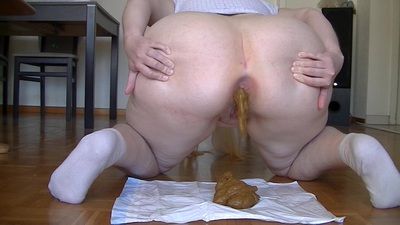 You know how dumb your cock makes you, right? You always say stupid stuff to women, you only think about your own pleasure, you're such a jerk-off addict that you can't stop thinking about pleasing your own little dick. And it's not like you have some amazing cock, right? It's not like you're a huge BBC stud who could even get a woman like me to talk to you, none the less fuck you. Well listen up fucker, I know you don't really care about SERVING a woman because if you did you'd lock your dick in chastity, but you probably won't since I know you're jerking it right now. You're so weak when you look at my amazing body, just admit how pathetic your cock is. 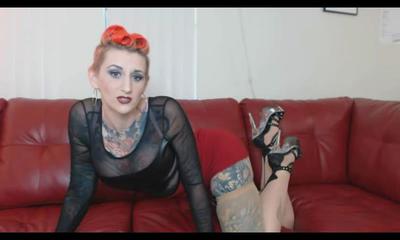 How badly do you wana kiss my shiny lips?How much you will pay to kiss my lip sonce? Only 1 heaven kiss! How much is too much? How much is enought?So many questions and only 1 kiss.Well its not a simple kiss is THE KISS..the most WANTED kiss! 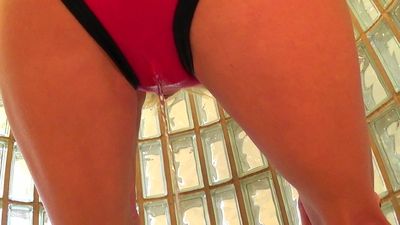 You would love to serve me live and real but you live in England and Germany is so far away? No more excuses! I'm travelling to London in September! Listen carefully, my sweet little p(l)ay thing and get to know how and when you can spoil me, give me all your hard earned money and get milked and drained by me.You can see this clip for free on YouTube but real pay slaves watch it here and pay for it! ;)

In the past two weeks well lets just say my slaves have been very good here is just a preview of some of the new shoes I have gotten. None of these are heels those are all saved for different video. I try on 5 different shoes and watch how fast and how hard your dick gets!

Katelyn has just returned from walking a few miles around her development and the surrounding area in a pair of sandals- she's quite thirsty and her feet feel sore. She first goes to the fridge in search of hydration, hollering to her roommate (Robert) that she's home but not hearing a response. He must be out, too bad as she was looking to do some gaming and chilling. Since he's not there, she lets out some loud belches while downing the rest of a Rockstar energy drink and some Gatorade.He usually pokes fun when she belches since they kinda sound guyish- deep and loud but sometimes bubbly and girly too! Still sipping at the rest of the Gatorade she heads over to the couch to rest her sore soles and plan out the rest of her day. Ahhh, it instantly feels so good to prop her feet up on the glass table. She leaves her sandals on for another moment and then slips them off.Mmmm! Now she beings to think about how Robert doesn't like smelly feet. And boy oh boy, she can really smell them! Oh... how fun it would be to shrink Robert down, trap him in between her toes, and burp loudly. It'd not only be fun, but playfully torturous for him too! She'd get so much playfully sadistic pleasure out of doing such things to him. She jokes around with the idea aloud, burping some more and pushing her big toe into the spaces between her toes on the other foot, talking about how she'd want to feel his body right there. =)Letting her mind go back to planning out her day, she actually feels a little tired from the walk, so she thinks she'll get a shower, some food, and take a nap to rejuvenate for the rest of the night!This video features lots of burping, foot fetish, closeups of Katelyn's toes, and a talking about her roommate theme. Little does she know he actually does have a burping fetish and foot fetish which is why he talks about her burps and smelly feet so much!

53011 - Small Penis Therapy 3: SPH Verbal Abuse Therapy to accept that you're only good as a jerkoff slave

You know you need therapy. Having a tiny cock and being constantly sexually rejected by women has made your sexual responses all fucked up. This sex therapy style video will teach you to accept your fate as a micropenis loser, genetically destined to serve women. You are programmed and destined to serve as a jerkoff slave. This will solve all your problems, you won't have to worry about failing with women any more!

Request fulfilled! I was asked to produce another pedal pumping clip after my last successful one, wearing flat boots. I go hard on this little car, pressing the gas and clutch deep into the floor.

Watch me smoke an extra long clove cigarette that is red to match my lipstick. I enjoy a gorgeous smoke in my super hot outfit while I blow smoke in your face, humiliate you, and make you beg to be my ashtray.

Another train was sent to me by a fan - this time with rails and everything one needs to run it. I let the train drive for a short time - then stop it brutally with my high heel. The locomotive is crushed immediately and all the wagons jump out of the rails. I first finish the locomotive, then proceed by crushing the wagons, the tracks and in the end even the box everything came in :-)

Lolly Moon comes after work and she is very tired. She ask Alex to kiss and lick her stinky feet. Her feet was sweaty and salty to taste. Then slave lick another feet. He also lick her dusty work shoes and it's dirty soles.

For many fans of the genre here is a compilation that contains six of my best clips at a special price. If you are suffering from diarrhea, you can not let it go! It includes the following clip: *Shit From The Cave*, *Diarrhea in The Bathtub*, *Diarrhea For Losers*, *Diarrhea Explosion*, *Human Toilet Paper*, *A Tremendous Amount Of Shit*.

Sexy Michelle K. loves to smothers a guy with her big hands . long sexy legs and with sitting on his throat... she s great .. fantastic breath controlling

He woke me up at night abdominal pain. I ate too much for dinner. Belly hurts, I can not make a heap and pee. I'm trying to squat and do shit, standing does not want to get out of ass. I do so shit into the shower. Finally, there is a beautiful golden shit !!!

"So we're teaching Julia how to smother $hitface!" Kate announces while holding the camera introducing everyone to her new friend Julia! "So just sit on his head!" Kate tells her friend as her friend stands there giggling. "Like just sit on it. With your full weight" Kate instructs her telling her to begin in the reverse position so $hitface is directly under her bum! She tells her friend to get comfortable and put her legs down so she sits on his face with her fullweight!Kate moves to the front facing her friend. "How do you like it?" Kate asks Julia. Kate walks behind Julia making sure $hitface can't breathe! "I don't think he can breathe!" Julia tells Kate laughing at the thought of him smothering under her ass. Kate begins to giggle, "He's turning all red!". Both girls begin laughing as Kate pulls her friend by the back of the jeans making sure he's completely covered with no room to breathe!Kate then comes up with an evil thought..."I'm going to try and come up with a burp so I can burp on his face!" she says as her friend Julia laughs and encourages her to do it! Kate begins drinking soda as her friend continues to sit on his face! Kate then moves in with the camera and BURPS right in his face! Kate continues BURPING and blowing her BURPS right under Julia's ass! Both girls laugh uncontrolably!He manages to squirm away coughing but Julia quickly grabs his head and positions his face back under her ass! Kate continues with her BURP assaults! "Check out that fine butt!" Kate says capturing all the action! "Shake it!" she tells Julia! Julia shakes and wiggles her butt from side to side over his face!Kate then sits down and puts her sweaty socks under her friend's butt against his face! Now his face is covered under Kate's sweaty socks and Julia's butt at the same time! The girls continue filming and smothering him until they literally run out of tape!(CAMERA GIRL: KATE)This time Kate places the camera on a tripod so both girls can sit on $hitface! "Can you move back a bit. We can both smother him at the same time!" Kate suggests to her friend Julia. Both girls position themselves so that both their bottoms are on his face at the same time! "How do you like it?" Kate asks as both girls giggle! They crush his face under their combined weight! "Is both butts on your face Walter?" Kate asks."This would be a perfect time to FART in your face!" Kate threatens! Both girls laugh at the thought and Julia encourages Kate to do it! These girls will think of anything!They switch positions BOUNCING and DANCING on his face while sitting! "Got any burps left over?" Julia asks Kate. Kate goes to get an energy drink while her friend continues smothering him. She drinks up and gets her burps ready for him! She starts burping in his face from between her legs as he lies trapped under Julia's ass! 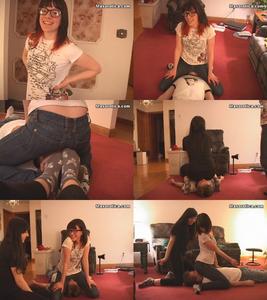 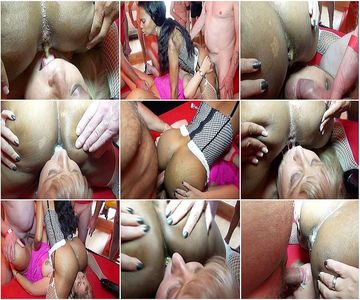 Angel is not an ordinary girl. She looks like professional mistress with sadistic nature and without feelings for her victeems, especialy guys. In her eyes you can see the evil. Natural born evil. And she enjoy in domination, she destroys any kind of human in your mind. That's why we love her... She tramples his croutch and upper body.