I know these sluts adore me.. especially marina. She loves me and is ready to worship me completely. She prays and compliments me. I like to watch her humiliate herself in front of me. She is ready to do anything for me .. She kisses my hands, ass, armpits, shoes and becomes my human ashtray. Good slave!..Aurora..

My Ass, your face i call that DATENIGHT!Ohh you thought, we would go out? You could take me to a nice restaurant and we have dinner together?Come on, you canÂ´t be that stupid can you?You and ME? Together in puplic, haha dream on bitch boy.I will put your face to good use, you are only here so i can rest my perfect ass on your Loserface!This isnt a real date.... Pathatic that you would think that!Lay down and enjoy the view, bitch!Nothing is more important than to worship my ass!

Alsu wants to show all friends and acquaintances of malvina that she is her slave. She orders her slave to worship her feet and films her. "Now I will send these videos and photos to all those who know you .. Let them see that you are just a pathetic loser who worships my feet" - Alsu scoffed while malvina licked her feet. Alsu threw her sweaty socks on the floor and malvina brought them as a devoted pet .. of course Alsu filmed all this on camera .. malvina begged Alsu not to show these videos and photos to her friends .. but of course the decision will be made by Alsu to show these videos or not!

Goddess Sheila: Crawl to me and kiss my feet!I'll show you how to greet me now. You will crawl to me and kiss my feet. Even on your knees you're not submissive enough. Your stomach belongs on the floor. The way you are lying in front of me, you kiss my high heels first. Give me such a sign of my divinity and superiority. Then you take off my shoes and lick and kiss my bare feet. If you worship the tops of my feet, I might even let you kiss my adorable soles. While I whip you you will cover my feet with kisses! After worshiping my person with foot kisses you will withdraw and wait for my orders. This is how the greeting of a goddess goes. 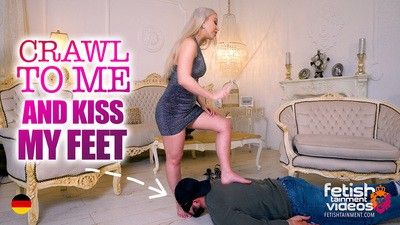 Miss Katherine Kendal has some nice humiliation in mind for the slave today. Dressed in her black leather pencil skirt, black stilettos and very beautiful green satin shirt she will be crushing some grapes on floor and the slave must lick the soles clean afterwards.The first 5 minutes you can enjoy really nice grapes crushing while Miss Kendal talks straight to the camera. Actually this is the slave behind the camera who is going to lick the soles of the Mistress and the floor of course. You can see that the floor is completely messy after the crushing, but Miss Kendal doesn't really care about that. The slave has to lick very obediently the bottom of her leather shoes which are covered in grapes. The Mistress also add some more grapes on her soles by crushing them again and again while the slave is licking them every time. She constantly does that. The slave's mask is also covered in grapes. Some shoes sucking is also taking place.Miss Katherine Kendal is really merciless. She demands her shoes to be spotless, but the slave obviously couldn't do that.There is a slow motion moment added for some of the grapes crushing (there is no heels crushing btw). Some nice camera angles and close ups.

In this new masterpiece of bdsm arts, Lady Iveta is wearing her new black boots, which are ready for her next treatment. And you can be sure, that she will use them as a ******, when it comes to the day.But first of all she needs them prepared for her next sessions, which will be filled with pain and suffering. And what will help more, then strong black boots, which are covered in slaves salty sweat and saliva. So she chose her bravest and most faithful servant for a session full of abjection only for her amusement and her pleasure. Dressed in her finest shiny rubber couture she lets him kneel and lick and suck every single inch, from top to the tip.

I know these sluts adore me.. especially marina. She loves me and is ready to worship me completely. She prays and compliments me. I like to watch her humiliate herself in front of me. She is ready to do anything for me .. She kisses my hands, ass, armpits, shoes and becomes my human ashtray. Good slave!..Aurora..

Here is the seventh compilation of our most incredible and dangerous high heel facestanding and headstanding actions FULL WEIGHT. 31 minutes of pure agony !

Requested by many of you, this amazing compilation collects the best scenes in which our beautiful girls use Cucciolo and other girls as useless human objects. They use him as a footstool, as a mat, as a chair, as a stool, as a ladder, as a coffee table, as a sofa, as a doormat, as a step and more.Using a man or a woman simply like a human furniture and ignoring them is one of the highest form of female superiority. You'll love this video !

Princess Serena shows the sock sniffer how much her feet stink. She makes him take off her shoes and smell her sweaty stinky socks. While doing this, she beats and spanks him to make him really get into it. She wants to have a good snock-sniffing pet, not one who only pretends to be one! For that, every beating is worth it!

The title says it all. In this unbelievable compilation the best scenes in which our gorgeous girls humiliate Cucciolo in any possible way with their shoes. They take their shoes off and they him to worship, to smell, to kiss, to lick them, they use them as ******s and even to drink inside those shoes. This video is a real pearl for the shoe lovers !

Kat, my dirty Kat, is covered in shit. Smiling, enjoying her perversity. She likes to be dirty pervert. And I like and want fuck her in mouth, in the very throat, and let her vomit

Alsu wants to show all friends and acquaintances of malvina that she is her slave. She orders her slave to worship her feet and films her. "Now I will send these videos and photos to all those who know you .. Let them see that you are just a pathetic loser who worships my feet" - Alsu scoffed while malvina licked her feet. Alsu threw her sweaty socks on the floor and malvina brought them as a devoted pet .. of course Alsu filmed all this on camera .. malvina begged Alsu not to show these videos and photos to her friends .. but of course the decision will be made by Alsu to show these videos or not!

Look at these sexy leather boots...just one glance and your cock is instantly rock hard. I bet you want to jerk it, don't you? You want to jerk it to My boots! Every inch of My body is way too hot for you to resist under normal circumstances but this outfit just sends you over the edge. I want you to watch while I tease you and to stroke that dick when I tell you. Are you ready for My boots to get you off?

This lousy slave showed up late once again and it will be up to me, Gea and Cleo to punish him and make him understand that delays are not tolerable. We immediately kick him in the balls with our boots to set the record straight, but that's just the beginning. I want him naked, I want to see his balls being crushed by our blows. He undresses and we slaughter him with kicks but after a while we want to hit him with our bare feet and so now he also has the privilege of taking off our boots. He throws himself at our feet to take off our shoes and we decide that it is better for him to stay on his knees and we start kicking his balls from behind and from different angles as we walk around him. Finally we put him on all fours and complete the punishment with both front and back kicks while one of us in turn rides him to keep him at bay: he collapses to the ground destroyed and promises never to be late again.

In Prigigape's production, the word EX means extreme. It was put on those videos for that the intensity of the action and the feeling between the performers; somehow appeared different from the other videos in the Heels & Whips series;and this Volume EX 1 can be, without doubt, the flag of them. The action starts immediately and will never stop until the end, not even a second. During these 33 minutes, the Mistress literally tries to destroy this incredible slave. She tramples his whole body, back and forth, pressing the high heels of her shoes deeply into his flesh. But she won't just step on him. In fact, she holds a whip in her hand; impatient to make it known, to the body of her slave. And when she starts using it, a deluge of blows hits every inch of the slave's skin. Really, she doesn't look human, but a mechanical whip. The Mistress hits him when he is lying on the ground; when he is on his knees in front of her; when he is leaning against the wall, leaving his back exposed, ready for the next blow. And she never stops whipping him, even when she crushes his body under her high heels; punishing him severely, in two different ways. Heels and Whip. The sound of classical music resounds in the room incessantly; just like the action that takes place there giving rise to an unusual challenge: the music or the sound of the whip, will be louder?