For months my slave has been begging me to allow him to serve as my toilet... Fine, if that's what he wants! This is my 4th full-toilet training session with my slave. Last time when I fed him my shit on a plate of microwave ravioli he managed to eat about half so IÂve decided to serve him another delicious meal hoping that heÂll be able to finish it all this time. A Caesar salad topped with my delicious poo, yumm! I sit next to my little toilet and enjoy a cigarette so I donÂt have to smell his meal. I ate a lot of stew the day before and that always gives me soft and super smelly shit, quite disgusting really but perfect for aspiring toilets! Hard, soft, or even diarrhea, a toilet has to learn to swallow it all!He struggles to swallow the first few bites despite the salad dressing taking the edge offÂ This is gonna take a while so I get comfortable resting my feet on his back. When he doesnÂt make enough progress, I push his face into my shit. Come on boy, eat it! YouÂre the one who wanted to be a human toilet! To add a little more flavor I keep spitting into his salad and drop my cigarette ashes into it too. He gets to consume ALL my waste!It took him 15 minutes to finish his meal but today IÂm proud of him, he managed to eat it all and kept it down too, might make a real toilet of him yet! The training WILL continue until heÂs able to eat it pure.NOTE: I forgot to plug in the microphone so unfortunately this clip is without any audio.

Look at these sexy over-knee boots - they need a proper cleaning - and you'll clean them - with your tongue of course! Start by licking the dirty soles - who knows what kind of grime got stuck on these leather soles :-D And then you'll open your mouth and suck the heel clean - close your lips around the heel, get your tongue on it and then slide it slowly in and out until it's completely clean. Then it's time to clean the rest of the boot. Starting at the tip you'll follow my finger up the boot leg until you arrive at the very top. And then back down again to lick the leather next to it ... and you'll continue like this until you've licked the leather from all sides! And then it's time to take care of the other boot! And you better put some effort into it - maybe I'll lend you, my boot whore, to my girlfriends then as well :-D

Hi) I missed you, and you? I want to please you with my new video, youÂll like it, (here everything you love so much) If you bought my panties, rather get them (they are suitable for creating the right atmosphere) here only you and me .. And now IÂll show you how I spend my free time, a huge pile of shit, smearing on the face and body, the dance of dirty ass and of course the test of shit tastes) ItÂs just impossible to miss! See you in the new video)

These fingernails are very hot! Beautiful, long and perfect in shape. You can't keep your eyes off these beautiful hands anymore. The ladies Hanna and Jane show you their hands and they are so sexy with their dangerously long fingernails. Look at them and let yourself be seduced by these gorgeous hands!

7 days of shitting huge shits in my toilet ! This would be your breakfast every morning if you are a hungry slave ! Send me msg and tell me wich day you love the most !

These fingernails are very hot! Beautiful, long and perfect in shape. You can't keep your eyes off these beautiful hands anymore. The ladies Hanna and Jane show you their hands and they are so sexy with their dangerously long fingernails. Look at them and let yourself be seduced by these gorgeous hands!

Miss Serena I want you to worship my smelly summer shoes and my bare feet at my home. Get on your knees in front of my couch and and lick the soles of my shoes. After that you will sniff inside my sweaty shoes and finally I want to watch you worshiping my bare, smelly feet !

My morning was hectic. I was so busy today that I had to simply Âhold itÂ. I couldnÂt get home fast enough. the moment I got into the room I bent over opened my ass cheeks and the soft shit glided out. You can hear is splats as it falls to the floor. It made such a mess on my thighs and legs I wiped for ever to get it off. I also smeared on my cheeksÂ

DoesnÂt my sissy slut look lovely in her red lace corset and fishnet stockings? SheÂs so desperate to be a woman that sheÂs even wearing some fake breasts! To me sheÂs still just a slave so first things first, letÂs make it clear whoÂs in charge here. I make her lean over the radiator and beat her ass with my riding crop. OMG! Look at the panties on her fat ass, that butt is getting flossed for sure... She immediately starts to moan and grunt once I get my rubber flogger out, what a crybaby. Anyway, I think we set the record straight so I remove the ball gag from her mouth and make her get on her knees. Time to suck my strap-on! Yes, thatÂs it, nice and deep! SheÂs so bad at it though, constantly gagging when itÂs not even that big. How will she ever serve as a cumdump for men if she canÂt even handle a small strap-on? A LOT more training seems to be required and to get her used to how men will treat her IÂm slapping her face with my strap-on, hahaha. Time to change positions, I lay her on her back and start riding her face from above, I feel so powerful right now but oh whatÂs this? Her wig fell off! Just patheticÂ

This latex object is lucky to be of use to us! There is nothing that feels hotter on the skin than latex. First, our object is oiled and then tid to the bed! Then we oil the slave again and oil ourselves too! So hot! Part 1 of 5 of the video 'Latex Dreams'!

128702 - Hard Whipping - Punishment of the Slave by Mistress Redhead GirlsFetishBrazil

Hard Whipping | by Mistress RedheadThe punishment of the slave: There were many lashes, without any rest, the slave suffered every second, he had a gag, but could hear him dying of painRedhead: She is very cruel, she has a very heavy hand, whipped the slave with all her strength, she gave whips and still laughter from the slave's suffering, pure sadism

The mistress came into the room with the heaviest belly ever. She needed to unload her shit, or else she was going to make a mess out in public. Peeling off her napkin first, she pushes it into the hole, where the head of a shit slaze was waiting. The shit slave looks at the sanitary napkin quizzically before trying to lick the center. It taste of pussy juices, and he loves it. What a treat! Though light in taste and not something it normally consumes, the human toilet is appreciative of whatever is given to it. That is the mark of all good human toilets. Pulling down her pink panties, the mistress closes her eyes and focuses on the dull pain in her belly. She knows itÂs going to be a lot so she braces for a storm of shit. It began pouring in thick, brown sausages, one after the other. The shit slithered out of her tight hole landing in tall pile on top of the shitÂs slaveÂs face. The turds were thin and brown, and stank powerfully, coloring the air of the entire room. The shit slave could barely keep up as he tasted the bittersweet sausages already lodging near his throat. The mistress kept pushing and several more segments came out, almost burying the slaveÂs entire face. Smiling at her work, the mistress takes one final look at the shit slaveÂs overfilled mouth and pulls up her pink panties.

My little slave worm had to be punished as he annoyed me quite a few times. Lately he had destroyed my Paypal account with inappropriate comments. For punishment I thought of something really nice - at about 13 degrees outside temperature and 10 degrees in the water he had to move his ugly ass in my pool. A few times I have submerged him. I hope this shivered useless slave has learned his lesson! 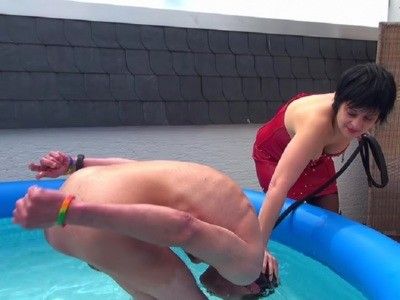 Unlike losers people have a schedule full of socializing, dinners, partys and dates for the weekend.You on the other end dont have any appointment at all. Nobody that wants to meet with you and is interested in you. Why should they? You are gross and boring af. So you will spend it like always in your room.Sitting in front of your computer screen and jerking off non stop like the fucking freak you are. Keep stocking up on my clips as they are all you have loser. I am so kind and give your weekend some kind of purpose and now i even constructed a joi schedulefor you. Starting every Friday and ending at Sunday evening. Of course you will have to pay your cum tribute when i am done with you but lets see if you can evenmake it that far. haha Its all about stroking, stroking and some more stroking. Sounds good to loser like you. I know. You can thank me later.

Miss Serena " I want you to worship my smelly summer shoes and my bare feet at my home. Get on your knees in front of my couch and and lick the soles of my shoes. After that you will sniff inside my sweaty shoes and finally I want to watch you worshiping my bare, smelly feet !

My young novice Peter is visiting again! Apparently he does not get enough of me as mistress! Who is surprised?But the last time he came out as a beginner in the field of pain therapy and showed up to now little stretchy for my thick rubber tails, I have discovered with my unique flair, a new talent at Peter! And as sweet as I am, I encourage Peterchen's education, since I am a true expert in the field! Peter's talent is to be the perfect ladies' room! Without grumbling or growling, my new loo receives my spit, my cigarette and my divine brown gold! Slowly I let my caviar slide into the open mouth of Peter! I even film myself, up close. Brav and smacking Peter eats his mistresses sausage! Since he is doing so nice, I finally feed him and personally give Peter his relief!