Now Lady Lola lashes the slave again and again. He's also not finished licking Lady Lucy's shoes. There is something else stuck to the shoe sole. Even Lady Kimi's shoes need a slave tongue.https://www.yezzclips.com/store599

It's Black Friday, and most people are out blowing all their cash with the intention of "getting good deals". This year, you're shopping for me. I want you standing in line to buy ME a big screen tv and all the latest gadgets, and jewelry. Go serve your purpose. Fight for me, spend on me. You're my wallet warrior, and you're to give EVERYTHING to your Queen. Serve me. Show me you're worth my time. Nothing makes you feel more needed, than being a human wallet. Trust me, it's the only thing I want from you...your money. Spoil me. Happy Black Friday! Remember who you shop for.

I need to shit so bad after eating really spicy chili yesterday.. I decide to serve up some soft serve and pee in a glass cup! Shit was huge and thick but missed the cup. Watch me pick up my shit at the end and show you close up the mess i made.

You are so pathetic loser and today you will stroke staring at my favourite dusty boots! Buy this clip immediately and stroke as real loser! I thought that we had found a solution to the problem of your weird sexual obsession with my kitten heels. We came to a private agreement, didn't we? Yes, it is a lot of money for a pair of well-worn shoes. That's how much I think they're worth... to you. What is it about them that makes you want them so much? They're just the shoes I wear to work nearly every day. You can smell my feet in them. And that's why I priced them accordingly. It must be very frustrating to you when you can't afford them. But we both know you'll pay it because you're that lonely... that depraved... that you'll go home and fondle my footwear. You have two more days to pay, or I'll throw them out and you'll never see them again.

141370 - amazing video! n127 Miss Joel and Mimi have a slave who licks their sweaty and dirty feet

Suck dick slave, suck it, bitch, take dick deeper down in your throat. Lick his balls, fucking his anus your tongue. Suck his cock, and I'll punch the fist in his ass. Oh, I feel so much shit in his ass. Let me smear his cock with shit to make you suck sweeter. Now go ahead and keep sucking that shitty Lollipop. You like the taste of shit, whore. Ha-ha, the slave came in your mouth, and you were so scared that you shit yourself, bitch. You're so sexy now. Give I'll kiss you on your dirty shitty lips.

I thought that we had found a solution to the problem of your weird sexual obsession with my kitten heels. We came to a private agreement, didn't we? Yes, it is a lot of money for a pair of well-worn shoes. That's how much I think they're worth... to you. What is it about them that makes you want them so much? They're just the shoes I wear to work nearly every day. You can smell my feet in them. And that's why I priced them accordingly. It must be very frustrating to you when you can't afford them. But we both know you'll pay it because you're that lonely... that depraved... that you'll go home and fondle my footwear. You have two more days to pay, or I'll throw them out and you'll never see them again.

ITALIAN SPEAKINGI'm going to enjoy a equestrian event, and I have three ponyboys to choose from. The one I picked is just ripe for fucking, the other one will be used as my step up. The third one will remain in his cage. However, he is anxious and neighs quite a bit to try to attract my attention. Not today.. I have made up my mind and have placed my little pony over the bench. I call my step up to crawl over, and make sure he remains in place throughout. My pony is wearing a bit and bridle with reigns attached, and I'll put them to good use to keep him in line. I'm wearing a large strapon for the event, and as I step up and take hold of my pony, he lets out a huge neigh of appreciation. What a blast as I line up his ass ready to receive hit huge treat. I quickly ram it home and begin to give him a good fucking. Pulling tightly on his reigns, and pushing the bit into his mouth. He squeals as I penetrate more and more. However, it makes no difference as I make him suffer while I enjoy my ass fuck rodeo...

VC is bad. After some cooling following unsuccessful attempt of starting single remaining biggie I continue under-the-roof attempt to terrorize DarinaÂs ears. Now she B2P smallies while Nastya inflates transparent biggie. We run out of patience waiting for VC 2 finish, so Darina had to get herself in hands and finger Âpop clear. Anyway it was quite overinflated.

***Camera 2***Algerian Goddess Amina sits on a face for the very first time and she loves it! Controlling someone's airway beneath her bottom is a huge turn on for her. There's some pretty hard face slapping in here too when she slaps my face back under her bottom! She was smiling a lot as I smothered between her butt cheeks slowly turning colors -she didn't go easy on me! At times it felt like she was trying to end me!CAMERA 2 -I WOULDN'T RECOMMEND BUYING THIS ANGLE AND TO WAIT FOR THE MAIN RELEASE. THOUGH IF YOU LOVE 'FACESITTING' FROM A SIDE VIEW, YOU WILL PROBABLY ENJOY THIS VIEW. IT'S A BIT OFF CENTERED BECAUSE THE CAMERA WAS PLACED BY A TOTAL AMATEUR (ME!). 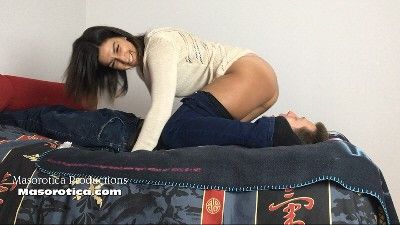 Your gorgeous, British, brunette Goddess is wearing tight, thick, white and very warm leggings with even thicker white, sport socks. They feel so good, both on the outside and the inside. Do you like to watch my hands as they rub all over them? I can feel the heat rising from the crotch. I'll bet you'd like to feel it, wouldn't you? Watch my hand as it presses against my crotch. Oh, yes... that feels so good!

Mistress Jenny and I are currently recording a pay cunt together! Here we offer you the possibility to serve us both! You can find out what we expect from you in our clip.Clip Language: GermanDein Leben als unsere ZahlfotzeMistress Jenny und ich nehmen aktuell eine Zahlfotze auf und zwar gemeinsam! Wir bieten dir hier die Moeglichkeit uns beiden zu dienen! Was wir von dir erwartern erfaehrst du in unserem Clip.

My sissybitch not only blows cocks, he is also on addicted to my heavenly and especially intense foot smell. After a long day with nylons in boots, my sissybitch is allowed to compete. As if coerced, he sniffs my foot odor and enjoys every sniff. After the sniffing session he is allowed to wash my feet extensively.

My slave is short, tiny and weak. There's really nothing that he's good for other than to use as a pony and a seat. I have some really great plans to put him to use, though! I'm going to shrink him down to a miniature size and break all of his little bones! HeheheIn part 2, I make him smell my heels and panties as I undress. Then, I make him stick his tongue deep into my asshole. I fart directly onto his mouth and it's kind of wet and messy. His face gets a little dirty but he cleans everything up. Then, I turn around and fuck his face, berating him in his helpless state. I tell him what it's going to be like when he is tiny enough to fit inside of my asshole. I'm going to make him eat everything that comes out of it. He'll be so small that he'll be buried in it.I fuck his nose and tongue very roughly. He moans in pain but has no will to resist and licks my pussy until I cum. It feels so good. I bet Kitten thinks I'm finished with him now, but I'm just getting started. I tell him that it's light out for him, and cover his face entirely with my ass. I'm going to use my shrinking machine on him. When he wakes up, he's going to be very, very tiny.

I just woke up and finished my morning walk and now need to poop. While I was walking, I was thinking of you, my toilet slut, wanting to fill your mouth up with my shit. I stop and pull down my panty and pants then push out a couple nice turds. I know how badly you need to taste my yummy shit, so I pick up my turds having a taste for myself. I take a few licks tasting my own poop encouraging you to lick and taste more of my hot shit. You need my sexy shit in your toilet mouth!

How hard is it to train a seat to do as it is told? Stay still, don't move, don't breathe. It's that simple. Well I thought it was, but my stupid, weak, pathetic slave is absolutely useless so it's punishment time.In part 1, I fart in my panties and then stuff them in his mouth. Since he didn't eat up all of the dinner my ass fed him, he doesn't get to lick me while I play. He just gets to sniff when I allow him air. I smother him for nearly 20 minutes. All the while, he squirms to for air beneath me, but is constantly cut short. I tease and berate him. I tell him that real men get to fuck me. If his dick wasn't so tiny and he wasn't such a disgusting little virgin then he might actually have a chance with me. But until then, he will remain without the ability to orgasm or receive pleasure of any kind.While gaming, I tell him that if I lose, it will be his fault, and he will receive punishment. He is already in trouble for the amount of whining and criyng he is doing while I bring him to the brink of consciousness. He is already in trouble for not finishing his meal. Oh no, it looks like I lost! Looks like my slave is in for hell.

Bonnie's professor sent her to a job interview with you thinking it would be a really good placement for her. Bonnie likes what she hears and wants to know what she has to do to get the job. After learning there's a test she has to take, Bonnie resorts to other ways to show off her abilities.