Today our slave's will be stapled shut - and his cock too! Lady Alice and I will first staple his mouth shut, then that's it with screaming and talking back. His mouth remains closed. No chance to open it again! Next it's the turn of his cock. We bring him down to his knees and we demand that he jerks off. The head of his dick is trapped behind his foreskin! He can't get hard, but we want him to keepon jerking!

The slave was supposed to bring his boss s receipts but instead he brought some flyers. She makes him lie down, kiss her shoes and eat small pieces of paper. She puts handcuffs on him and ties him up. She sits on the couch and makes him lie down and kiss her boots. Then, she gets up, walks on his back in high-heels (she weighs 70 kg) and sits down again and makes him kiss her feet. She holds a whip which she uses occasionally. Time: 11.33 min.REAMSTERED - movie from 2005

This is my friends' movie. As you can see on the picture it has margins on both sides. The night after wedding... It was really extraordinary night... Time: 6,33 min. Remastered - movie from 2003.

Posted on: 2018/02/09
Keywords: Shitting, Shitting Clips, Scat, Scat Clips, Playback, My friend and I invite you to, then a friend will want to ma

Sasha's fan asked her send him shit. And my slut with pleasure fulfilled his wish. She asked me to poop on my favorite black toilet seat. For the sake of such a case, of course, I could not refuse. Shit fell out of her ass in big sausages and formed a rather large pile. Fan will have something enjoy when it comes to him in the mail

Mistress Antonella is gorgeous in the position of Doctor Antonella, wearing black latex catsuit, black stiletto shoes. Her slave is kneeling, waiting for her Mistress.She can start to play by slapping and an efficient ballbusting.Afterwards, She prepares a reward for her slave, Mistress Antonella opens the zip of her latex catsuit and have a pee directly in her glass of Champagne. She spits in her glass of Champagne in order to obtain a good cocktail. Then, She wears a strap-on with an huge black dildo and She orders her slave to perform a blow job, amazing view to see her slave on knee. Mistress Antonella decices to put a huge steel butt plug in the ass of her slave and She humiliates him because it's to big for his ass.

I've put the slave in the smotherbox and bound his hands to the box as well - so he can't move at all. Then I told the slave that I'm going to sit down on his face and smother him under my ass - and that he can snap his fingers when he needs to breathe and wants me to get up ... silly slave ... he really believed I'd get up :-D Sometimes I simply ignore his panicky snapping - sometimes, I trap his hands between my calves and thighs - so he can't snap at all :-D I enjoy how he's panicking more and more under my ass as he gets afraid that I might not get up in time!

Her villainess-hips sway in your face as she commands you to give her the codes to her enemies' security systems. You try to resist, but when she puts her naked ass and pussy in your nose you find yourself weakening... One taste of her pussy juice and your mind breaks, turning you from enemy spy to eternal drone. You utter those needed codes and jerk your dick to her perfection. You just can't help yourself...

The second episode of the mini-series about the domineering Goddess Angelica and the suffering of her faithful mare. In the second part, Angelica continues to ride the mare. The girl trains the horse by giving her different commands. The mare does everything according to the instructions of the Mistress. The mare gallops left, right, in a circle, back and forth, and also raises her left or right hand like a circus horse while Angelica sits on her back. The horse is tired, but the Mistress wants to gallop even more and even faster, so she urges her faithful mare on.

Welcome our newest model to the brand, Princess Natalie. In her first clip she decides to smother her slave in her yoga pants, sitting FULL WEIGHT on his face, shaking, bouncing and grinding her fat ass all over his face. Princess Natalie sits in different positions, enjoying every second of smothering her slave. Enjoy her first sexy facesitting clip ;)twitter: Sadistic416New videos every week!

ITALIANToday Spolly is totally at the mercy of me and my two female Mistress friends. We hold him on three leashes while he kisses our feet, and we insult him properly for how lousy he is. Each of us has a whip and we start warming his ass bu,t today, something else is waiting for him too. In fact, the slut will be fucked in the ass. While Spolly is being fucked by the blonde Mistress with her strapon, my other friend and I continue to whip and insult him. After a few minutes the whore can no longer resist, but for us it is not a problem: three sadistic minds like ours do not have difficulty thinking about how to continue to humiliate him.

I have a short time before I go out to a meeting, and IÂm going to enjoy a cigarette. My slave is going to join me before he begins his chores. To make sure IÂm comfortable, I place him outstretched on the sofa and tell him he is going to help me relax. I sit on him and light my cigarette. ItÂs more fun having him as my human ashtray, and as I move around on top of him he lets out some nice squeaks. I shut him up by flicking my ash in his mouth, and tell him heÂs so fortunate to be My Pet CushionÂ 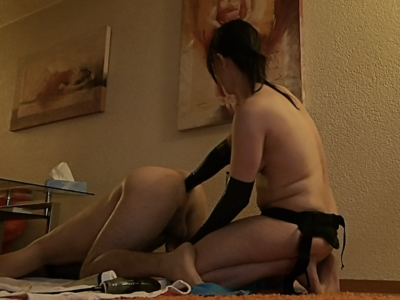 My slave is today made into an analsissy! First he gets the right clothes on. A sissy like him has to look like a sissy before she is used. So out of the men's clothes and into stockings and pink panties! First, the sissy will fuck her asshole by herself in preparation for my extremely long, thick strap-on. Then she is fucked until she screams. Go on - head down, ass up!

Mistress Zora kicks the slave to the ground and makes sure that he will never be able to get up again. She kicks and hits him with the riding crop. She encourages him to try - but whenever the slave attempts to get up he is cruelly beaten down to the ground again by his mistress. Mistress Zora visibly enjoys how the slave suffers and just won't let up. She hits him so hard with the whip that it finally breaks... so now she just uses his leather belt instead!

Madelyn is a really sexy 20 year old girl who heard about our sweaty socks challenge from one of her friends, so it looks like she was more than happy and really curious to try it out as she seems like a very dominant girl! She has been wearing the same pair of white socks for about a week now, so her slave will have to deal with her sweaty socks and feet in his face for two straight hours without complaint, while she relaxes and watches Netflix! It was a very long day at work with her boots on on top of that, so it should be a very intense experience! Madelyn takes pleasure teasing her slave with her boots, before making him take them off to completely cover his face with her sweaty white socks! Her socks were actually super warm, and very smelly, but it looks like she is laughing at him and rubbing them all over his face! She makes him take deep breaths in her socks, and makes him lick the sweaty bottom of her socks too! The sweaty socks challenge is actually really long, so she asks for a nice foot massage as well, while she enjoys her glass of rouge and her Netflix session! Madelyn also thought it would be a good idea to give her feet some fresh air after an hour with her sweaty socks all over his face, so she makes him take her socks off with his teeth, and just push off her dirty socks in his mouth to make him chew on them for a while! She covers his face with her sweaty bare feet after that, and makes him take deep breaths in her feet! She also wants him to lick the sweaty bottom of her soles, after sweating for eight consecutive hours inside her boots, so the slave will just have to obey her instructions! Madelyn is very intense, absolutely gorgeous, and totally dominant! You will instantly fall in love with this cute little goddess! Madelyn is actually foot size seven, and the full version of this sweaty socks challenge is actually 84 minutes long! You will find this version directly on the next page, or just below this version! Really hot clip alert!

Let's see how much your face can endure ... standing on your chest isn't too much fun after all - so I'll step on your face and keep standing on it! You can feel my whole body weight on your face, feel how your face is distorted and flattened under my foot soles. I'll try out some different positions - standing with my heels on your chin and my toes on your forehead, or standing sideways, with one foot across your mouth and the other one on your forehead, or maybe standing on my tip-toes and increasing the pressure even more?! But I get bored with that pretty quickly as well - so I'll push your limits even further and stomp down onto your face and even jump onto it. Let's see how long you can endure this extreme pain!