Here are 15 short pee scenes! Lola loves using human toilets and she sure can pee a lot! ItÂs almost unbelievable the amount one tiny woman can manufacture! These little clips are mostly with a casual look and shot with mostly the same toilet slave. Sort of like a behind-the-scenes at Brat Princess Studios.

Goddess Vanny really likes to torture her slaves with facesitting. She pulls up her dress and sits her sexy nylon ass right on the face of one of her pathetic losers! He gives up control to her and from now on has no will of his own. Goddess Vanny decides everything for him! She even dictates when he can breathe again. But until then she remains quite comfortable sitting on his mouth and nose and torments him for as long as she wants with air deprivation!

ITALIAN SPEAKINGI have my slave ready to be shown the power of his Mistress. I will carry him around, and dump him on the floor. He is like a little rag doll in my arm arms, and I have complete control over him. It?s also a good workout for me, and allows my slave to experience the elite power of his Amazon Queen?

A slave is bound in the basement very tightly underneath the Mastermind Crafts toilet chair. I enter silently and piss down its throat. ItÂs very challenging for the slave to swallow with its mouth held open by the clear pipe. A struggle is a good entertainment! LetÂs do more challenging stuff! I want to see more struggling. I take a pretty sizable shit into the clear plastic bowl of the Mastermind Crafts apparatus. I push the shit down the clear plastic tube and into the slave with my fingers. I still canÂt pack it far enough, so I get a toilet brush and pack it farther down into its body. The slave must hold My shit in its mouth for a while, which is actually more difficult than swallowing. Eventually, I remove the chair and make the slave suck the last of My shit from the toilet brush. I spit all over the face and in the eyes. The slave is so cold on the basement floor, heÂs nearly hypothermic. You can see him shaking in the video. I know he wants to come up into the house where itÂs warm, but I deny him this. He hasnÂt totally satisfied Me with his suffering yet. I think he can still take more.

Are you going to let a little rain and chilly temperatures ruin a camping trip with three hot young women? They don't want to rough it, but are willing to spend some time with you inside the house. Sure, why not? It's warm, comfortable and dry... for a little bit, until the girls show what they planned to do once they kicked you out of the tent. Thanks to team work, all three girls have their clothes off quickly and get down to the business of pleasuring each other. Luckily, you have a camera to record it all so you can show your friends.

I will dance twerk for you, I know you are a professional judge and I want you to appreciate my dance at the end I will poop on my feet and smear the shit with them

Posted on: 2018/02/06
Keywords: Shitting, Shitting Clips, Scat, Scat Clips, Playback, I will dance twerk for you, I know you are a professional

Sit back and enjoy this compilation of body tease clips, all unseen and/or uncensored! *no audio due to music copyright* - please do listen to music of your own choice in the background of this clip if you wish. Worship my petite frame, peachy lil booty and perfect perky tits as I model various outfits and lingerie.

ITALIAN SPEAKINGToday I am going to allow my slave a little treat. However, it?s not what he thinks. As he was busy doing his chores, I was relaxing and enjoying some fruit. My bitch decided to complain that he was hungry. Well? I said to him I can fix that for you. I went and sat on my throne, and ordered him to bring my fruit. With him kneeling beneath me, and putting the grapes to one side, I told him he may join me. However, as a sign of appreciation, he has to lick my beautiful boots. If he does well, I might share my fruit with him. To give him some incentive I also have my dressage whip to hand. After some licking and whipping discipline, he has earned his reward and I decide to share some grapes with my bitch. I chew on some of them, and spit them out for him to lick up. Then I drop some more, and trample on them making sure they stick to the sole of my boots. If my bitch wants to enjoy the fruits of being my slave, he MUST submit to my Pet Food Control?

Our camera guy Chris thought he was soo tough and challenged Emma to a match. Emma stands 5'8 and weighs in at a sexy and muscular 155lbs, while chris stands 5'11 and weighs a mere 130lbs. Emma laughed at his challenge and agreed. Well chris was in for the surprise of his life here. Emma is evil, and a very torturous bitch towards Chris. Emma immediately lunges at Chris and takes him down in a reverse headlock, then mounts him in a very high and tight SGP putting his arms high above his head. Chris struggles to dislodge Emma but she was going nowhere. She uses great hand over mouth smothers and drives her crotch down HARD into his throat choking the life out of him. She repeatedly does this breaking him down. She actually did this so hard on him it split his chin open. Watch his face turn almost blue and purple, as you hear him gasp in serious pain. Emma still does not let up off him, she rolls him like a ragdoll into a super tight forward headscissor,and Chris actually shakes from the pain as Emma squeezes his head so hard we actually thought it was going to snap off. Chris was getting very dizzy and starting to black out as tears filled his eyes from the pain. We almost stopped the match as Emma would just not let up off him, Chris was actually signaling to stop, but Emma didn't want any part of that until she thought he was thoroughly beaten. She continues with hand over mouth smothers, and some great facesits, that left Chris barely able to move. She decided he had enough and facesat Chris until he almost , making him shout out that he gave up, and she would not get off him until he admitted he had enough. Emma is cruel, evil, and hey who would not want this type of from such a hot girl? Watch this video and find out!

Have you been nice and busy for your mistresses and earned enough money for them?! Mistress Jane and Queen Hanna have high expectations of you and are now properly cashing in on you. You give them your entire monthly income and show them how much extra you have earned for them. But is that really enough?! How much is your money worth to the two insatiable mistresses?

I shit in my stockings then I take them off and put my shit filled stockings over my head.My shit has a real nasty irresistible smell that makes you want to eat it but I donÂt I just smother my head inside my stockings and them I take a plastic bag and cover my head with that.The smell of my shit and the fact that I am starting to struggle to breath is quite a turn on

my friend and I take off our panties. we turn our ass to you and start to shit on glass plates. it turned out to be two super heaps of shit. in the second part of the video, I am walking in the park. I want to shit. take off my panties and pants. shit and continue walking. further, I'm already at home. I raise my short skirt and take off my panties. shit in a bag on the chair. someone will be a great gift. and in the last part of the video, I came home. I want to shit. undressing. start to shit on the tray. happy with my smelly result 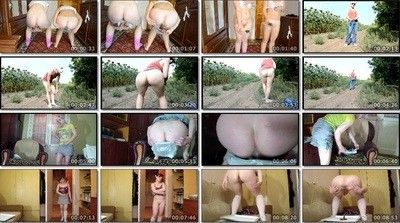 I'm going for a walk after riding and accidently step onto an egg that's in my path - which is obviously flattened completely under the hard boot soles right away, but I still noticed it. I find some more colorful eggs on the way - and these I crush on purpose - some of them I crush slowly, others are just stomped flat right away! Then I find a delivery truck - with some little rabbits working hard to get their eggs back into the truck - they must have lost them on the way. Obviously, I can't let them get away ... they're all crushed under my cruel boot soles, as well as their freight. And in the end, I also take care of their delivery van and trample it under my boots until it's completely obliterated! This is a non-exclusive custom clip for a fan. If you want me to do a custom clip for you, send me an email to marissa@madamemarissa.com!