Your gorgeous, British, brunette Goddess is wearing tight, thick, white and very warm leggings with even thicker white, sport socks. They feel so good, both on the outside and the inside. Do you like to watch my hands as they rub all over them? I can feel the heat rising from the crotch. I'll bet you'd like to feel it, wouldn't you? Watch my hand as it presses against my crotch. Oh, yes... that feels so good!

Mistress Jenny and I are currently recording a pay cunt together! Here we offer you the possibility to serve us both! You can find out what we expect from you in our clip.Clip Language: GermanDein Leben als unsere ZahlfotzeMistress Jenny und ich nehmen aktuell eine Zahlfotze auf und zwar gemeinsam! Wir bieten dir hier die Moeglichkeit uns beiden zu dienen! Was wir von dir erwartern erfaehrst du in unserem Clip.

My sissybitch not only blows cocks, he is also on addicted to my heavenly and especially intense foot smell. After a long day with nylons in boots, my sissybitch is allowed to compete. As if coerced, he sniffs my foot odor and enjoys every sniff. After the sniffing session he is allowed to wash my feet extensively.

My slave is short, tiny and weak. There's really nothing that he's good for other than to use as a pony and a seat. I have some really great plans to put him to use, though! I'm going to shrink him down to a miniature size and break all of his little bones! HeheheIn part 2, I make him smell my heels and panties as I undress. Then, I make him stick his tongue deep into my asshole. I fart directly onto his mouth and it's kind of wet and messy. His face gets a little dirty but he cleans everything up. Then, I turn around and fuck his face, berating him in his helpless state. I tell him what it's going to be like when he is tiny enough to fit inside of my asshole. I'm going to make him eat everything that comes out of it. He'll be so small that he'll be buried in it.I fuck his nose and tongue very roughly. He moans in pain but has no will to resist and licks my pussy until I cum. It feels so good. I bet Kitten thinks I'm finished with him now, but I'm just getting started. I tell him that it's light out for him, and cover his face entirely with my ass. I'm going to use my shrinking machine on him. When he wakes up, he's going to be very, very tiny.

I just woke up and finished my morning walk and now need to poop. While I was walking, I was thinking of you, my toilet slut, wanting to fill your mouth up with my shit. I stop and pull down my panty and pants then push out a couple nice turds. I know how badly you need to taste my yummy shit, so I pick up my turds having a taste for myself. I take a few licks tasting my own poop encouraging you to lick and taste more of my hot shit. You need my sexy shit in your toilet mouth!

How hard is it to train a seat to do as it is told? Stay still, don't move, don't breathe. It's that simple. Well I thought it was, but my stupid, weak, pathetic slave is absolutely useless so it's punishment time.In part 1, I fart in my panties and then stuff them in his mouth. Since he didn't eat up all of the dinner my ass fed him, he doesn't get to lick me while I play. He just gets to sniff when I allow him air. I smother him for nearly 20 minutes. All the while, he squirms to for air beneath me, but is constantly cut short. I tease and berate him. I tell him that real men get to fuck me. If his dick wasn't so tiny and he wasn't such a disgusting little virgin then he might actually have a chance with me. But until then, he will remain without the ability to orgasm or receive pleasure of any kind.While gaming, I tell him that if I lose, it will be his fault, and he will receive punishment. He is already in trouble for the amount of whining and criyng he is doing while I bring him to the brink of consciousness. He is already in trouble for not finishing his meal. Oh no, it looks like I lost! Looks like my slave is in for hell.

Bonnie's professor sent her to a job interview with you thinking it would be a really good placement for her. Bonnie likes what she hears and wants to know what she has to do to get the job. After learning there's a test she has to take, Bonnie resorts to other ways to show off her abilities.

Raven wants to try web camming, but she's a bit nervous and wants to practice. You wouldn't mind being her guinea pig, would you? You'll have to be patient with her because she's quite shy, or so she says. Raven believes that if she can get your cock hard, that means she's doing a good job. So, get out your cock so she can see how hard she gets you.

I have been so busy lately, but I always try to capture all the sexy shit that comes from my ass for my toilet fans. Enjoy following me around pooping outside and in toilets a few times. I stay turned on while I pooping thinking of you watching my pussy and asshole while I go to the bathroom. I hope you love my more shits for you it keeps me so turned on knowing you love watching and listening to me while I go pee and poo.

This morning i am preparing the breakfast in the bath thub and i pee first shit after and take it with my feet to feed you so today you will eat the delicious poop from my perfect feet , enjoy the creamy , tasty shit i did for you slave! 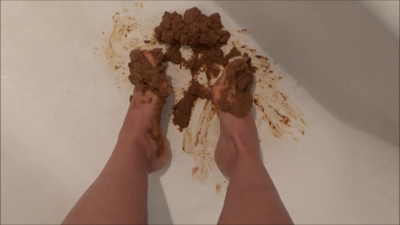 One of my FAVOURITE old clips of mine - especially because it comes with a great story!This was SUCH a fun video! Every once in a while itÂs fun to poop somewhere I shouldnÂt Â like on an external harddrive! I used this thing for years and thought it deserved a special, sexy sendoff before I got a new one. During the clip, I tell the story of the boy working at the store who gave this to me for free Â flirting no doubt ;D and wonder what he would think as I unload a creamy soft-serve dump onto his gift and then piss a hard long stream on it!! What do you think heÂd think

The House welcomes Maitresse Madeline to the Upper Floor as the trainer of male slaves. Councilman Tripod is in attendance. Mr. Acworth unveils an impressive statue made by his mother.

The boss interviews a candidate for a job as a cleaning lady, she is very obedient and fulfills any commands of the young boss. The girl orders her to lick the soles of her leather boots, the cleaning lady fulfills all her whims ...

Today, Lana decides to play with her slave girl. She walks around the room and holds her slave on a leash. A slave girl crawls after her Mistress like a pet. Lana orders to kiss and worship her feet and the slave girl immediately obeys the order. But Lana doesn't always like the way a slave girl obeys her orders, and from time to time she hits her with a whip.

While Fabri cares extensively for my divine feet and is allowed to inhale their fragrance deeply, he will be simply ignored and set aside. In contrast, I am very well enjoying the little break and have a nice relax.

Take a look at my new white jeans - isn't it breathtaking? And guess what - it's breathtaking in more than one way! I'll simply sit down on your face to give you a very close up view of my sexy ass - and smother you underneath it at the same time! Do you like facesitting? I bet you love it! But it gets harder with every second, doesn't it? The oxygen deprivation, the pain of the hard jeans fabric flattening your nose - but in the end it's all worth it for this divine sight, isn't it?! Let's see how long you can take it!

Our Footlicker is allowed to take care for 4 feet directly and pamper them extensively with his slave tongue. The barefoot feet of Lady Stefanie and my feet, carefully draped in nylon. He can kiss them, lick them, give a blow-job to the toes and even to the whole foot from me ... haha

Mistress Jennifer is someone who never leaves her slaveÂs misbehavior unpunished, of course, but it looks like tonight is a very special case. She got so pissed off by that naughty fucker of a sub that she decided to go for the ultimate punishment. Here you will see her pushing the bastard down on the floor mercilessly, shoving her stiletto heel up his ass and then replacing it with huge strap-on!