Winter vacation in the mountains was a dream vacation for Melissa. He had fun with his slave in the most different ways. Look at how he uses it as a human ashtray today, throws his smoke in front, humiliates him, all for her pleasure. Do you want to be the next slave to go to the mountains with Melissa?

Faye is shooting at a friend's house and needs to pee. Heading into the bathroom she sits sideways on the toilet in a bra, stockings and bright red fuck me heels. She strokes her nylon clad legs before, biting her lip, she turns and raises her legs, opening them wide and continuing to run her hands over her pantyhose tights and heels. Standing up and turning away she stands over the toilet and pees from a height into the pan. Bladder empty she wipes her pussy dry and then the seat. Always so clumsy - peeing on the seat. Sitting back down sideways on the toilet she flushes, chewing on her plump lips, and runs a hand down her nylon legs. Standing again she carefully puts down the toilet lid before walking out of the bathroom. 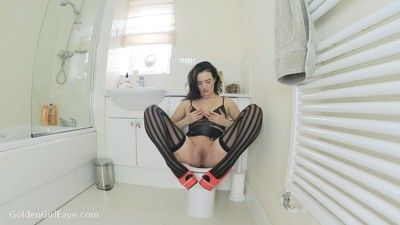 Squatting down squarely on top of the landlordÂs face, Chizue began contorting her face, pulling out the sticky poo that she has been holding in for days. She farted generously into her new human toiletÂs mouth, and the wet fart tasted bitter and sweet at the same time. The landlord opened his mouth wider, giving Chizue better access to his waiting throat. The poop was foul and almost black, and it slid stickily out of her tight butthole. It smelled like bad fish and meat rolled together, and the air around the room began to stink, too. The first few slices dropped into the old manÂs mouth, and he struggled to chew them, because he knew that something bad was going to happen to him if he didnÂt. Chizue turned around and clamped down hard on the manlet slaveÂs mouth, not permitting him to lose a single morsel of her precious shit. She could hear him slurping and grinding his teeth inside, getting the shit in between his teeth and spreading the fetid paste across his mouth cavity. Pushing his face to the floor, Chizue grabbed a small piece of shit and pushed it into the slaveÂs sticky and fetid mouth. Today was just day one of his training.

Includes foot worship pov - femdom pov - ebony - foot fetish - verbal humiliation Take a look at them. Yes. Do it. You know you can't take your eyes away from them anyway can you?My feet turn your brain to mush. You just go googoo dumb dumb when you look at my perfect wrinkled soles just hovering in front of you. Sheer perfection, delicious aren't they?They turn you into a right bitch! They control you effortlessly. You want to give in to them completely. You're a pervert who lives for nothing more than smelling and licking these perfect peds. So give in to me little foot freak. You're my little foot bitch now!

I know you love my feet - love to watch them, to kiss them and to worship them - but you'll learn to fear my beautiful feet as well now! How does it feel when my beautiful feet crush your face?! When I walk over you - use you like a human floor? Or even stomp or jump on your face?! I bet you love the close up look at my long toes as I step on your face - but do you love my full weight pressing down on it as well?! How does it feel to be hurt by the very thing you adore?!

The beautiful blonde Princess Chastity Lynn and I instruct you on how to build up your pain, while bringing you closer and closer to your climax. We're in on the secret, that with enough pain, you'll make your orgasm ten times as intense!! Get some clothes pins, a lighter, a marker, and a candle ready pain slut!! We're going to have some fun! No pain, no gain!

Includes double domination - footslave training - barefoot - verbal humiliation - foot fetish - ebony foot fetish - goddess ebony soles - wrinkled soles - milf - cock tease - foot joi - cum control - foot domination slaveLet's get one thing clear... You're here for one thing and one thing only! And that is to worship our beautiful Ebony soles.Goddess Ebony Soles and Mistress Ava Black control and contain you completely. We delight in watching you try desperately to resist what is so obvious to both of us. You are madly and passionately in love with our feet. Helpless little fucker! We can see it written all over your face. Dare you even try to desire anything other than our perfection?We know that the very sight of our creamy soles turns your brain to mush and makes you want to dribble your appreciation for us. What a lucky boi you would be to even be permitted to touch that willy for us. Right now. While we laugh and humiliate you!But you don't care! Of course you don't. Because our feet are everything to you! They are your very reason for existing. Without them nothing can satisfy you. Not even pussy. Cos all a loser like you really needs is waaay down there! Such a foot freak!

I finally received my new whip and want to test it out on my slave, best to tie him to a radiator so he cannot get out of the way! Since he is super whiny I also shove a ball-gag into his mouth to keep him quiet...Oh my gosh, I am in love with this! Right away it leaves marks on his backside! He sure is lucky that I don't have much practice with this whip yet or I would be hitting him a lot harder, hahaha.I release him and make him get down on the floor, always making sure to yank him around by his collar. After a few more strokes I remove his gag and let him worship my boots before I slap his ugly face. Loser better be grateful to serve a goddess like me!

Includes - high heel fetish - foot domination - ebony female domination - arrogant woman - pov female - verbal humiliation You are weak for my beautiful DominanceMy beautifully perfect legs and feet tower over you and make you weak at the knees. So easily owned and controlled. Like putty in my hands. Making your mind melt deeper and deeper into submission.I am your high class high heel treat.

This is very old video with Alex. This time Alex with his friend calls to the model agency and ask them for a real model for shooting. Nina is amazing woman. She is 175cm (5'9") height, 65kg (143lbs) weight, and have a 39eu (9us) footsize. She never dominates a man before, so this is first experience for her. First she put her sweaty and stinky foot in black stockings on the Alex's face. He sniffs her divine smell. Then Nina tells Alex to lick and suck her feet and toes. After that she sits on the Alex's face. She loves that so she smiles and laughts a lot. Then Nina tells Alex to kiss the dirty soles of her sexy high-heels. Her shoes looks like stripper shoes, but she walks in them outside so the soles are really dirty. Finally Nina stands on Alex with her full weight in her high-heels and trample him. This is cool trampling, also because Nina is tall wtih pretty big footsize and weights 65kg (143lbs) while Alex is only weights 55kg (121lbs) at that moment. So she looks like amazon on him. Also, Nina's heels are diggs into Alex's belly so he feel a real pain. Nina even afraid to broke Alex, but he is pretty strong slave. P.S. This is also a frist video shooting for Nina, so as she got used to listen a music during her photo sessions, you can also hear some background music here too.

Madame Du B dropping two big piles of chocolate out of her big beautiful ass. Be sure to see, tribute and follow the bootyful on Twitter @Ms_Du_B. You can now get Madame Du Bs delicious chocolate treats sent to you for your eating enjoyment.

Minato shivered when he saw five of his classmates surround him with evil grins on their faces. He was the only man in the classroom, and his classmates didnÂt have the faintest innocence in their faces. He tried to keep cool when the five girls began teasing and pulling at him, stripping him of his uniform. They pushed him roughly to the floor and the one in pink immediately pushed away the fabric covering her pee hole. Her piss was a strong torrent that was slightly yellow and salty. It washed his face, and one of the classmates gripped his chin and pried his mouth open so they can begin taking turns peeing directly into his mouth. The piss tasted slightly bitter and salty, but it wasnÂt all that bad. He began gulping their pee as fast as he could, and he taste their sex every time they would take a leak in his open and willing mouth. But pissing was just one part of their kink. MinatoÂs classmates surrounded him once again and pushed his ass up into the air, and they began playing with his balls, his flaccid dick, and his butthole. He was embarrassed when he felt endless fingers on his butthole, and all across his balls and dick. He looked up and saw a hairy, moist pussy directly above him, as one of the girls sat on his face and began grinding. The pussy smelled salty and unwashed, and he pushed out his tongue to clean it. He was now their human toilet and pussy washer, and he knew he should do a good job of it. The rest of the ladies contented themselves with pinching and pulling on his dick, and they began shaming him for having such a tiny member. And then the golden showers began, covering his entire face and chestÂ

Blonde Brat sitting on the bench train . She wearing black outfit and air nike sneakers with a little dirt on bottom .She crossed legs and show you sole of her footwear . No subway noise in this video.

The best way to torture this slave is to give him an intense facial scrub. That works wonderfully with the tight and hard jeans of Mistress Vanny! She sits down on his face, rubbing it harshly with her jeans ass. After all, the slave should get no pleasure from it! So Mistress Vanny torments him with the rough denim fabric and sits down so firmly over his mouth and nose that he can't get any air. His slave face should be stuck under her ass for as long as Mistress Vanny wants! He is nothing more than a useless slave and therefore his place is under her ass!

ENGLISH SPOKENSlave, do you want to worship my body, my feet, lick the dirty soles of my shoes? But I know this is not enough for you and you want more; I know that you watch my extreme clips and you jerk-off watching my slaves eating my divine shit. Are you so brave to come here and be my full toilet slave? Watch me while I fill this plate with my shit. Now, are you ready to smell the aroma, lick this pile of shit, take a piece in your mouth, chew it and, finally, swallow it? Then, open your mouth, slave!!!