You've been dreaming of chastity for so long? Deep, Mental? Your personal chastity dream in which I kidnap you? Who packs you, binds you Beta-Loser to me! Dive into my Brainfuck! Become my submissive chastity victim!

This is the final blow where I rock your world in my sexy leather dress and a pair of teasingly seductive legs. My mega gothic pumps increases your need to lick my heels of Goddess perfection. Time to pay BITCH!

107366 - Congratulations on the first day of summer

My shit-eater gave me flowers. But not the ones I like. Look, motherfucker, what I'm gonna do with your flowers. I'm gonna shit a huge pile of shit on them. Next time, buy me roses. Or I'll make you eat shit with flowers. And you will be deprived of the title of my toilet bowl.

On a morning walk, I had to poop, so of course, I decided to go on the railroad! I pop a squat right in the middle of the way and show my piss coming out from the front view. I have a long, satisfying pee before the poop comes out. It feels so good coming out! The light from the sun and the weather was beautiful! I hope youÂll join me on my walk!

A man is innocently sleeping on the living room couch when he is suddenly woken up by the kick of his stepdaughter! While he is still half-awake, the naked sweetheart positions herself on top of his face and then urinates directly into his mouth, causing him to accidentally swallow mouthfuls of piss! She doesnÂt completely relieve herself, instead she leaves some for later! She then pulls him up, takes off his lower garments, and teases his dick with her toes! She doesnÂt spend much time on it though, instead lays him on the ground and resumes with urinating on him, this time she pisses all over him, but she doesnÂt forget to make him swallow some of it! When she could no longer release anymore, she sits on his face and coerce him to lick and suck her dirty piss-drenched vagina clean!

You only have eyes for my beautiful, long legs. Am I right? You can't get enough, admiring them from all angles with my hot leather high heels driving you crazy as well. The sound they make when I squeeze my high heels together makes you so horny that you can't take it any longer. Just look at how high the heels are! They make my endless legs look even longer. But I know exactly what you REALLY want. You want to lay below me and admire my sexy legs and shoes from there, because this is the best angle. Let's go then, lay down on the floor!

079_Missis Mimi Foot Fetish079_Missis Mimi uses her slave's face and tongue as a tool for a relaxing foot massage. She orders him to stick his tongue out and starts to rub and to slide Her soles over it, again and again.

Now, IMAGINE the feeling it gives you when I hit those cock sucking FAGGOT triggers that were already established in your brain. I am not about making you suck cock for me rather enhance the INTENSE cravings you so deeply yearn for. Because you are seeking to belong to this OPULENT goddess who enjoys pimping the hell out of subjective DICK smokers, why on earth would I think about working when its your function to give me the finer things in life at your EXPENSE. You suck cock for me in exchange of maintaining my GLAMOROUS lifestyle and in returned you are owed NOTHING! You are so grateful to serve me with your slutty holes as I care nothing about where or how you get my cash. Just DO IT FAGGOT. Get my money by transferring your penis puckering skills out there in the world for me.You're guided further into my BEDAZZLING voodoo visualizations to practice sucking big black cock at your BEST as I expect PERFECTION. You want nothing more than to race to the challenge in providing your worthiness. Pussy is no longer a desire designed for you after I am finished REPROGRAMMING your pathetic male-pig libido. GAY is the way and now you are the HUMAN-PUSSY to MY ADVANTAGE. .

The slave dog is pulled on its leash by Mistress Jane... This stupid dog is way too lame and Mistress Jane decides to punish him for it. Queen Hanna joins her and the girlfriends pull out their crops. They hiss through the air as Queen Hanna and Mistress Jane land them on the slave's body. The crop blows leave clear red stripes on his back... This sight motivates both of them to hit him even harder. They decide to tie him up regularly from now on in order to beat his back bright red.

The most gorgeous thigh high latex boots in the world are so ready to be licked and guess who's doing the honor of cleaning them to an absolute cleaning? Well, don't just stand there human-floor freak, these boots can't clean themselves!

Mistress Anfisa has for a long time been looking forward to a small walk with her slave horse. She puts the rope around his neck and sits down on his back. Of course she won't be walking herself. Her human pony does that for her and carries her on his back. Mistress Anfisa takes a whip to help the pony go and tries to drive him to top performance. Round and round he walks, just as his strict female rider wants him to. You can see how exhausting it is for him... This loser pony sweats and snorts. He simply has no conditioning! That's a good reason to sell this stupid horse!

Pondering on the thought of "you WILL give it to me," I ALREADY have it as you were born to function for one particular purpose and that is to surrender your worthless manhood of servitude to me. You know nothing else than to be what you truly are.

Jasmin shows her feet in black high-heels and then tells the slave to lick her feet and legs in black nylons. Alex licks her sweaty feet and sucks her toes. Jasmin loves to see and feel how slave worship her stinky feet. When the slave is finished with both feet, Jasmin tells Alex to lie down on the floor. Then she push her feet inside the slave's mouth as deep as she can. Alex coughs when Jasmin's toes gags his mouth. But Jasmin loves it an continues the slave's torment.

It is summers and Lea nevertheless was away with boots outside; The result gets to feel Richie: Deadening stinking feet. He motionlessly lies on the ground, takes off their boots as Lea and she slowly then draws over the nose for him so that he already gets a foretaste on the smell of the feet; She then seals her mouth for him with an adhesive tape, so that he only is concentrated on "smelling"; And Lea already presses her naked foot for him on the nose; Richie has to inhale the salty smell - no nuance may be lost; It also lays out him the other boot and makes him sniff at it tightly on the nose at the end. 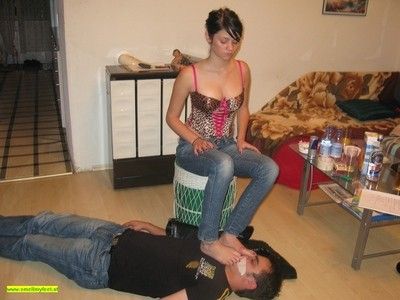 This is your never ending destiny as I loop your entire life into my labyrinth of mind fuck destruction. This is the Black FemdomISM way! You submit willingly and wholeheartedly by the power of my supreme black latex and the power it has over you. Prepare for these heels to crush you.

Melady comes home and complains first time with its slave Richie, he buy its too little money for this this has given; It can himself innumerable insults, insults and verbal humiliations listened first; Melady then orders it to kneel down and its feet kiss, to smell and to leak cleanly; Richie immediately goes completely intimidated on the knees and pulls out it one of her casual shoes; And Melady already orders him to smell the shoe; You opens had all day long clearly to him it had what for effects on their feet, socks and shoes this to run them through the town; Hers already completely must of the sweat of the hours Richie wet smell and lick socks and feet; It must himself because of their order, with their socks bathed in sweat completely wipe its face and then the sweat between their toes out leaky. 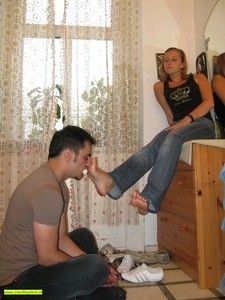 What a filthy piece of scum this retarded creature is. I train him as my personal toilet and coerce him to eat the toilet paper that i wipe my ass with!

You only have eyes for my beautiful, long legs. Am I right? You can't get enough, admiring them from all angles with my hot leather high heels driving you crazy as well. The sound they make when I squeeze my high heels together makes you so horny that you can't take it any longer. Just look at how high the heels are! They make my endless legs look even longer. But I know exactly what you REALLY want. You want to lay below me and admire my sexy legs and shoes from there, because this is the best angle. Let's go then, lay down on the floor!

Lady B and Christin crushes Antipasti under her plateau Thongs. First both Girls spit on the Antipasti and walk over. Tis very slippery under her Flip-Flops. The Girls slide on the Floor.