Time for a comfy smoking break after I?ve fucked your asshole several times today. Of course I?ve got another task for you to calm down, because I?ve notived so much dirt and dust on my boots and I really can?t accept that! So move your flannel and clean my boots devotedly with your tongue until they shine like they?re new again! I demand your highest commitment and I don?t wanna wait the whole day, so get stuck into your work and prove to me if you?re a good bootlicker, slave! I wanna see your devotion by cleaning my boots from all the dirt under my soles and on the lace.

As our slave you'll serve as our foot licker! You're kneeling in front of us 3 ladies and lick our soles clean. In the meantime we'll make fun of you and choose a new name for you. You'll lick all the dirt from our shoes!

Vialika wants to train her slave to hold his breath for a longer time. She sits on his chest and belly on her knees to make his training tough. Vialika plays with Alex's breath. She hold his nose and mouth with her hands until the face of her slave became red and then release it. But not both hands at the same time, it's too easy for Alex. So every time Vialika decides to release only his mouth or even only nose. When Vialika make long holdings and then release only Alex's nose she saw that his breath is so tough and fast and she loves it. Sometimes she make a short breaks and slave got only a few moments to catch a breath before next holdings. Finally Vialika put her sweaty and stinky shoe on the Alex's face and tells him to ventilate it. It's very good time for it, because the slave's breath is fast and deep, so Vialika ventilates her shoes fast.

My cleaning maid was there to work and was allowed to clean the whole house first. As I prepare for the meeting with my lover or friend, put on make-up and chic, the idiot scrubs the floor. My girlfriend comes spontaneously to visit and we have fun over the jerk. She asks if she could have lent him some time. Of course, that's what sluts are there for, that they can get around. Today is a special day. Because my friend wants to meet my slave. He meets immediately with a real Alpha Man. Licking our feet during sex and drinking his sperm after he has to give him a blowjob. In between, I shit in his mouth and urge him to swallow everything. After all, my friend has to go shit right away!

Not a word. Not a look. Not even a glance. No flip off.No Loser sign.Nothing.I ignore you because thats the only treatment you deserve right now. You do not exist in my world right now.

This was Gina's first foot humiliation experience. While I licked her shoes she either ignored me, took selfies, or gave me weird 'eww' looks as I 'worked'. Her shoes were filthy and tasted of p** and sh** I could barely hold my tongue out from the smell. They are the shoes she wears to work every night, and she even said the washroom floor at the bar she works in the ladies room is disgustingly dirty. Here I am poking my tongue against them 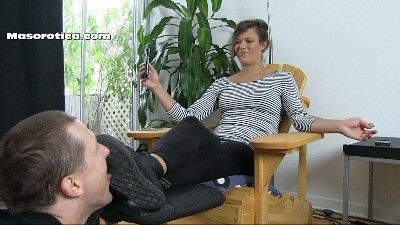 Today, I want to have some fun with my slave. I'm going to use his face as my personal cusion. With a tight stocking mask over his head, I then bind his arms and legs in the sling. He can't escape, and is in the perfect position what I have in mind. I begin with some facesitting, as I place my beautiful ass over his face I so enjoy hearing his gasps for air. I can actually change his tone by changing the pressure with my weight. What a great way to exercise don't you think? I change position and give my bitch the luxury of some breathtaking pussy smother tight in his face. His muffled gasps getting more frequent, as I press down harder and harder. My bitch is running out of steam, he can't seem to catch his breath. What a shame he is such a good cusion. So for now, I'll leave him with my soiled panties over head, and allow him to breathe in my beautiful scent...

Just been horse riding with the Girls, and it's your time to lick My boots clean. you're trash and I'm going treat you like pure garbage. Lick My boots spotlessly clean and shiny, and as a treat you can eat My used chewing gum and lick up My spit along with the shit on My boots. ORDER your CUSTOM MADE CLIP NOW slave!

Brooke really seems to enjoy making fun at this loser slave all the time, so that was just another perfect occasion to do it after another long day with her precious feet inside her shoes! She just wanted to give him a hard time, so she calls him in the room, and makes him bow down on his knees. She makes him take her shoes off, then immediately covers his face with her sweaty nylon socks! They were so gross and so sweaty, but she just makes fun at him, and rubs them all over his face! She even makes him lick the sweaty bottom of her socks! Brooke also needs to give some fresh air to her feet, so she makes him take her socks off with his teeth, and smothers his face again with her sweaty naked feet! She makes him take some deep breaths in her feet, and makes him lick the sweaty bottom of her soles! She also takes pleasure to make him lick and clean all the dirt, right in between each of her toes! That was a very intense foot worship session!

Opening the door to the sound of knocking, this man is greeted with the sight of uniformed schoolgirls. He has no idea what they want, but before he could ask, they push their way inside his living room! Without further ado, one of them lifts up her skirt and pisses inside a glass! As soon as she is finished, she hands it over to the guy and make him gulp down every single drop of it! Once he is done, an apparatus is attached on his mouth, rendering it stretched wide open! He is then laid down on the floor where things get more interesting! Without mercy, the ladies take turns pissing inside his gaping hole, leaving him with no choice but to swallow mouthful after mouthful! Though, things didnÂt end there! The culprits later strip the victim of his clothes, rendering him completely naked! By then, they would alternately feed him with pussy as well as urinate all over him! For their finale, they insert a makeshift funnel inside his mouth and then release every drop of piss they can into it!

95994 - Morning turd sniffing toilet paper and my asshole is burning

I enter the bathroom cause I have the urge to poop. My asshole is full. A turd comes out slowly from my asshole, what a relief! I feel there could be more shit inside so I push again. I ate a lot of hot red pepper paste in the last 2 days and my asshole is burning a lot. You can see the pain on my face. There was also a lot of tiny pieces of hot red pepper stuck in my poop. I start wiping my ass, look at my dirty toilet papers and sniff them. Yuck! I take the camera to show you the inside of the toilet bowl, my dirty toilet paper and then show you my dirty asshole. I wipe my ass again, stand up and flush the toilet.

You're such a loser, not only getting off on being humiliated and used - but you're even paying me for it! Ridiculous! Anyway, stay on your knees and give me some cash. Really?! Just 150 Euro!? Come on loser, you can do better! What will I do with your hard-earned money?! Come on, give me some more ... oh, how I love green bills! And now open your mouth to be my human ashtray! Swallow it all, slave! But you keep staring at my sexy high heels ... so you're going to pay for that as well! Ah, another 100 Euros, nice! Let me rest my heel on your face ... this way you can take a very close up look at them :-D And open wide again ... you'll swallow all the ash and of course I'll put out the cigarette on your tongue and you'll swallow the cigarette butt in the end as well! And maybe - if you're lucky - you'll receive some of my divine spit in between as well! This is a non-exclusive custom clip for a fan. If you want me to do a custom clip for you contact me at marissa@madamemarissa.com!

I ordered one of my fans to send me some of his valuable watches - of course he knew he was not going to get them back - but I'd bet he didn't expect THIS! I put the watch on my hiking boots and then go for a walk in the woods. The glass breaks quickly as I step on the hard paths again and again - but the surprisingly the watch is still working for a short time without the glass. I walk through some muddy puddles, walk over a few logs and jump from the logs to the ground. After the strap broke I finish the video by ripping the watch completely apart and grinding it into the pavement :-)

I want to have some fun - and of course fun means a truckload of pain for the slave! I pull him into the living room on a leash and order him to get up on his knees in front of me - then unleash a merciless rain of slaps on his face! My hands hit his face relentlessly - again and again - and faster and faster! The slave is suffering immensely - but like a good trained slave he takes it - endures the burning pain in his cheeks to please his mistress! 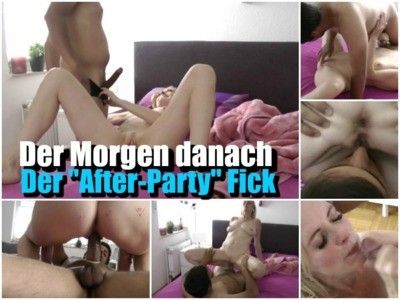 Sasha decides to milk ponyboy like a cow. He stands on all fourth and the process starts.She spanks him sometimes and in the end he couldn't resist anymore and cummed.

I call for the slave and order him to kiss my sexy high heels - and then lick them clean as well of course. But today he'll not only worship my sexy shoes - he'll also pamper my feet. The nylons are quite moist and smelly - and after kissing them all over he has to massage them. I was out dancing on the weekend and my foot muscles are still tense - and obviously there's no better cure for that than a good long foot massage!

You really want to see Lady Levana's hot jeans ass - don't you?! Her jeans are so tight, so sexy! She strokes sexy her ass - you'd like to do that too, wouldn't you? Worship her ass, kiss her ass! Come on... do it!

Lady B gets a electrical excavator from a User. She sit on it and play with him. The toy is very stable. Now coming Christin and both Girls play now with the excavator. Crush him under Boots, is the name of her game.At the end is the toy only trash.

Sexy Miss Serena wants her new slave to sniff her stinky sneakers and she wants him to clean the dirty soles of her shoes. With his worthless tongue he has to clean the whole profile of her shoes. After that Miss Serena wants to relax and to check social media accounts while her new footslave has to sniff and to worship her bare sexy soles and toes after removing her dirty, sweaty socks ...