UGG boots, most of all men that I know hate them ? they aren't sexy but you, you love them! Since you aren't a man, that isn't a big surprise to me! They are super comfy, warm and bring my feet to sweat, they also have this special feature that you have to wear them barefoot. Of course, this is the biggest turn on for a foot bitch like you, and that's why it makes you so insane when you see that I wear UGG boots. The agonizing question of whether my naked feet could come to light or not makes you mad. But hey, today I am nice, and you can admire my bare feet ...

I just got back from riding - now let's see what's more comfortable to sit on - a saddle or your face? Oh, poor guy ... does it hurt your nose when I sit on your face? Like I'd care! You're going to be smothered under my sexy ass - and you'll endure it! You're not really good for anything anyway - so why not use your face as a seatpad for my gorgeous ass?! And beside the fun - it's really quite comfortable - finally something you're remotely good at - providing your face as a seat for your mistress!

ItÃ¢ÂÂs time to get in the spirit of giving...by giving it ALL to your Goddess. You canÃ¢ÂÂt get enough of the way I sweetly flirt and seduce you out of your money. Follow through with this series and my instructions, and IÃ¢ÂÂll have you broke and happy by the end of the year.

For three women, this is just a normal public restroom where they are relieving themselves, but little do they know that hidden in one of the corners is a camera and is recording every move they make! From taking off their panties, to squatting on the floor, to releasing a strong stream of piss!

I just got back from riding - now let's see what's more comfortable to sit on - a saddle or your face? Oh, poor guy ... does it hurt your nose when I sit on your face? Like I'd care! You're going to be smothered under my sexy ass - and you'll endure it! You're not really good for anything anyway - so why not use your face as a seatpad for my gorgeous ass?! And beside the fun - it's really quite comfortable - finally something you're remotely good at - providing your face as a seat for your mistress!

Your wife Anička is quietly reading on the sofa, playing with her shoes, dangling them on her sexy feet. She notices you starring at her feet again, like you do when you're hungry for her soles and toes. She plays with you a little teasing you with her feet and dangling of her shoes until you're down there sitting on the floor at her feet. She likes to overpower softly like this with her feet which can that control you completely. She encourages you to come closer and to massage and worship her soles and smell her perfect feet. Her soles are so soft and you just want to kiss them and lick them all over. She offers you a salty crackers to eat but while you're reaching for it with your hand she moves back and tells you she will feed you her self. Only not using her hands but her feet and toes... 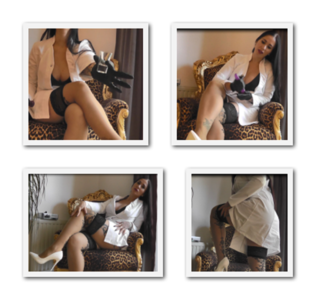 Now I'll bite the slave's fingers - one after another - to concentrate my biting power on each finger! Sometimes I use my sharp front teeth, sometimes the pointy canine teeth and sometimes the grinding power of my back teeth. I enjoy seeing the slave's face distorted in pain - while you get to enjoy a close up of the vicious bites! This is a non-exclusive custom clip for a fan. If you want me to do a custom clip for you contact me at marissa@madamemarissa.com!

A sexy and hot Alien Giantess lands on Earth, destroys a highway and lots of vehicles and people with her pee. She then takes a number of cars and buses with her as well as dozens of hostages. Gets back at her home and starts playing kinky, naughty and dangerous games with them! Watch that super hot giantess crashing cars and buses with her feet, pussy, tits and ass, flooding them with her pussy juices - a real massacre! 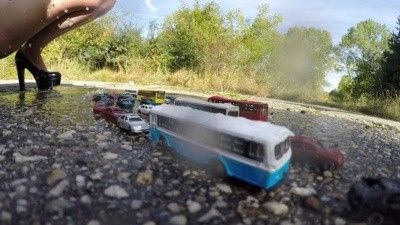 Today I'm with my beautiful Mistress friend in Milan, and we are going to relax with a couple of slaves. However, I was reading that a good way for us girls to keep our legs in condition is to practice tightening and relaxing our thigh muscles. So we decided to give it a go. What better way to test if we are having results, is to use the necks of our slaves. We get them to sit at our feet on the floor and make their necks available. We quickly wrap out thighs around their scrawny necks and begin to apply the pressure. At first it's just a bit of exercise. However, as or slaves begin to choke, we decided to really enjoy ourselves. So we continue to tighten our grip until the faces of our bitches begin to turn a nice shade of purple as they desperatly gasp for air. I place my hands over my slaves face to make sure he can't make too much noise, also I don't want him to be able to breathe too much. Our exercise is proving to be a great way to stay in shape. It's also a terrific way to have some fun as we crush the necks of our slaves with our breathtaking scissorholds...

My client likes wool, especially mohair. As a surprise, I did not just brought my little Mohair slave, but also a nice toy. Since he is always complaining about his teeth on his cock, I have something nice which will end this missery immediately. A mouth pussy! Since the teeth are spread wide apartand the cock just need to push into the soft pussy whole and feel the tongue of the slave, it will feel much much better. The beautiful mohair fabric makes him endlessly horny and his full load of sperm spreads all over the face of my Mohair. My sneering laugh at this sight, was worth it, right?

During the entire duration of this coupleÂs relationship, the woman does not give in to the demand of the man of quenching his poop fetish! When he could no longer handle his ravaging urges, he finally decides to make her do it! During her most vulnerable, he grabs her, restrains her with rope, and then lays her down on a bed in their basement where nobody can hear her! After which, he serves his dick inside her mouth and thrusts it back and forth! Eventually, he stops, but only to give the sweetheart a massive enema! When he is done injecting her asshole with fluid, he resumes with pushing his cock deep down her throat! It doesnÂt take long before the effects of the enema sets in on the lady and she starts squirting stream after stream of feces while he continues having her suck his cock! The only time he stops is after he reaches orgasm, and by then, he releases his load all over the womanÂs face!

My son very rude. Mom must punish him. He gets spanked in the face and ass. I sit on his face rubbing pussy for his nose, mouth. Oh, you naughty boy, you lick, we have a pussy and smell mommyÂs dirty ass. A naughty son must suffer a greater punishment. Mama peeing and shitting at you. Enjoy your meal naughty boy.

Oh I love to use foot addicted freaks like you. It is so pretty simple to manipulate you and make you do everything I demand by abusing your pathetic weakness for feet and their delicious smell. What any normal guy would deny is actually more than good enough to be accepted by you. Holding stinky gym shoes right in your face makes you go crazy and taking them off to show you my stinky blue socks makes you get a boner in your pants. That is so disgusting to me but I?m very happy about the fact that guys like you exist. Who else would make a better and more obedient submissive butler than you? You are born for this, born to smell the foot stink, born to inhale it, to get hard on it and of course to pay for that pathetic privilege.

Get down on all fours - Sveta wants to ride on your back. For Svetlana her husband is only to be used. He is used to have fun and he can be humiliated at the same time. This loser is made Sveta's pony and she rides him. If he can take it any longer? That's not her problem - keep on walking pony! He is expected to be ridden in different ways in the next parts. Young lady with great butt!