This slave wants to try the excitement to be the toilet of two Mistresses. My friend Gaia and me decide to use it for our scat and pee. We order him to lay down and stay with the mouth open, so he can take everything. Mistress Gaia starts, giving him some shit. Then it's my turn. And we go on in this way, alternating. Small pieces of shit so the toilet can taste that special gift before swallowing it. Some spit too, and at the end lots of pee. The smell, the view of our asses and pussies, the taste... Our wc man is so excited that he cannot hold back and cums.

If you love hard belly punching, kicking and stomping, well, in this extreme video - here in the full version at a special price - youÂll find bread for your teeth! The first part is focused on belly punching. Do you like human punching bag scenarios? Have you a strong fetish about female fighters, boxing gloves and hard belly punches? Well, this is definitely the video for you! This clip was made as a result of the collaboration with a real fakir (able to push his limits beyond the imaginable) and three bad girls totally indifferent to the suffering of their human punching bag. A well-equipped dungeon in Milan has been transformed into a real boxing club, in which Era, a former professional female boxer (years and years of fighting behind her!) tries to teach what is the correct way to throw a powerful punch to the midsection. The beginners are Lily Dupont and Misia Marelli. two sadistic mistresses who need a boxing lesson, Âcause many italian masochists want to be punished by them, in a very cruel way, with hard body blows. So, the fighter Era shows her terrific punching techniques, using Fakir as sparring partnerÂ in fact, only the best artist of the Freak Circus - well known in Italy for his inhuman skills to take pain - can withstand such a long series of body shots without collapsing. Punches, punches and more punches again as if there's no tomorrow! The second part is focused on hard kicking. Do you like watching a man kicked full power in the stomach by three sadistic female fighters? Realism is what differentiates our clipstore from other similar productions: at the end of this tremendous beatdown session the fakirÂs belly will be red and sore! Mistress Era practiced both muay thai and karate... since Era thinks that front kicks are easiest to teach (to her beginners Lily Dupont and Misia Marelli) and most painful to take (for the human kicking bag), she starts from those. The front kick, called Mae Geri in japanese, is certainly the main kick in traditional karate of all styles. It is a very strong and fast strike, able to produce serious damage to the internal organs, Can the fakir survive? In the third part, we welcome you to StompLand, the magic land in which dreams - if you are extreme masochist - come true! Three female fighters - Era, Lily Dupont e Misia Marelli again - want to test in the most cruel way the tolerance for pain of Fakir. The abs-test is focused on hard stomping. As you all know, stomp kicks are thrown at opponents who are lying prone in front of youÂ obviously, it is a very dangerous blow, Âcause the stomper can add the weight of the legs to the speed of a kick, Common people canÂt withstand a long series of stomp kicks without collapsing, but Fakir is something special: what it would be Hell for everyone, it is pure Heaven for him, who will experience the timelessness of a traditional grape stompÂ directly on his stomach (ouch!), not in beatiful vineyards, but in a dungeon transformed just for you in StompLand.

As some have realized, Flo has had to take the stick a lot in the past. The fact that I have also made a video about it has apparently put him in such a rage that the poor thing was actually rebellious and now presses charge against me. Why exactly how, where, what, etc., everyone can learn. Dear Flo, you also buy this video if you want to hear my answer ....

Haha! It's absolutely shameful how you assume that your little stump could be a real dick! No way! I laugh at you and tell you how bad things really are for you. You don't have a dick. You're dickless and desperate! My ass makes you wild, but your cock remains just a rotten, useless piece of meat!

It is Diego who sacrificed his favorite toy here. He wants to experience how Mila maltreats it with her Kiara wedge sandals and destroys it forever. The tank is trapped under Mila's cruel heel like a hostage. There is no escape and no rescue

Harley Quinn is going to tease you during locktober !She have your keys and you stay locked away till the end of the month ! Chastity is the right thing for you loser !But I didn't say it would be easy for you ! Perhaps Harley swallow your keys ! Perhaps she isn't in the mood to search them ! You can watch her spitting on your cage !

| *BP exclusive* | Lacey has amazing feet and in this clip you can see her perfect red painted toes while she spreads her legs and shits a nice pile of poop. Great view of her boobs and pussy. And don't forget to hear her moans with her super sexy voice! [2:10 mins]

Goddess Vanny's foot slave must do exactly what his mistress orders him to do, so he kisses her high heels all over. Of course, that includes the soles, too. For this he bends his head down while Goddess Vanny watches him from above in amusement. He sucks on the toes of her shoes, exactly the way she wants. Finally she lets him smell and suck on her stinky nylon feet!

I don't have much time this morning and I really need to take a big shit! My slave is waiting for his breakfast as usually and I will serve it directly in his mouth! I have a stormy diarrhoea! My asshole are filthy after that, next time I will make him clean it with his tongue. He is a slave for everything - doormat, toilet, toilet paper and shit eater!

You are really the lowest loser of all, you dream of eating my sht. I tell you stright in your shteater face what i think about you and what you will have to do for me and all my friends.

I want to make the slave really suffer today once again - by crushing every one of his fingers! I've put on my new LaSportiva approach shoes for that, they may look like sneakers, but they're more like hiking shoes - with a deep tread and a very hard sole - perfect to make the slave feel like his fingers are squished in a vice :-D I did a lot of workouts recently and spent almost a month hiking - so I've gained some muscles and when I step on the scale my weight including shoes and clothes is almost 67kg / 147 lbs - let's try out if the slave notices the 5kg difference! I get on the desk and order him to put his hands on the edge. First, I'll trample his hands and see if my shoes leave nice marks under my weight! Then he has to present one finger at a time, and I step on each of his fingers with my full weight ... he's screaming in pain as my weight flattens his fingers and I continue to try out different parts of the shoe sole - comparing the marks they leave behind on his fingers and I enjoy as the slave begs for mercy and kisses my shoe sole while his finger gets crushed under my other shoe! His hands are shaking from the pain and he's almost crying, but I won't stop until all of his fingers are marked by my shoes!

It is a spontaneous POV recording how Mila destroys the smartphone of her slave in the real education lesson. He kneels on the floor and cannot call anyone and ask for help. He suffers terribly, but he has to accept the punishment

ITALIAN SPEAKINGToday I am struggling with one of my students to whom I am teaching revision lessons. However, for some days he has always been stuck on the same exercise. He just fails to understand how it should be done. I realized that every time he sees me, he gets distracted and doesn't focus on my explanations and stares at my feet. Today I want to have confirmation of all this. As soon as I enter the classroom he pretends to read in his notebook, but in reality he is only staring at my feet. As soon as I I approach his desk I realize that he is excited. When I confront him, he tries to deny it. However, I have found out and I make him confess his fetish for my feet. I tell him that he must get gets more serious about studying. I then make him lie down at my feet, and allow him to masturbate. Obviously this kind concession will have a high price to pay. In fact, I will deny giving him permission to undress. After a few minutes of the loser touching himself, a rush of sperm comes out of his little cock, and ends up all over his shirt. So I order him to get dressed without being able to clean himself, in this way when his classmates return to the classroom they will understand that in the class they have a Teacher Fetish Wanker...

I went with a friend in the forest. There are growing nettles. I want to caress your body with nettles. I take my clothes off completely. My friend caresses my groote, stomach, back, legs, ass and pussy with nettles. It gives me great pleasure 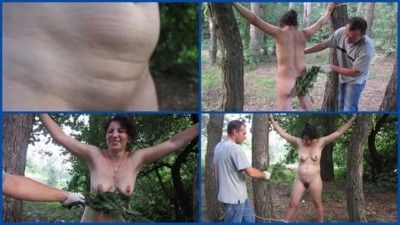 My juicy gay boy...finally time to swallow your first real throat full isn't it?! Blindfolded and teased into submission before I encourage you to open wide and take my friend's big black cock deep into your whore hole. That first taste. That first delicious suck. You are hooked on it now and there is no looking back.

Nasty shit for toilet slave is very deliciuos food. I have a more more tasty shit and it was right on your nose, all in your face. Slave must lick the shit off his face, so that it flowed into the mouth. I like when a slave eats my shit. Ha-ha