Bizarr Lady Jessica gets his meal slave bobby of his mistress served: Of course as always on her feet. Toast and cheese stand on the foot menu today. Bobby eats the toast of her feet, licks the cheese parts between her toes out. EmentalerkÃ¤se on foot cheese! It finally still must eat the remaininging bits of the ground.

I've put the slave's head in a cardboard box and show him the dirty stinky socks I've been wearing for the last couple of days ... but these won't be the worst to come! I've brought along a laundry bag - filled with tons of worn socks, nylons and pantyhose - all nicely drenched in my foot sweat and smelly! I take them out of the bag one after another and let them drop on the loser's face ... until his whole face is covered and enclosed in stinky socks! I rub them all over his face and order him to breathe only through his nose - and when I notice that he tries to breathe through his mouth ... I simply grab a roll of duct tape and tape it shut! He can't escape the smell of my workout socks, office nylons, riding socks, sneaker socks and all the other pairs - and to make it even worse for him - in the end I close the box and tape it as well. He'll spend the next hours completely engulfed in my stinky footwear - while I use the box as a foot stool to make sure he doesn't try to escape!

And here is now for our shit-eater it is time another tests... I decided to rein the lesson, he lick my asshole deep with his tongue. Mmm, it feel so good. And he lick my dirty feet. Then I dragged him to the toilet. He's in for a little surprise of two bbw mistresses! A big, smelly pile of shit, and he'll eat right out of the source! We will not use the toilet, we will use his mouth. Ha-ha... Rising over him I kicking shit in his mouth and making him eat stinky shit, I finally broke it! He scooped up the shit with his hands and ate all. Now it's his place! Now this schmuck and the toilet maggot are our toilet forever!

Cassandra likes to surprise me all the time with her new crazy ideas, and she also likes to humiliate me with her feet all the time, so it seems like this one here is kind of special! She has been wearing the same pair of juicy kitty grey socks for about four days now, so she thought it could be nice to do something really special with them! We were both talking about drinking a nice cup of tea, so she told me that she have a brand new recipe that she would love to make me discover, but she doesnÂt want me to know anything about her secret! I had to get out of the room, and close the door, so she could prepare her brand new tea recipe for me, right in front of you guys! She is talking to you about that crazy recipe, then she takes her sneakers off to show you her sweaty grey socks! They look so sweaty, and so moist! I am pretty sure that the smell of her socks was probably really strong! She had some boiling water on the side, so she drops some of that hot water in both cups, but it seems like the recipe was different for both cups! She puts a nice tea bag on her cup, then she takes her socks off to soak them in the other cup of hot water! This is so cruel! She is talking her time, just to make sure that all of her sweat is well mixing on that hot water, then hides everything around to make sure I do not know about her sweaty socks tea recipe! Cassandra calls me back in the room, so she said that she is more then ready to let me taste her secret tea recipe! I really had no idea at this time, what I was about to drink, but it seems like she really makes fun at it! She puts both cups right in front of us, so I could see at this time that my tea was a bit different! We made a cheers, then I had my first sip of Cassandra sweaty socks tea! I must admit that it was kind of tasty at this time, but the taste was a little weird! She was smiling, and probably laughing inside her watching me drinking her sweaty socks tea, but I would never blame her for doing this, since she is for sure one of my favorite Dreamgirl! She was drinking her tea, and I was drinking mine, and I have to say that the taste was really good after a few sips! I could see that there was a few herbs in the bottom of the cup, so I was trying to film it with my phone. It seems like it was finally some of that dirt from her feet! i canÂt believe that she actually made me drink that sweaty socks tea, with her cruel smile of satisfaction on top of that! I had to drink it all, before she told me about what this was all about! There is also an extended version of this clip, with an uncut version at the end, so you could see it from the beginning to the end without any other camera angle! This was such a crazy thing to do Cassandra! I just canÂt believe you did it to me!

Your girlfriend just returned from her night shift at work and she's really tired. Running on her feet all day and night in a bar in those sneakers, her feet hurt and oh my god the smell...She just fells on the sofa and barely having her eyes opened she ask you to rub her feet. "I know they smell but they also really hurt...please, pretty please would you rub them for me? You can take those socks off if you want.". You being a good boyfriend would do this for her. Wouldn't you?

ITALIAN SPEAKINGI stalked this bitch for days, waiting for the right time to capture her... Once I found her location and burst open the door, I enter into the kitchen and I surprise her by immediately covering her mouth to prevent her screams for help. I waste little time as she succumbs to me opening her legs, and I start to fuck her like the whore that she is. Finally, with the total penetration of my hand, I have her pussy dripping for my pleasure...

Your secret is out. Well, most of your secrets are out. Not only do you have an itty bitty wittle clitty, but you're also a dirty panty pervert! Oh you know this is fodder for me to humiliate you. I'm going to have so much fun. So get your tiny pee pee out, get those dirty panties and entertain me, weakling!

Goddess Ria has been a busy worker!! Enjoy as she takes a quick five minute break to get load off her work day! Or should I say out of it!! Speaking of out, enjoy as she drops trou and spreads and pushes out her phat logs into the bowl nice and up close!! This sexy PAWG always gets the job done!!

Violet is having a lazy day at home with her best-friend who has been staying over a lot! The two of them are watching a movie and Jimmy saw the perfect opportunity to get some shots of their feet under the table. He sets up the camera and then asks Violet if she needs any thing washed in the laundry! BOTH GIRLS STRIP OFF THEIR SOCKS ON CAMERA, CANDID AND THEN MODEL THEIR BARE FEET!Jimmy moves the camera around under the table, trying to get the best candid shots of their Stinky! Smelly! College Girl Feet! 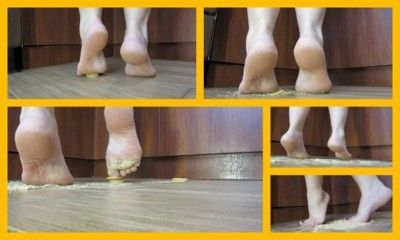 We introduce Lady Chelsea, an amazing tall beauty with superbody, perfect ass and sexy big feet! Chelsea is the best friend of Lady Monika and they go to the college together. Finally, Monika convinced her to have some femdom fun with her and she really enjoyed it! As Monika says to Chelsea all the time, this is a second college!Monika calls Chelsea to show her another use of their slave! She sits on his face and she smothers him under her jeans, while Chelsea sits on his body. They laugh and change positions on the slave, smothering him under their perfect asses. Soon Monika gets dominant and starts to punch and trample the body of the slave, while Chelsea sits on his face and laughs. She follows the example of her girlfriend and the last minutes are a cruel facesitting domination party!

ENGLISH SPEAKINGToday I want you to kneel before me, you are my slave and you will do exactly as I say. Disobedience is not an option. I am going to enjoy a cigarette, and you will be my ashtray I needed. If you behave, I will allow you to touch your cock, as I know you will have a throbber while you kneel beneath me. When it's time, I will tell you to masturbate to my countdown. Like the little wimp that you are, you can't help yourself. When finished, you will kiss my beautiful feet and worship my dominant elegance...

CANDICE IS OFFERED A $500 BONUS IF SHE SUCCEEDS IN MAKING WALTER TAP-OUT OR PASS-OUT! SHE MUMMIFIES HIM IN SHEETS FROM HEAD TO TOE, DUCK TAPES HIS ANKLES, ARMS AND CHEST, NECK, AND EVEN MOUTH JUST TO MAKE SURE HE WON'T BACK OUT OR CHANGE HIS MIND AT THE LAST MINUTE! THERE IS NO ESCAPE! WE KNOW HE'LL REGRET HIS WORDS ONCE IT BEGINS, BUT IT'LL BE TOO LATE TO STOP HER! SHE WANTS HER BONUS, AND SHE'LL STOP AT NOTHING TO GET IT!BE SURE TO CONTINUE WATCHING AFTER THE CREDITS FOR EXTRA FOOTAGE OF THE AFTERMATH!

13893 - Laced up and teased in nylon jacket and bare feet

He can't move and Lady Karame has fun sitting on him and letting her scent of feet pour into his nose. Her pink latex trousers with their gorgeous ass let them down on his face with relish. The gray Nickolson jacket drives the fetish lover out of his mind.

Today, a warm day, I became very bored of sitting at home and I decided to go to the lake. Arriving at the lake, I enjoyed the natural beauty. Then I wanted to hoot, I began to piss thoughtlessly. I poured grass with a golden stream. After a while I wanted to squeeze the shit out of me, and it gently began to come out of my hole. It came out and wanted to get right into your mouth. When I squeezed out this shit there was a divine aroma. And would you like to try this taste and aroma?

The slave can do absolutely nothing if I sit down with my jeans ass on his face. His head is stuck in this box for this purpose. It's simply perfect for torturing him with hard facesitting. How long will he be able to sit under my hot ass with no air?! I'll test it, controlling his air supply with my jeans ass. I alone control his breathing and he is now learning to give up control of his life to me.