Princess Natalie relaxing on her slave in her sexy dress. She sits full weight and crosses her legs over to add more weight. Later on she turns around and pulls her dress up and continues smothering him with her bare sweaty ass. Watch as this secretary enjoys suffocating her pathetic slave ;)

We have the gorgeous asian Mistress Patricia today. She looks hot dressed in black latex leggings and wearing her black high heeled pointy toe boots. The slave is on the floor totally naked of course with his hands tied up to the chair. Such a beautiful position for Miss Patricia. He is so vulnerable like that.The trampling starts straight from the beginning. Miss Patricia has fun while the slave is suffering beneath her sharp high heels. You can see very well the smile on her face most of the time during the clip. The trampling is on the slave's front the entire clip including his chest, his stomach and his penis a couple of times. The slave is not very quiet during the clip. He moans a lot. Obviously the pain is too much for him, but Miss Patricia just keep herself busy with the trampling. She doesn't talk a lot during the clip and also she uses the actual real floor from time to time. There are also a few small jumps. Also Miss Patricia steps on the slave's head a few times but not with her full weight.

Nicole likes it when her slaves meet her .. mila knows this and faithfully waited for her Mistress until she returned from a walk. When Nicole came in, the slave girl immediately began kissing her shoes .. After which Nicole ordered her to lick her bare feet.

It has been a while since this woman and her boyfriend have been together! Despite it, there are still a lot that he doesnÂt know about her, and that includes her pee fetish! In this situation, she exposes that to him by peeing inside a glass! She fills it up to the brim and then hands it over to the guy, who at first hesitates! However, realizing that there is no escaping out of it, he pours everything inside his mouth and down his throat, gulping down in the process! He makes sure to leave not even a single drop behind, leading to a completely clean and empty glass!

Weeeeerreeee Back!! New year Same ole FUNK, just now in 4k!! Lol Ladies Keeping It Funky is back with one of our OG FUNKY Ladies in Melissa!! Enjoy as she spreads and pushes out some phat logs from that extra phat ass of her's!!

Nicole's pantyhose sweated enough today, but it's good that mila was there. Nicole ordered her to thoroughly lick her pantyhose and then her bare feet.

In this video, Tatiana appears completely naked in the frame. Actions take place on the bathroom floor. Tatiana appears in the frame, picks up oil and smears her freshly washed hair. She attaches and spreads her knees wide. Her boobs are so big and saggy and her belly folds are so sexy. She is a fat woman. After stroking her body a little, Tatyana kneels down and moves closer to the camera, biting her lip. She kneels down and starts stroking her body again. Big boobs come across in her hands and she begins to crush them in her palms. Tatyana again changes her position and applies herself. Her labia opens wide when she spreads her legs and her pussy becomes clearly visible. Then she gets up and bends her torso a little and you can see her big ass in the frame. Tatiana turns her back to the camera and spreads her legs. The soil begins to flow from her pussy, the spray spills in different directions. The feet immediately feel the warmth below, and the smell begins to spread throughout the room. Tatiana sat down, dropped her hands to the floor and continued to piss. After Tatyana pee, she began to push and squeeze the shit out of herself. Shit started popping out of her hole in little balls. She took a shit on a napkin. After that, she got up and squeezed her ass, immediately it became visible cellulite on her body. Tatiana turned to face the camera and sat down again, her hands immediately reached for the pussy and she began to masturbate her pussy, and the rest of the shit began to come out of her ass. After Tatyana finally stopped shitting, she got up and went to adjust the camera so that it was better to see what she was going to do next. And then Tatyana approaches her pile of shit, she becomes feet in her shit and urine, Tatyana immediately feels warmth on her feet, and the pungent smell of stinking shit immediately hits her nose. She gets into shit, then shows her dirty foot, and does the same with the other foot. After that, Tatyana also sits down on the floor with her big and bare ass. He puts his hands under his knees and raises both feet closer to the camera. And he does this several times, lowers him into shit and lifts him up. Her toes on her feet were covered in shit, the same shit passed through her toes, and the picture is beautiful. Tatiana gets up but her feet and begins to trample her shit into the napkin, or the shit begins to soak into her skin on her feet, this is no longer known. She turns her ass to the camera and her big ass appears in the camera in close-up. When she bent down, her buns parted and immediately became visible to her dirty hole and in the ass. Tatiana begins to change poses. She sits down again and spreads her legs, a pile of shit smeared under her. Then he gets up and continues to stomp his shit. At the end of the video, Tatiana says goodbye to you and turns off the camera.

If these stupid whores think that we have had enough of them already and let them go, then they are deeply mistaken .. we want more fun. Let's see which of these idiots is tighter .. We ordered them to lie flat on the floor and wanted to jump on them like on a trampoline. Have you ever jumped on a trampoline? It was really very funny! To be honest these two bitches turned out to be pretty strong, we loved it. They lie at our feet like worms and pray that we stop. They were lucky that it was a rather energy-consuming activity and we allowed them to worship our feet. We stand and look down at them .. haha, a pathetic sight. Worms .. I canÂt name them otherwise .. We decided to take a little rest, sat down on the sofa and put our feet on one of the whores, and ordered the other to worship our feet. I think we had a lot of fun today. (2 PART of 2)..Sarah..

Another clip from our crushing series called 'Crushing for Fun' where beautiful and dominant mistresses crush food for pleasure. We have the gorgeous latin beauty Goddess Joanna again today. She looks so stunning. Dressed in leather from head to toe this time wearing her black leather dress along with red leather pointy toe high heeled boots she will be crushing and smashing some fruits called 'Mora' on the floor. She doesn't talk the entire clip but the crushing is awesome. There is nothing left at the end of the clip. Totally mashed. The red fruit is reduced to a pulpy mass by crushing. Goddess Joanna also looks at the camera from time to time. She eats the same fruit but she is not happy with it, because she drops it on the floor and squish it totally. Most of the clip is close ups, so you can enjoy the crushing more. There is a slow motion moment added and you can see it by watching the GIF.

Nicole considered mila the most devoted slave and today she wants to check it out. But when Nicole doesnÂt like the way the slave licks her feet, itÂs not easy for mila ..

The girls got together to have a nice time .. They took their slave girl mila with them .. they ordered her to worship their bare feet and threw afoot party. 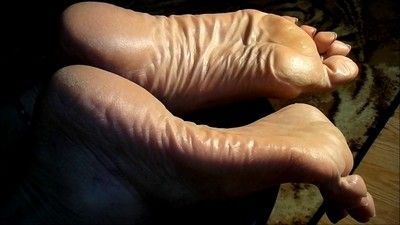 Alisa returned from a walk and, of course, her feet must be clean. For this there is a slave who will lick all the sweat. But first, let them savor the smell of socks and sneakers.

Lana believes that her feet should always be clean, otherwise she would have thrown this slave in the trash .. because he can't do anything else .. except how to clean her feet.

Alisa returned from a walk and, of course, her feet must be clean. For this there is a slave who will lick all the sweat. But first, let them savor the smell of socks and sneakers.

The girls got together to have a nice time .. They took their slave girl mila with them .. they ordered her to worship their bare feet and threw afoot party.