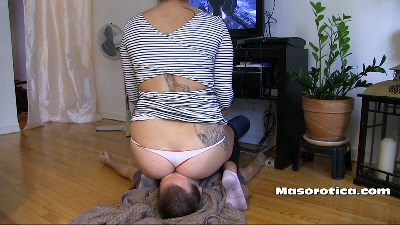 Queen Hanna and Mistress Jane are taking a trip with their human pony today. The old nag needs some excerise! Mistress Jane swings her leg over his back and orders him forward. The pony walks slowly behind Queen Hanna, who leads him by a rope. He may be old and lame, but who cares? Nobody! The two friends want to rise him and much faster, so move you old nag! 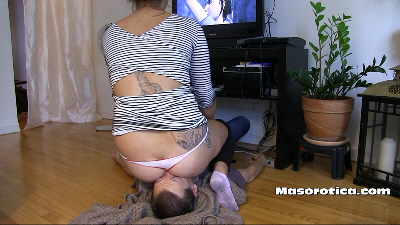 Now that you're my chastity slave, I need to start training you to think about something else other than jizzing. You live for me now, and you do what I tell you to. I find other things to occupy your mind, and today we're going to allow you to worship my boots! Do as I say, for I hold the key. You will be obedient. Period.

Novice Peter has now become a little glutton! Almost every week he is on the mat with Herrin Carter! So no wonder that in the long run for the mistress is exhausting and you have to get reinforments! No one less than Countess Viola rushes to help Mistress Carter to tame Peter's horniness!Peter was so eager to get to Mistress Carter that he did not even have time to undress! But that does not bother the Lady's at all and so, with scissors and practiced grips, Peter's erogenous zones are exposed!Nipple torture, eggs turn, squeeze and kick, blows on the tail and spitting, are proven means to exorcise Peter's his fuss! But a little pity the mistresses then have with your slave! He is allowed to scrub his small pleasure flask and swallow his slave cream, but not before he dutifully did his toilet service for Mistress Carter!

POV Foot Worship | by Goddess SofiaLook at my sweaty, dirty socks, I know you want to smell my socks, all sweaty, the stench strong, my big sweaty feet on your face, wash my socks with your mouth

Lady Amy has been torturing her slave for almost two hours. You can see because the idiot is clearly exhausted. But the Mistress doesn't care. She squeezes the air from his lungs, tormenting him with a massive reduction in his ability to beathe. She has fun deciding when and for how long he's allowed air. Until then she presses her hands over his mouth and nose. How hard do you think she would be on you? You would be as hopeless as this slave!

I'm here to make you fall in love with me, so you hand over everything. I won't be mean, I won't be cruel. I'm going to fuck your pocketbook with kindness and SEX appeal. I am here to seduce you out of all you got! Desire me. Crave me. WANT me with every part of your being, from your brain to the head of your cock. Give in! Say yes. Live your fantasy with me!