60813 - Monster shit sausage for the slave under the toilet chair! Part 2

Part 2: Here I have one of my toilet slaves, which was below the toilet chair and there had to sleep, a monster shit ausage, shitting in his mouth, in my morning, toileting! During the record-breaking shit sausage plopped into his mouth, I had to pee and also I pissed him doing well in his mouth. Thereafter, the slave had to eat completely the big shit sausage. He was then totally exhausted, had to almost throw up and was close to fainting! This perverse mouth shit and shit-eating video, you can see from 3 camera angles! 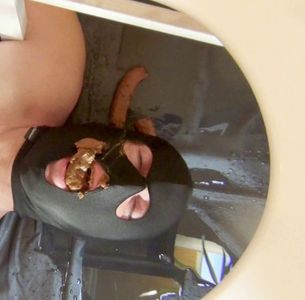 Two girls sit on their Couch Boy enjoying eachothers company. After a bit of sitting they begin taking turns massaging one another! The girl getting massaged moans in pleasure as we hear the gasps and suffering of the boy she's sitting on! Not only are they sitting on him while enjoying a massage, but the girls are SITTING ON HIS FACE! At times the girls are so into the massage they seem to forget he even exists under there! FEATURING ADALYN AND NATALIE! 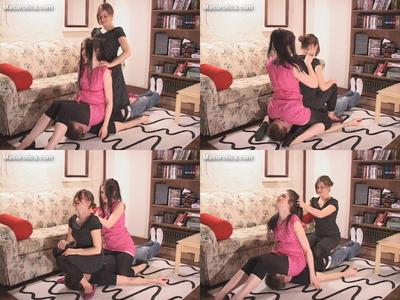 I haven't gone in 2 days and I feel it's gonna be a nasty one! I wanna give you guys a nice backshot view so I grab a chair and set it on the bathroom floor. Come watch me sit on it and shit out one nasty log that turns into soft serve as I sit on it and play with my pussy...

Alycia is kind of a smart girl who knows how to take advantage of this loser slave and here is just another perfect exemple! She knows about his foot fetish but she just fakes here that she doesn?t know just to have some precious attention on her feet! That was a very long day with her shoes in her feet and she knows he is probably dying to sniff her feet while she is watching her favorite TV show! She rubs her shoes around his face and asks him with her innocent smile if it?s possible to take her shoes off! She rubs her sweaty socks around his face to get a free foot massage and makes him sniff her socks while keeping her focus on the TV! She also makes him suck on her toes and lick her dirty socks and just pretends that she doesn?t knows what?s going on on her back! Alycia also wants him to take her socks off to give some fresh air to her feet and rub her smelly feet around his face again! That is just the perfect way to work on his addiction to her feet! Alycia also makes him lick the sweaty bottom of her soles and tries to catch his mouth with her toes because she loves to feel his juicy tongue right in between each of her toes! No doubt about it! Alycia perfectly knows how to treat this loser! What a Diva! Very Hot Clip!

Kate tied the slave to a special table for torture. At first, Kate pissed into the slave's mouth, and then she began to emit liquidchocolate poop. His mouth was full. Now, she begins to torture his body with sharp heels. The servant is lying down and writhing with pain with his mouth full of shit. This video was shot with three cameras! Enjoy the video from different angles.

Your so pathetic.. ALL U do is go to work to make money.. Which soon becomes my money.. You come home from work & go straight to your computer.. Your on my website.. Your buying all my clips & jerking off to my sweaty smelly feet.. Yet AGAIN!.. lol... Can't get enough of them can U?.. HA HA.. You live to see my sweaty feet fresh out of a pair of my stinky old well worn boots.. So go ahead & do what U do best BOOT BITCH.. My sweaty barefoot SLUT.. Stare at them & JERK it.. It's ur Only purpose in Life.

Are you ready to serve us ready for this? Are you worthy of us to lick the pussy, kissing the boots and let you spank your ass? Are you satisfy capable our Chicks, whether you have to lick when I sit on you and you have to fuck us the same case? You have enough sperm in your ridiculous dick to us so to fill the pussies? You are willing and prepared our piss drinking as a conclusion? This is exactly what has made our house slave. Are you also ready for this? Then Apply and we examine how worthy you are! 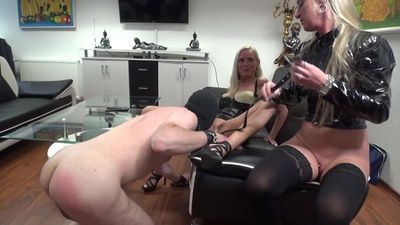 Have you ever watched a hot spitting blonde? No? Then watch Leonie now!!!Oh well ... ofcourse you've to lick it afterwards, but not until she spread it all over with her shoes and you've cleaned them!!!

Her customers are getting raves for their glowing skin. The secret? Her shit mask! As in, this spa babe shits on your face to use as face mask! She performs this procedure on a highly valued client and you can see her squat on the client's face, pushing to eject the scat out of her ass! After pouring shit all over the client's face, she makes the woman eat her shit so those nutrients will never go to waste!

Lady Diana loves using her slave as a toilet. She likes to humiliate her slave and to goof on him. Diana ate a lot yesterday, so a huge dinner of tasty shit is prepared for the slave. The slave is laying down and Diana shits on his face. A huge amount of shit for the slave. She smears it over his face. After that she sits upon his face to make him splutter with shit. The slave suffocates with a beautiful ass of the Mistress.

We were waiting for Clarissa in our studio and when she finally showed up in New Rock boots and black pantyhose, Candy became really excited. There was a whole different plan but she wanted to smell those nylons so badly that we finally made this one instead. She wanted to show you all how much she is into smelling a sweaty pantyhose matured in big leather boots. She inhaled it deeper and deeper with a growing smile and started to lick it with even more satisfaction. And when you see that cute smile on her beautiful face, you might realize, she is at least as much into the stink of feet as any other foot freak out there!

I wanna make a nice farting clip:)With a lot of juicy, wet,stinky gassy farts,and at some point I did it.But suddenly when I fart really wet- piece of brown pop out my ass.What can I do'I take my cam to the toilet and film there every single fart, pee and more pop out of my ass (not much but a nice closeup)My pussy is hairy, and I have no panty under my dress.The belly is big and full of gasses. 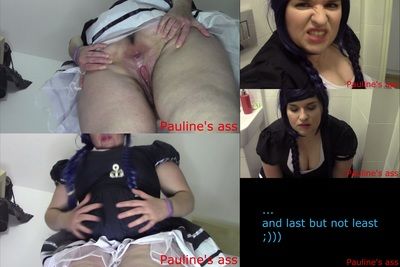 BRAVE! 440 km he drove to take care of my body fluids to be ! Secretly , he is permanently assigned for 5 years ! Respect! To strengthen the long drive first gabs a full glass of my divine Pisse..Du but are greedy .. all at once ? ... Now lie down on your back, ... I climb over him and spit him my spit directly in his neck , so that there is no escape! And swallow now , swallow , swallow ! He tasted it in any case !

After spending most of the day at the mall, Goddess Victoria comes to the club for a cup of tea and she wants you to take care of her sneakers, socks and soles. Your first job is to work hard on the soles of her sneakers until she is sure they're clean enough. Then you must inhale all the smell from the inside of her sneakers if you want to have a chance to smell and sniff her dirty white socks! When Goddess Victoria is satisfied with your performance so far, It's time to admire, smell and clean her sweaty and smelly feet. Especially you have to make sure that the space between her toes is perfectly cleaned and sniffed!

Darina wants to have a bath and therefore she starts to fill the bathtub with water. Listening to the bubbling sound she can't help herself - she urgently needs to pee! She starts to take off her dress, knees down at the ground with her legs spread and starts to piss. She pees until there is a small puddle of her piss - and then just starts to enter the bathtub afterwards!

I would suggest that you just put this video on auto play after the first video, because you might be pretty fucked up after part 1. How many shots did you end up taking to get me down to this skimpy outfit? Well now that you are all fucked up and drunk for me, the real fun can begin. I am going to use your drunken condition to take over your whole life. I am going to make you do terrible fucked up things and record them. All while giving me even more information on you. Maybe it is time you let me have your facebook account, your vanilla twitter, your email. It is time to truly become my little sissy slave.