I've spent all day in my garden working - and wore these see-through rubber boots the whole time. You can see how the foot sweat condensates on the inside of the boots - and way more will be soaked into my socks. I call over the slave and take off the boots - to coerce him to smell these stinky socks. He has to inhale the intense smell of my socks and I laugh at his humiliation - perfect to relax like this after a long day of work. In the end I bind the socks together and tie them around his head - so he got the most-sweaty part of the socks right beneath his nose - and he'll spend the rest of the day with my foot smell in his nose! 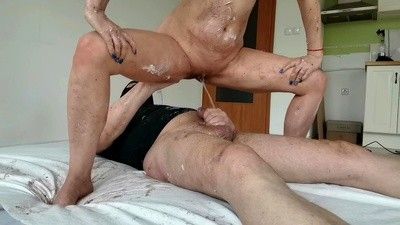 Is your mouth watering already, you little pervert?Let my ass swing you into an indescribable state and at the end this hot ass will even take your breath away.

ITALIAN SPEAKINGMy Santa Claus slave has a beautiful gift for Christmas. The gift he has for me is not in the classic Santa's sack, but is in between his legs. In fact, I have decided that he will have to offer me his useless balls as a sacrifice. Since with his tiny prick he can never please a woman, I will destroy his balls forever. I tied him in the center of my dungeon and started hitting his balls with my boots; my kicks are so hard that the sound you hear when I hit him is fantastic. Despite being tied up, the slave moves too much, so I hold him still and hit him with my knees. After having tormented him for good, I want to check if his balls still work. So I make him lie on the ground and while he masturbates I keep tormenting his nuts. After a while a little sperm comes out of his ridiculous cock. Obviously I ruin his orgasm but, judging by the modest amount of sperm that came out, I think I have almost reached my goal of castrating him once and for all. Who knows, next time could be the good one!!!

Happy Valentine's Day! What present do you deserve from me on Valentine's Day? You are right! Nothing just a fart. Sexy farts from Findom Goaldigger.

My gorgeous lips are so sexy, and they're also expensive. I love getting injections to make them even bigger and sexier. These big dick sucking lips love wrapping around a big thick cock, lips made for sex. Not for boys like you though, the closest you'll ever be able to get to these perfect gorgeous dick sucking lips is to pay for them. My lips are a luxury and I enjoy pumping your money into them.

Warning: VERY EXTREME Farting as well as mild Toilet Slavery scenes in this video. Today in Farting Into Your Mouth 3 I bring you more intense Farting and Toilet Slavery action.I love this position as it makes my slave suffer due to my entire full body weight on top of him. Like a good fart eater he also licks my smelly asshole for me so I can enjoy feeling my very loud and wet farts vibrating over his tongue in my asshole right into his mouth.After some very nasty and loud farts into his mouth while he was licking my asshole I could feel something else on the way, a very familiar stirring and I knew soon my slave will be getting more than just farts from my ass. There is no way IÂm now going to make a run for the toilet. My Fart and Ass Eating slave will just have to take one for the team and perform some Toilet Slavery duties.So I moved down to ensure his open mouth formed a perfect tight seal right over my asshole in order to make sure there will be no mess on my bed. You can hear it happen, how he gets much more than just farts in his mouth now. It felt so good, such intense delight and relief that I kept going. You can see his intense suffering as this happens as well as the expression on my face from relief and delight.In the end of the day it really is all about what feels good for me. My poor slave just had to endure this horrible fate to ensure my comfort and delight. Disclosure: This video is for extreme farting fans but also cater for the more mild toilet slavery fans. You don't actually see my shit in this video but rather hear my slave's agony of me shitting into his mouth during the end of my farts.Be sure to check out all my other intense and kinky clips! xoxo

You know the stunning Goddess Penelope already. She loves to taunt men and play with their egos.ItÂs addictively empowering.Having her black leggings and lovely green shirt the Goddess has a new slave beneath her feet today. Of course he is only a carpet for her, nothing more.After 1 minute of standing on the slave's stomach Goddess Penelope doesn't want to see his face for a while. She loves to use his back as a carpet leaving some nice foot prints. The slave Kneel is very obedient and silent at the same time. He also doesn't move at all. She's standing on his front and back almost the entire time during the clip. Actually Goddess Penelope has used the actual carpet only three times and it happenned when the slave had to be turned over. She was actually using the real carpet only for a few seconds. You can see that the slave is struggling beneath Goddess Penelope's gorgeous feet, but she doesn't care. Using her full weight on him she feels very comfortable. It's very beautiful sensual trampling by Goddess Penelope. Pretty much like a barefeet massage for the slave.There are some full body angles and some close ups as well.

Wearing a leather mini skirt, nylon wrapped thighs and shoes with very high heels I decide to punish Frank for breaking his mini penis, I put it on the ground and start trampling it with soles and stilettos , I feel the bones creak under my soles, Frank now I'll have to buy you a new cock.(speaking italian) 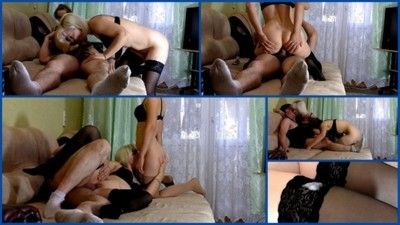 159749 - Facesitting and breath training for the loser

Milf Mistress Laura: I'll make myself comfortable with tea. There is nothing more relaxing than tea and a good book. Wait ... not quite true ... A cup of tea, a good book and a slave face under my feet is even better. The slave has to lie down under the kitchen table and serve as a living footrest for me. First I press my feet in old socks on his face. He's allowed to inhale the scent of my socks while I relax. I'm slowly getting warm and I let him take off my socks. The warm slave face under my bare feet feels so good. The slave under the table can use the time to lick my feet and free my soles from my foot sweat.

A young woman wears Doc Martens Tbars girl's shoes. She takes a walk and accidentally steps on walnuts. She enjoys the sound of crush and continues to step on all the walnuts she finds.

My dear friend! You look so hungry! DonÂt worry, sexy nurse is here to feed you. Now you will be my toilet. And you have to eat up all my shit everyday so you grow up to be a healthy, happy slave for women.Now, watch me prepare your delicious breakfast for you! Look closely at my asshole as all that delicious smelly goop fills up your plate. You canÂt wait to fill up all those nutrients and succulent chunks. It looks pretty appetizing. I bet youÂre drooling, arenÂt you?Now open up! I take my spoon and hand feed you every bite. You savor each morsel until itÂs all gone! Good boy!!!Time to get ready for work now! WouldnÂt want you to be late. Hurny nurse loves feed you! Come back tomorrow!

I wear my UGG platform boots for a walk. I smoke a cigarette with relish. What comes under my soles, the noise turns me on, you can see what is mercilessly crushed under the sole

My boot bi*** has to lick and worship my boots while I'm smoking a cigarette. I want this slut to suck my heels like a dick and I want him to remove all this disgusting street filth from the soles of my boots. Later I scratch and penetrate his useless ody with my heels.