Foot Gagging With Foot Slaps!VIDEO IN ENGLISH!Teen Princess Valerie chokes her slave deep in the throat with her feet and slaps his face with her feet.

Scene Â Abby has brought back Anna to her place fuck, then while on the sofa says shall we take this to the bedroom, Anna agrees but then has a confession to make that she suffers from a leaky bowel, Abby doesn't understand what that means and asks if she has browns her panties, Anna says no but she sometimes has a stain in her panties and she knows this when her ass feel moist which it does now so she would like to wash her bum first before making love to Abby.The next scene Â Anna has now has her wash and says that she will blow Abby mind when she goes down on her which she does but after a short while Abby is bored, Anna has no idea how to give her oral and she finally has enough and asks Anna what she is doing down there and says that this tonguing Anna is giving is doing nothing for you and you are not moist at all from yourself just from Anna sloppy mouth and that you want her to stop and you will finish yourself off.The next scene Â You are both out resting, both naked but Anna has her black footsies on, she then snores and farts and it wakes you up.Final scene . You go to the bathroom as Anna is still out and you are horrified to see her gross stain panties and her pantyhose in your sink and you say that dirty fucking bitch dumped her skid marked panties in my sink.

Empress Victoria time for torture today! we have here adorable goddess empress victoria sitting on a throne. the masked slave is ordered to take off his shirt and come closer to the goddess, where she starts to torture his nipples by some harsh pulling. but this is just the beginningÂ she also presses his encolared prick tight with her special heelsÂand wowowowÂwhat cool heels are these? high heel pumps with shiny spikes at the top, so these ones are the ideal heels for torturingÂ next the slave has to lie down flat on the ground, while his goddess continue to stomp on his pathetic cock. she goes on further by scratching the cock with the spikes of her heelsÂas we talk about heelsÂgood idea to perform some more nipple torture - this time with her heels. still not through with the torture she takes out some nipple clamps. well our slave really has to suffer today for his mistress! 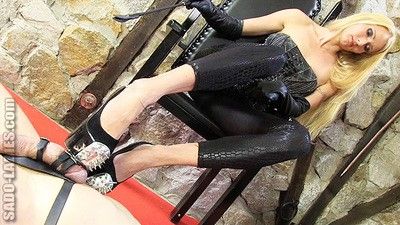 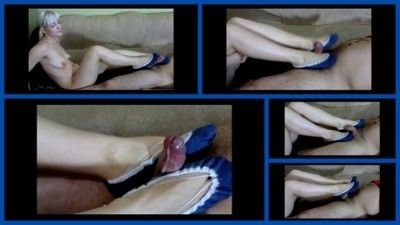 Nicole and Leyla decide today to play and humiliate this stupid slave girl polina. They order her to sniff their sweaty and smelly socks and laugh at her. Nicole pushes all 4 socks into the slave girl's mouth - "Do you taste good? Bitch!" Leyla, meanwhile, wraps the slave girl's mouth with socks inside. Pathetic sight.. The girls laugh at this whore harder and come up with various humiliating games .. They have fun.. What can not be said about the slave girl. They film her and promise to show this video to her friends. Then Nicole wraps polina's eyes and the girls take turns giving her to sniff their feet. "Whose feet stink more? Haha" - Girls laugh. polina has a difficult choice because the girls have not washed their feet for this for a very long time.

Carmela loves to humiliate you and treat you like a real loser, so that is exactly what she is doing in this clip! SheÂs heard about the fact that you would love to see her spit in your face, so sheÂs doing it during this whole video! She starts verbally humiliating you and tells you how loser you are, before she starts spitting in your face! You will have to open your mouth as wide as you can, and try to catch some of her saliva, but she plans to miss your mouth a few times, so that your face is completely covered in her saliva! She spits in your mouth, in your face, in your eyes, so at a certain point, you wonÂt be able to see anything! She tells you that she loves to treat you like a loser like that, and keep spitting in your face, while you are probably jerking off at the same time! Carmela is cute as fuck in this clip, but she totally verbally humiliates you! I bet you will have a lots of fun trying to catch her delicious spit with your mouth! You will have many opportunities to catch some of her spit! There is actually an extended version of this clip with a little blooper at the end. Bow down on your knees now, and be a good slave!

****** boot servant! VIDEO IN ENGLISH!Teen Princess Valerie rubs the dirt of her boots on her slave! First slave Smirni has to lick the young princess's boots clean. The dominant teen girl rubs the last mud on her shoe soles on his face and chest.

From this, you are my property, my toy that must obey all my commands. You must say me : Your Highness Commander Mistress Jardena. Get on your knees and give me your neck, IÂll take you to your new home. Open your mouth, I have a few surprises for you. You want to drink? IÂll spit a dirty slave in your mouth. And sit quiet or IÂll punish you. Although, you know what, give me your ass to practice now. YouÂll stay here for two weeks if you behave well

My slaves deserve the best and what could be better than being allowed to eat food pre-chewed by myself? While my slave is humiliated and tortured again and again, I chew every single bite in front of him and let him eat everything from the floor. Haha, how wonderful to watch as he squats there in front of me and eats like a pig from the floor! I do not miss the chance to humiliate him even more and crush the food with my boots before he may lick it first from my boots and then from my worn nylons.

Well, are you staring at my feet again, loser? Are you drooling already? Do you want to kiss my feet and lick them? You know you've to pay for this honor ... a lot! And on top of that ... they're really dirty today ... and you'll have to clean it all up! Come on, start licking my filthy foot soles! How does the mix of foot sweat and dirt taste? Do you still like it, loser?! :-D And don't forget to suck my toes clean as well! You'll clean every tiny bit of my foot soles - from the heels to the toes - until they're completely clean again! And maybe I'll take a few photos of you as well while you're licking my feet ... to make sure you'll be obedient in the future as well ... you don't want these photos to go public, do you?!

The guy lies on a raised platform. He is surrounded by girls sitting on bar stools. When one of the girls tramples on him , the rest put their feet on his face. They only trample him barefoot. When they each took their turn stomping on him, all three of them got up on top of him at once. Time: 6.46 min. Remastered - movie from 2007.

Your sexy but cute next-door woman in jeans and a pretty blouse is your undercover Mistress. You will soon discover her leather panties underneath the jeans and you will HAVE to worship Her Highness. The power of the queen becomes unambiguous visible. Merciless and without any appreciation She used this expensive pair of leather-panties, tortuously provided by Her slave, disregardful as an ordinary pair of panties for all-day life. Watch in close-up POV how you will tasting and cleaning some of Her dirtiest panties from over the last few days. While you're on your knees, She will humiliate and degrade you, while you taste Her scent from Her leather panties, licking the stained panties and also cleaning her pussy and asshole with your tongue.Â

A jeans ass worshipper like YOU, has come to the right place with Goddess Yasemin! She lets you worship her hot, bulging jeans ass and allows you to work your cock while doing it. Follow her instructions and worship her gorgeous ass!

Human Furniture Ass Chair For Twitter Fans!VIDEO IN ENGLISH!Teen Princess Valerie humiliates her house slave in front of the entire community on Twitter. She posts a video of using Smirni as a chair under her ass at home. She sits on his face with her full weight and uses him like a piece of furniture. And that although there are enough chairs around! What humiliation for Smirni on social media.