today we have a new trampling clip for you. usually we dont do so much trampling, but sometimes we do. police officers countess stella and mistress nemesis are called to come to a mansion. as they get in they are a lil bit surprised that there are 2 slaves lying behind the door on the floor. but they dont hesitate to misuse them for getting their shoes and boots cleaned with the bodies of the slaves. they both stand on their backs griding their high heels into their bodies. they also trample on their hands. both slaves are moaning soon under the weight of the officers. next mistress nemesis taking of her shoes and trample the slaves with her nyloned feet. both ladies have already forgotton why they were called to the mansion. they just enjoy themselfes and their treatment of the poor victims on the ground.

26653 - Together we use the slave for facesitting

Mistress Jane uses the slave to relieve her tension and invites her friend Queen Hanna to join in. She sits down with her butt on his face and makes herself comfortable. Queen Hanna, meanwhile, sits on his upper body and tortures the slave with her extra weight. His chest gets tighter and tighter and the weight doesn't get less and less until the two mistresses decide to switch places. This is the only time he can breathe for a short moment...

I told Lady Nora about the smother game I played with the slave a couple of times already - and she wanted to join me for a game! We?ll let the wheel of fortune decide how long the loser is smothered under our asses! Anything between 10 seconds and 90 seconds is possible - and we?ll take turns sitting on the loser?s face! It?s surely going to be a wheel of misfortune for the slave - when it throws a low number, we?ll simply make it harder for him by extending our legs over his body and sitting on the slave?s face with our full weight! In between one of us lays on the floor with the slave behind her - while the other one presses his face firmly into the butt on the ground! We don?t give him much time to rest in between the rounds and we?ve a lot of time to play!

ENGLISH LANGUAGEI stuck my slave in the bodybag. This position is perfect for smothering him and tormenting him with my legs. In fact, I want to subject him to a lethal scissorhold treatment. This slave loves my thighs and legs very much, who knows if after this last breath treatment he will continue to love them so much. The last few minutes, where the strength of my legs also join my hands over his mouth to smother him, are truly lethal. In fact, I knock him out, leaving him breathless on the ground. 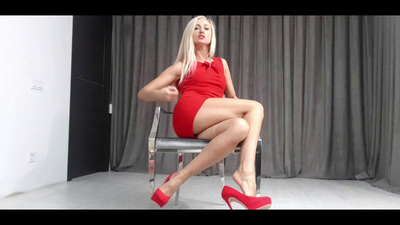 I know exactly what my feet and legs in Nylons do to you... I know this outfit makes you drop on your knees immeadiately and your brain starts melting. It's your trigger.Whenever you see my Nylon covered feet, you imagine how they feel, how they would smell if you were only allowed to come close enough... Maybe I would allow you to bury your face in my soles, maybe you'd be granted the honour of a few kisses on my pretty little toes. Reading this makes your cock already twitch, doesn't it?You are simply addicted - but that's a good thing! Addiction is motivation, addiction is power! My power!"Empowered by your addiction" means both of us... Knowing your weaknesses and triggerpoints gives me power over you. Power to form you, to train you and to rule you! But it also makes you strong enough, greedy and obedient enough to receive that kind of training. Becoming a little weak and willingless toy for me is what we both desire. Don't you hesitate, give in to your fate! Become my slave!

Seems you've been stealing step sis Ellie's panties to do dirty things with. Licking the cream, smelling the ass floss? Now you're going to get more ass than you could EVER want... with stepsis blowing FARTS UP YOUR NOSE!! And you WILL take it!! She even has a plan for if you don't shape up which is...

Get ready for another INDUSTRY FIRST that can only come from the creative minds of Masorotica Productions! Originally the idea of this video came to fruition back in 2008 in one of our 'doll' videos on a washing machine/dryer. It also had 'Vibrations' in the title. Only this time we finally got it done with a human being the 'ride' itself that Murderotica will SIT ON! Basically this concept has been floating around Hellgrinder's head since pre-2008! It will only see the light of day now in 2022! This title brings the FUN, LAUGHTER, and EXCITEMENT of the early days! It will bring you back to 2005 and we hope you enjoy the ride as much as we did producing it!We present to you the FIRST FACESITTING clip of it's kind! -'Facesitting Vibrations'. The washing machine is OLD and it vibrates HARD! It's like a wild rollercoaster with Hellgrinder's FACE as the SEAT and Murderotica as the rollercoaster RIDER sitting comfortably on her human seat she vibrates her juices all over it's face!The clip begins with Murderotica using the toilet (real sounds of her going INCLUDED because yes, it's all real!) and not using any toilet paper once she's done. "Sooo I just ran out of toilet paper. You'll just have to do the job for me ok?" Instead she will use Hellgrinder as both a bidet and as her own personal toilet paper! Hellgrinder's head is leaned up against an old washing machine as Murderotica spreads her ass cheeks wide and sits on it's face! Tongue inserted deep into Murderotica's asshole as she sits on it's face enjoying the hard vibrations of her washer! It's entire head and face vibrate between her ass cheeks penetrating deep into her holes cleaning out every pore! "Oh this is so much better than toilet paper. I have my own personal bidet! Ooh those vibrations feel really good! This feels so good I don't think I'm going to get toilet paper anymore."As the machine vibrations INTENSIFY so does the jiggling of Murderotica's ASS CHEEKS on Hellgrinder's upturned face and she's LOVING it! "I can sit here all day, just so you know." she bursts out laughing at one point as the machine vibrates HARD rocking it's head and face back and forth, back and forth!UNCUT TO INCLUDE ALL THE FUN, LAUGHS, AND CRAZINESS THAT MADE US FAMOUS! Amateur style footage done right! This clip is INTENSE and the VIBRATIONS are EXTREME! You have NOT seen a video like this before, so download your copy now and enjoy the show!'Hellgrinder's Edition' contains a 'Between the Scenes' EXCLUSIVE footage not available anywhere else for the collectors out there! 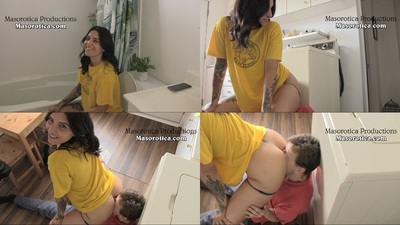 When Mistress finds you crying, she knows the reason why. Your girlfriend has finally seen the light and has dumped you because of your little dick. Now she's enjoying having big dicks pounding her pussy, and yet you are left with nothing. Well, not exactly nothing. You're so desperate to be a part of her life, you'll happily be her cuck. So now, you have to endure Mistress' cruel verbal humiliation before she makes you go ahead and beg your now ex-girlfriend for this new level of servitude!

here we have the next clip with superhot pro dom ella kros. she looks absolutely stunning in a semi transparent lilac rubber outfit. on her adorable feet she wears personal flower peeptoepumps with metal heels.she orderes her slave to crawl over to her and then he has to worship her beautiful shoes. he has to use his tongue from the beginning, but he is warned by his mistress not to touch her flesh with his tongue, cuz otherwise he will be thrashed severely! its ALWAYS forbidden for every slave to touch a mistress. the only things slave can get in contact is the dirt under the soles of a mistress. and as its inacceptable when there is dirt slaves has to lick it shiny and spotless.

Following on from the previous clip where I used this pathetic slag as my toilet, I now decide to wash him offÂ In a toilet bowl! I walk him inside and lead him to the toilet. I instruct him to his knees and push his head into the toilet bowl! Straight down, with my weight pressing on top of him, and thenÂFLUSH! I flush his head like the dump he is, soaking his face and head! I press my boots on the back of his head and flush again, holding his head deep in the bowl as the dirty toilet water disappears down the pipe! I tell him to confirm what a pathetic filthy slag he is while his head is pushed into the toilet bowl with my boot pressing on the back of his head! I flush his head over and over, and then. pull him out and put his dirty mouth to work! I instruct him to lick the toilet bowl clean for me while I stand above him, pressing him into the toilet bowl! I hold him by his ears and guide him all the way along the toilet bowl, rubbing his tongue across it, and guiding his tongue into all the dirty spots! Then came the most extreme part, I pushed the filthy disease ridden toilet brush into his mouth and push him to lick it for me while I explain just how far the rabbit hole IÂm going to take him! I love seeing my slaves go the extra mile for me. Go beyond their expectations for me. And that is exactly what this slave did during this!FILM SLAVES WANTED - Info at the top of the page!

To fuck a slave husband with a fist in the ass, to feel how everything inside him shrinks and from this the penis stands like a soldier at attention, it's such a pleasure. And I can't resist taking this standing pylon in my mouth. Oh yes, this is my double delight