Cruel Reell, Miss Catdeluxe, Mistress Jenny and I met again in Frankfurt am Main to have a crazy and unforgettable time together. Of course we made some clips again. The old full-time loser can't stand up to Cruel Reell, Miss Catdeluxe and me in his jerk off instruction. This slave bores us quite fast. We give this full-time loser several other tasks which are supposed to amuse us. We get bored and realize that he can't perform a single task to our satisfaction. Just a full-time loser! You think you are better?Then you may apply for our next fin- and femdom meeting.

Princess Serena holds the slave helplessly in leg scissors. His head is held tightly in position. With this the slave is completely exposed. He can only site there and wait to see what his mistress does with him. While the dominant princess presses her legs together she holds his mouth and nose closed. What is going on? Is he running out of air?! Well, bad luck, because breathing is no longer allowed! The pressure on his skull and the complete loss of control is just what this slave needs. Princess Serena has him in her grip and continues to torture him mercilessly.

Our slave likes our shit! We like to have fun with him in this way. And this time was no exception for him. As a reward, he was allowed to sniff our big asses and lick our feet. Then we shit a huge portion into his fucking mouth! It's so fun!

Pushing out a delicious poop before I vacuum seal it up to ship it off for you to enjoy 😉 ItÂs creamy and sweet, believe me, I can confirm 😉 I want you to kiss/lick/eat my shit and my pee!

Blonde girl with strange but funny accent, spreads her ass cheeks and does a nice shit into a green bucket, she shows the shit after. She talks throughout video. 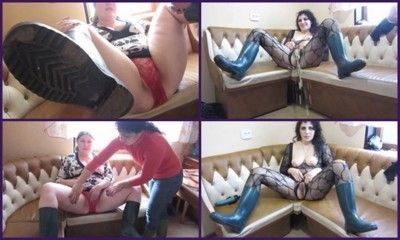 Richie has prepared himself his meal, a semolina dumpling soup, and sits down with the plate to the table; What Lea sees there does not suit her at all. Your slave sits unasked with the table with the meal. She orders him put himself to her feet on the ground and put this one down plates with the soup; Then she increases with her feet into the soup and distributes the seasoning beautifully. On order of his mistress Richie then must eat the soup of her feet; She feeds for him with the spoon in between times, too. And the drops go this one besides that, he still must soak mouth up with which of the ground.

There is not one day that goes by that I donÂt get a ÂIs Sydnee Capri Still making clips?Â Or ÂIs Sydnee Capri still available?Â questions! NOT ONE!! Well there is no need to wonder anymore folks, the legend has returned!!Sydnee Capri is literally one the 1st ebony Mainstream Pornstars I ever saw making fetish clips. She was KEEPING IT FUNKY waaaaaaaay before this store or even this site existed!! Unlike most of her peers, she also had no shame whatsoever Â as many film Farting, Scat, watersports, and gagging content Â but often under different aliases. Even to this day, there are plenty that do this in hiding Â including on my store! But Sydnee has been doing her thing for at least 15 years by my estimates, and as I have mentioned before she was the 1st to reach out to me Â I NEVER had to recruit her as we have been in business even before Scatshop itself was in existence!In her FUNKY return, She is working from home her regular nine to five (THAT my friends is why you donÂt see her often, THIS FUNKY lady like almost all has a normal life when they arentÂ entertaining you turds) at home when she has the urge to sneak into the bathroom to push out a few farts. These were some wet, stanky, FUNKY farts. She keeps errupting with epic farts and sharts, to the point she had to go get some spray because she couldnÂt take her own FUNK! I can only imagine how them jeans smelled!! Looks like Sydnee pushed a little too, as she pushed out one fart that turned into a shart! watch as the wet spot forms immediately in those tight jeans! Sydnee Capri is back with a bang in her first FUNKY treat in two years!

Bianca crushes a banana with her loud red open Heels; She pitilessly drills the glassy sales of her red Heels into the fruit; The Hungarian sadist really enjoys this.

I first invited my girlfriend Melany to smoke hookah. She was very beautiful and I have long been looking for an opportunity to meet her alone. She was a little drunk and she was puke after yesterday's party. She drank with her friends and felt bad in this morning. Suddenly she wanted to shit and I suggested she use me as a toilet. I have long wanted girls to use my mouth for its intended purpose. I licked her asshole and got the shit out of there. I savored every bite. She pissed in my mouth and I swallowed all. Then she vomited into my mouth.

It was a sunny relaxing day. I was sitting enjoying some quiet time drinking a beer my slave had bought me :) so his reward was some domination and humiliation by me!Â Â i decided to give my slave a FACE MASSAGE using my perfect feet ;) I know, he must be dreaming haha. I go gentle around his face, letting him smell and feel my perfection. Sometimes, I'd just rest my feet on his face, using him as a FOOTSTOOL. I couldn't help myself to make him SUCK MY BIG TOES, moving them inside his mouth

Engr. Lee - the armpit sweat freak!Julia has never experienced anything so sick. This perverse freak wants to lick her armpits and inhale the smells of her armpits. What the fuck!

Lady Karame gets a call that annoys her very much. She stamps up the stairs angrily and gives her slave a good beating with the cane. He tries to get under the bed to safety, but that was a fatal mistake. Sexy mules and nylons in perfect close-up!

My dear servant has misbehaved. Therefore, he had to drink my NS since he did that bad, I had the same still KV for him. Now there was a fragrance and SchmeckÃ¼bungen. However, it was not enough to me, so I immediately pushed in his face.

Custom video:All right, i would like a Cum eating Instruction Video (CEI) . Tease me with a little bit from everything...Legs, feet, pussy, some sloppy mouth play (Finger sucking) but mostly ass. Make me worship everything from your body, seduce me in every way. Control my jerk off pace by making me focused by the moves of your hands, by doing most of the time alot of jerk off demonstrations (Jerk off gestures, like u always do). Let me appreciate every different angle from ur body and walk me trough every step until u make me eat my whole load for ur ass. With this message iv'e send u some pics of the positions and poses u tend to do, which are so hot and triggers me so much.Â  So i would like u to do these most of the time to get me real turned on. I would love to see u wiggle ur ass while showing ur soles and at the same time sucking ur fingers. So yeah, kinda stuff like that . I would like u to wear ur short pink Dessou which i send u too. Ur short pink underwears or tanga with the pink bikini. The rest u can be as improvising as u wish. Just tease the hell out of me.

Mistress Jayne gives this guy more than he bargains for as she catches a robber in her house. She ballbusts him, spits on him, Scissors him, and pees in his mouth.

123190 - from sausagesucker to shithouse forever, addicted to the Mistress

The shit-house is now well-trained. It always brings the mistress beautiful gifts. It does fitness exercises and of course it eats the mistress' vegetarian sausages. A good shit-house.