Today you will have to lick away the dirt from my boots! Every little piece of dirt! They are completely covered with mud because of my walking in the woods! While you do your work I'm going to humiliate you! :) This is exactly that what a dog like you deserves! Look there! There is another big piece of mud! Clean everything, you loser! Eat my dirt - and don't forget to say "Thank you!"

Now I'll try the car crush capabilities of the big 3 ton Sprinter van and the much lighter 1.6 ton Audi S4 - I brought 2 metal toy cars to test each car - and obviously all 4 gets crushed completely. Which of my cars will destroy the toy cars more easily? Will there be any noticeable difference? Watch the clip and find out!

You like the sight of me, wearing tight and short jeans hotpants, don't you? I know about something that will even beat that feeling! Slowly I pluck the object of your very own desire out of my hotpants. A streak of my sexy white thong nuzzles on my hips above the waistband now... you're already drooling, begging me to show you more of my gloryful thong. While my ass comes closer bit by bit, I pluck the other side of my thong out of the jeanspants until the complete luxuriousness reveals in front of you! Except from my perfect whaletail, I only wear a bra without shirt.

Simple, short but extremely hot video)) Youâll see my sexy legs and ass covered with shit) Especially for you Iâm wearing my favorite tights, and put a whole bunch of crap in them !)) Sometimes nice shit and pee while Iâm home alone, especially after a hard day at work)) Want to see? Love you all, stay connected, ahead as always, many new video))

While I play around with my beautiful black dress, I deliver you an insight into my luxurious body. But don't even think that you get it all for free!! You have to pay MUCH for looking at me! You have to cough up for your luck, so give me all your sexy banknotes, bitch! You're a full-time loser who's predestined to pay for luxurious, dominant ladies like me because that's the only reason you exist. So make your life meaningful and pay hard!

Today I've some more food prepared - to be crushed under my bare foot soles and heels! First up are a bunch of cookies in a plastic bag - this way you can perfectly see how the cookies are slowly crushed into dust by my sexy feet. Next up is a pile of macaroni noodles - they make such a great noise as they're crushed and broken! And for the final part there's a whole bunch of chocolate-covered peanuts. I take my time crushing them, but make sure that they're all flat in the end! This is a non-exclusive custom clip for a fan. If you want me to do a custom clip for you contact me at marissa@madamemarissa.com!

Again I was training my toilet slave. I like to punish slave if he does not obey me. Lick my shoes and suck my heels stupid pig. Swallow my spit. Drink my pee, my toilet. You just a useless thing and must eat all my shit. I will sit comfortably on the chair, and you lie down and catch pieces of my shit, my toilet. Do you like being my toilet? You want even more of my fresh shit. I will use you all the time as I want to go in the toilet.

She is tall, beautiful, and she has the longest second finger on her legs, which makes her special.Today she handcuffed this pig, threw him on the floor and began to simply water the insignificant slave with a huge amount of white saliva. She spit on his face, just smeared her saliva on the face of this bastard, who only can take the saliva of his Mistress. This bitch just lay on the floor and mooed until his mug became dirty, smelly, and he could not do anything.

I've got a nice load of shit in my ass for us. Watch me push it out so we can eat it together. Just you and me enjoying each other's company and enjoying a nice, big, fresh load of my delicious poop!Mmm! It tastes so good! I love licking my shit and trying to determine what it tastes like. I remember what I ate last night and wonder if that's what is in my poop. Am I tasting the avocados or the tomatoes. Look at how beautiful my shit is. Would you like a taste? Here, lick my turds. Taste the shit that came out of my ass. You and me, eating my shit together!Enjoy!

Your mistress is back! And I have a special task you never saw before! And a very cruel and nasty jerk-off instruction... *g* Today it's time for your first true challenge! Do you dare to follow my instructions...? Just watching my sexy outfit will make you buying this clip! I know it! :-D You are already drooling soo bad! And you want to wank your dick! And you are allowed to wank your dick today - but only if you follow all of my orders... exactly the way I tell you!! *g* I'm sure I'll have lot of fun watching you...But I doubt that you will have some fun too... :-D But don't waste anymore of our time - and get this clip now!!

1.Mrs. Grace loves when a slave licks her ass with shitGrace is very excited when she shits in the mouth of her slave. Grace pushes a bunch of shit right in nylon stockings that are stretched on her legs. Then he sat down on the slave's face so that he gasped and licked her dirty crotch, the slave licks ass, Grace moans and her fingers are in her pussy. She feels astonishing because she has placed shit on her slave. The humiliated loser licks her ass. Having removed the pantyhose with plenty of shit, she spits on her shit to put it all on the face of a slave, and then wipes her butt on him.2.Erin sicks up at her boyfriendErin spits at her boyfriendâs face. She roars with laughter. She sits down over his face and pisses on his face. Erin has drunk a lot, she is vomiting, she sicks up at his face and into his mouth, sprawls. At the end she fastened by a stapler a paper with â a goof and a jerkâ at his chest3.Grace, with beautiful breasts and big ass humilates a slave, she sit down on his face and fart. This winds plagued Grace all day and now slave receiving portion by portion of fine gases in his nose. And now slave must to lick the ass of his Mistress, Grace filled his mouth crap, poor slave drowned, but Princess Grace like this and she is very exciting to shit on the slave, she musturbating pussy with her hands, rubs her ass on his full of shit face, stronger...stronger...and finally Grace finished with screams...4.Girls goof on a guy. Erin put a guy on his knees and Grace puts handcuffs on his hands to completely immobilize him. Now he is a slave of two young beautiful women. The slave is on his knees. Erin kicks and punches in the face of an unfortunate slave. Girls spit in his face, they laugh. Erinâs laughter is very exciting, and now the slave has to lie on the floor and his face is placed under a special chair for making him immovable. Grace sets over his face and farts in the mouth. Erin laughs aloud. Grace shits in his mouth and Erin beats his body with a belt with wild laughter. Now itâs Erin's turn. She sits down on the slaveâs face, farts aloud and pees on his face. Now girls spit in his face and attaches papers with the furniture stapler - shit, loser, mouth full, they laugh, spit on, and kick the slave.

I've blown up all these animal print balloons and now it's time to pop them! I dig my red leather heel into each and every one of them until they pop. The noise is so loud in the enclosed room, it shocks me every time! Come watch me have fun! 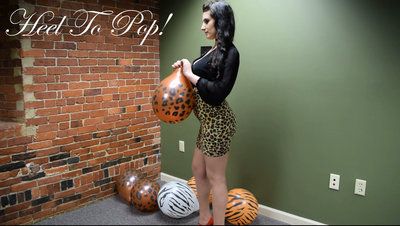 The husband comes home from work to find his wife in bed clutching her stomach and in intense pain. He rushes to her side to help her and she says she ate too much and now her stomach is hurting real bad! He tells her to shit it out but she can't seem to poop normally. So he takes out their trusty vibrator and rubs it on her asshole, stimulating it to help her shit. Once she starts to fart, he makes her squat on the bed and places toilet paper under her ass to prevent shit from spreading all over the bed.

Slava dominates Alex with her wedge high heel shoes. She press his face hard with her shoes. Slava squeeze Alex's lips with rough soles of the shoes and leave marks on it. She also crossed her legs on the slave's face. After that she take off her shoes and put her stinky feet in pantyhose on the Alex's face. He smells and inhale divine aroma of Slava's sweaty feet in pantyhose. Slava also crossed her legs on the slave's face and hard pressed his lips.

Goddess Andreea had a custom request from a good fan of her. She must be hard domme and make a POV toilet story for her fan: to prepare his meal ! She was wearing high heels, and she must spitting in a glass, pissing in another glass, and make a shit on a plate to can serve him ! Enjoy your meal also, bon apetite ! 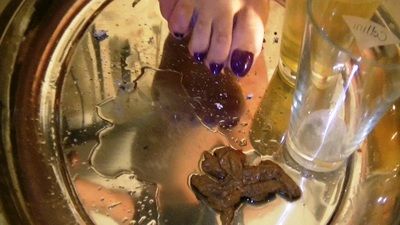 I teamed up with Virginia for another trampling video and this time we're both wearing flat, but deep-treaded, winter boots! We walk all over his body, jump on him, stand on his head, face and even his throat! The deep treads leave nice patterns all over his skin and we're clearly having some serious fun. In the end we take our boots off and trample him for a short time in socks - and of course make the loser smell our socks - which could've smelled pretty bad after a day in warm winter boots :-D

1.1.Girls goof on a guy. Erin put a guy on his knees and Grace puts handcuffs on his hands to completely immobilize him. Now he is a slave of two young beautiful women. The slave is on his knees. Erin kicks and punches in the face of an unfortunate slave. Girls spit in his face, they laugh. Erinâs laughter is very exciting, and now the slave has to lie on the floor and his face is placed under a special chair for making him immovable. Grace sets over his face and farts in the mouth. Erin laughs aloud. Grace shits in his mouth and Erin beats his body with a belt with wild laughter. Now itâs Erin's turn. She sits down on the slaveâs face, farts aloud and pees on his face. Now girls spit in his face and attaches papers with the furniture stapler - shit, loser, mouth full, they laugh, spit on, and kick the slave ....2.Grace scat piss POV Kiss my ass

I am trampling Pete in two different type of pumps. Both have thin heels, but the last ones are really thin and sharp.At the end you can see pictures of the marks my heels left on this body. *no audio*