Mistress Anna: I let my foot slave lick my golden high heels. I need clean shoes for my date. What's better than the tongue of my foot slave ?! He has to use his tongue as a washcloth for my shoes. I ask that he lick the shoes and soles clean and also clean the insoles with his tongue. When he does his job well, I stimulate his body with my nylon feet while he cleans my shoes.

159477 - Cleaning my muddy boots on the useless slave (small version)

As I get back in, I notice how muddy my ankle boots are ... and call the slave over, so he can serve me as a living doormat. I step on his body and clean my shoes on his shirt while trampling him. Of course, I can't resist to rub my muddy boot soles through his face as well! And when his shirt is already completely dirty, I push it up and trample his bare stomach and chest as well. After a while, he's completely covered in dirt, but my boot soles aren't completely clean yet ... so he has to stick out his tongue and lick the remaining dirt from my shoe soles - until his tongue is black from the dirt as well!

134209 - Cleaning my muddy boots on the useless slave (small version)

As I get back in, I notice how muddy my ankle boots are ... and call the slave over, so he can serve me as a living doormat. I step on his body and clean my shoes on his shirt while trampling him. Of course, I can't resist to rub my muddy boot soles through his face as well! And when his shirt is already completely dirty, I push it up and trample his bare stomach and chest as well. After a while, he's completely covered in dirt, but my boot soles aren't completely clean yet ... so he has to stick out his tongue and lick the remaining dirt from my shoe soles - until his tongue is black from the dirt as well!

Feebee was itching to go against chadam today. In fact she was already a little hot and bothered, and enjoys wrestling chadam, a lot. It didnÂt take long for Feebee to secure her place ontop of him, and jumping directly onto his face. She manages to get some great facesit taps, then got him into a full weight facesit. She had an evil yet cute little smirk on her face, then out of no where she rips off her bottoms. Now she rams her naked pussy down into chadamÂs face. She also uses a few good cross body pins that she turns into spladles just to humiliate chadam a bit. Even her reverse facesits were super sexy, ramming his face deep into her ass and pussy, enjoying every second of it. Feebee was now wet with excitement as she continually slams her pussy down into chadam face, making sure his nose was buried deep, just so she could enjoy and get off on the sexual rush, and domination. Wow, is all we can say. This girl is smokinÂ

I wear a lot of different nice underwear. I look great in my underpants and in my bikini. I wear lace underwear. I take off my clothes and put on new underwear. My friend takes a picture as a souvenir. I like to change. Friend is excited. 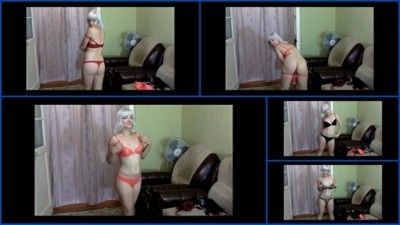 This wank object also wanted to be treated necessarily times real of me... No problem I love to play with new slaves so I invited him to me ... With electricity I will drive him the jerk off. He stands with fixed hands on the cross. His sack I tie off tightly. First I work on him classically with the carpet beater before I attach the electrodes to cock and balls... He starts to wriggle wildly but that's not enough. I also want to live out my sadistic streak with the current needle wheel on him....

ENGLISH SPEAKINGMy slave today is lucky enough to be used again as a total toilet. But first I allow her to lick the soles of my beautiful shoes and hit her with my whip, which I will not hesitate to use more ******fully if she makes mistakes. Since she's been doing her total toilet duty well for some time now, I will allow her to worship my ass and panties. The time has come to empty myself and fill her mouth with my shit. Now she has to show me what it's worth as a shit-eater toilet, so I order her to start chewing. If she doesn't want to be whipped she has to get busy. In a short time she frees her mouth from my shit, so I push the one that is left on her face, since I tied her hands to prevent her from touching. In the end she ate everything, I can be satisfied with her training and maybe next time I will share this toilet with some of my friends!

Today you are allowed to eat the sperm of 7 strange men ! And you will eat everything, because it's the duty for a whore like you! Let's see what a lot comes together ! Get down on your knees and swallow! You will not waste a drop or whine! Because you want to be a good whore !

In the evening, the pretty slave is at the service of her master. His job is to be good to receive the bonus. Can you smell and lick your feet with passion to receive this bonus?

Gamer freak has to watch his girlfriend fuck a real man! Moritz doesn't bring anything together in bed with his girlfriend. He's only interested in computer games. He can have the highest just cybersex with his Playstation. All day long he does nothing other than occupy himself with computers and games. His girlfriend, this sexy brunette gazelle, therefore invites a colleague of hers to have real sex with. In front of the freak's eyes she is fucked well by the stud and finally gets his cream in the face.

Over 110 farts in 25 decadent minutes--this is not a compilation to miss.This hot supercut contains every fart in all of my clips during the month of August 2019. It's sure to be one of your all time favorite clips if you're a fan of sexy and cute, loud, face melting, perfect BBW farts.Titles of clips featured in this compilation:Shackled Facesitting TormentHuman Furniture Fart and SockHuge Relentless Farts on My Slave's FaceCuck Sucks Up Farts Before My DateClean My Fucked Pussy and Eat My FartsEat My Gassy Gamer Goddess FartsOrgasms For Me, Farts and Waste For YouVirgin Punished for Dreaming of SexIgnored Slave Edges to Face FartsFinancially Ruining My Sissy Fart SlaveSlave Picks Farts Over Chastity ReleaseThe Closest to Sex You'll Ever GetFootjob Edging and Fart Worship

Our slave has been restrained and we will show him no mercy! He now gets to feel our cane. The chaste slave has deserves nothing else and the three of us have fun beating him again and again with it!

It's time for my little sissy girl to learn how to suck dick. She is so scared and reluctant, but I remind her that she wants to do it. I'm much taller and bigger than Kitten; towering over her, you can tell she feels helpless but to comply. She coyly says that she's excited to become a skilled dick sucker. So let's get her started with a nice pink dildo.I remind her that this isn't even close to the usual size of the cocks she is going to be made to suck. Taking the length of this down her slut hole should be so easy. I start by instructing her to tease the tip. Next, to worship the base ofthe cock and go up the shaft and twirl the tip in her mouth. With a little effort, I get her to do a satisfactory job fluffing up the cock. But she needs to perform the full treatment.When I hold the Sissy's chin in place and face fuck her with the dildo, she quickly gags and cries. I slap her. Taking dicks is her job from now on, so if she can't even swallow a small toy dick, how can I rely on her to service multitudes of long and heavy real dicks? I shove the dildo down her throat and gag her more. I'm so disappointed.I drag my Sissy onto my lap and begin a severe paddle punishment. There are repercussions for being a bratty and whiny Sissy. Especially when you're so weak and small like Kitten. She is already such a worthless little whore. If she can't do simple things I ask of her, she gets a beating. I give her two rounds of 10 paddles with a bunch more that I lost count of. Finally, I make the crying, beaten whore kiss my feet and thank me for teaching her.

DonÂt miss the launching of the new series of Real Femdom clips starring Goddess Kiffa.First Episode, part 2:A new idiot applies to be Goddess KiffaÂs official domestic slave but he has no idea of the humiliations she is about to put him through.Distraught, the slave stupidly burns some of the food which prompts her to refuse the food and slap him on the face. Now he has to start all over again. At this point he is startinstarting to realize just how hard it will be to please this perfect goddess. Kiffa now makes her servant lay under her chair while she eats the meal he cooked. There are two angles available here: YouÂll get to see the action from both of their POVÂs. The mean queen is still not pleased and makes the slave lick the soles of the sneakers she had him buy her, she steps on his face, stuff her sweaty socks in his mouth. She even hits her feet to his face and makes him thank her for it.