I know you've been distracted at work. You're such a little hand humper, that's why I've called you into my office. You need to be programmed to be a better worker for me. I see you staring at my tits, I'm going to use your weakness against you, to mesmerize you into being a good little work slave for me!

86586 - CBT and trampling - Goddess Antonella and her slave

Goddess Antonella tying up her slave's cock and balls then trampling and pulling the rope and walking him like this. Then he kneels and kisses and smells the legs and shoes of his Mistress and lies down for a trampling lesson.

You thought normal trampling with hiking boots was insanely hard? Let me use my new hiking boots to show you what really hurts! They're brand new and the deep hard tread is still sharp edged. I push the slave's hands to the ground and then lift one foot over his hands slowly â¦ only to stomp down HARD on them right away. Mercilessly I stomp down on his hands again and again - and each time he's screaming in pain and nearly jumping from the ground in pain! He's clearly afraid I might break his fragile fingers, his hands are shaking and he's almost in tears - but I continue to stomp his hands relentlessly. In the end I even make him kiss each boot to humiliate him even more - making him kiss the boots that just hurt him so badly! This clip contains nothing, but hard merciless stomping throughout the entire clip!

Guy reserves a private place so that he and her wife can have some intimate time in a nice room. At first, he kisses and slobbers all over her mouth! When he gets satisfied, he unbuttons her top and pulls her tits out of her bra! As soon as he got access to her boobs, he squeezes them and sucks her nipples! Shortly after, he lifts up her skirt and then rips certain portions of her stockings before licking and devouring her toes! Then, he removes all her lower garments to get unobstructed access to her pussy and begin eating it! When he gets satisfied, he directs his attention to her asshole and anally finger fucks her! He eventually stops, but only to perform an enema! Immediately after he injects the fluid inside, she accidentally defecates! Apparently, she couldnât hold it in! Not wanting to incur additional charges on the rented room, he quickly picks the poop in the pursuit to clean the mess, but what he ends up having are two hands smeared in feces!

Milena brought not g/f but some other family member - will not participate. This girl was so amazed with B2P filming idea so itâs not a surprise that she could complete punchball B2P though she blows slowly and neck holding was imperfect in spite of my instruction attempts. I have some evidence of she vaping. âThatâs not so scaring as I guessedâ. Yeah, outdoor sound with rubber relaxed by approx. 10 Celsius degrees weather is not terrific.

To all you guys who supplying so willingly to clean my apartment - here is what you'll get!First, we'll dress you up a little and then it' s clean up time!Floor, Bathtub, Heels, my Toilet - he has to lick it all clean with his filthy tongue! So disgusting!

86588 - Kinky action with Goddess Antonella and her slave

Every day a new clip surprise for my slaves until Christmas Eve. Enjoy 24 days in a row something special.The clips include the following fetishes: Tit WorshipAss WorshipJOISmoking FetishCEIHumiliationNylonsSocksFeetFemDomFinancial Domination BlackmailTease and DenialAs well as some extra which you can win by buying every clip until Christmas Eve.

Here's a nearly 20 min collection of CLASSIC toilet clips from Lady Aria!!! Aria is one of my original Funkyladies from my first real year in business. She was one of Ms D's Friends, she introduced us, and the rest was history!! Ms D told me before had she had friends that wanted to get down to and that they Had big ole asses too! lol She wasn't lying!! Aria was truely a treat for me as she one of those chicks I always fantasized about seeing take a big gassy stinky dizzump!! Enjoy a nice mix peeing, pooting, sharts, and plops!!

The title tells it all: this clip is a chance to gaze the divine beauty of Elsa's perfect hot soles, no more, no less! She starts sitting on the sofa, kicks off her flip-flops immediately and shows her wonderful soles, slightly dirty from the dust catched by her sweat. After one and a half mins, she stands up, and shows what it would be like if she crushed your face with her gorgeous soles!

You have been a very good slave lately. I guess it's time to reward you for your good behaviour! Look at my hot and sexy body. That drives you crazy, right? Today you are allowed to jerk your cock very hard and to get a reward. My hot big tits are waiting for your hard cock!

My slave has been so annoying to me lately. He's been answering me back. Not a good idea! So I have decided to punish him by making sure he can't speak. I bound his head in vetwrap, and although he can breathe, he is now fully incapable of answering me back. I then place him on the bench in a very stressful position. With his feet and arms stretched and tightly bound. He's completely helpless and can't move, with the exception of his head. As he struggles for air, he feels his head is going to burst . I leave him there to suffer for a while. When I come back I find his muffled attempts to speak and breathe so amusing under his headwrapping. I tell him he's going to wish he never answered me back. I begin by sitting on his chest, and making it even more difficult for him to breathe. His gasps for air become more and more desperate as I continue with hand over mouth smothering. He tries to move his head to get away from my hands for some air. However, it's useless as I'm in total control of all his movements. I then stand up and put his face where it belongs. In my beautiful ass, for some ass smothering. He continually gasps for air and I know he's getting breathless. I don't think he's had enough just yet. So I'm going to leave him there to struggle and suffer. Perhaps later I'll return and punish him some more...

We both already know on who you will spend all that money on. It will not be your ugly wife, of course not. lolNo you rather think about how many beautyful things you will buy me and the smile on my facewhen i get all that gorgeous stuff. Of course we still cant forget your stupid bitch, can we?... Well i have the perfect idea. Just listen and follow my really easy instructions. At the end its the thought that counts, isnt it. haha 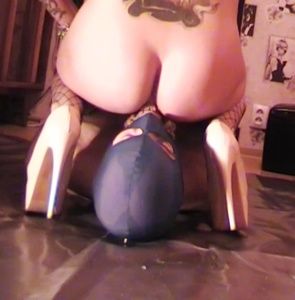 I sit in the garden and read a book. My toes are painted with black nail polish. My feet are also a bit dirty. You may come closer and watch me and my feet, while I ignore you. Just imagine, what you would do to these beautiful feet. Would you massage them? Would you suck my toes? Lick, kiss or smell them? Tell me!Just a sexy foot show clip. Enjoy! ;-)

Your biggest christmas wish every new christmas is to take NO MATTER WHAT comes out of my holes.Everything is absolutly better and more important then you sick little fuck. Kneel Down worship my divine Ass and Pussy while sick fucks like you get what the deserve ornot deserve.... Do you think you are worthy enough to be my toilet. haha To open your mouth wide and waiting with patience whats coming for you. Lets find out you nasty pervert.

Hello everyone. Let me introduce you Princess McKenzie. She was outside having fun as usually and she came back to check her slave as she left him in the cage with his hands out. She looks so stunning wearing her blue dress and her black low heel ankle boots. This boots are very worn as she told me. Princess McKenzie needs to make a phone call and once Princess McKenzie has started talking on the phone, she completely forgot about the slave laying down there. She's started walking back and forth by stepping on the slave's hands absolutely carelessly. I mean Princess McKenzie didn't even look down the floor in the whole clip. Actually she did it only one time for a second. But nothing changes. Maybe she has noticed the slave's hands laying down on the floor, but it was like it didn't happen at all. The phone conversation is more important. She kept talking and she got angry during the phone conversation. In the beginning of the clip there is a moment where she's stepped over the slave's thumb finger on its right hand and her heel just slipped out on the floor. I made a slow motion, so you can see it by watching the GIF. When I was watching the clip I've realized that's completely full weight. She takes her boots off at the end of the clip and made some really good stomps on the slave's hand using her bare feet. The hands and the fingers of the slave are so small and Princess McKenzie is walking all over them by stepping on the same spot over and over again. That's really painful. There a few moments she is standing on his hands for awhile. Some full body shots and more close ups as always.