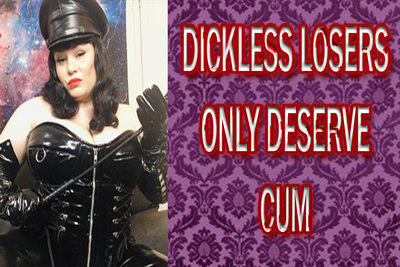 159279 - STUPID questions and what I never wanna hear you say, sucker!

As you know dumbass I'm not that basic clip misstress but very busy interacting with my slaves every day and of course new aspirant subs keep writing all the time. I am a dream come true for every submissive soul and serving me is a huge privilege for every bitch out there. Since I decide within seconds which loser gets into my inner selection it is very important to know exactly how to behave! There are a lot of things I never wanna hear a slavebitch say; things you can never ask for, things that just trigger me and make you get rejected. Loserslaves have to show respect all the time, never ask stupid questions, talk back or question my orders! I decide what you will do - it's all about my pleasure and I don't care what you like; so just get it fuckface what you have to say and what not!

Hailey got an offer she couldn't refuse, Sara challenged her to a match. Hailey was nervous yet somewhat confident as she stepped onto the mats. Sara is tough, very dominating, and loves to tease, taunt and humiliate her opponents. Hailey manages to get Sara down, get a few good facesit taps from her, but Sara was actually letting her, before she unleashed her own raw power onto poor Hailey. Sara folded her in two while facesitting her, taunted Hailey, shoved her nose deep into her ass in reverse, and even let out a few farts and rubbed them into Hailey's face. She belittled her, telling her that shes making her horny by rubbing her puusy on Hailey's face, and verbally humiliated Hailey, until the end. Hailey was breathless, worn out, and was to say that Sara was her Step-Momma, and that Hailey was her bitch. This video is superb with serious dominating, and humiliation, to say the least.

If you enjoyed 'Smoking Statues Challenge' then welcome to Level Two, once again you're my human ashtray, still and silent as a statue, I've got your cock cage leashed and my flogger and whip ready to test you. If you manage to stay still and silent then I'll be kind enough to put you back in your cage... if you fail, which lets be honest, you will, then you're in for a surprise with my strap-on.

Two young Princesses Sofi and Kira use their human-furniture slave in their daily lives when watching a movie and drinking tea. For half an hour, two Mistresses continuously sit on the face and stomach of the slave, as if on a sofa, completely ignoring him as a guy, treating him as a thing. It can be seen that it is very difficult for an submissive guy to breathe because his mouth and nose are closed by the divine ass of Goddess Kira, and Goddess Sofi is sitting on her stomach with all her weight. The slave tries to twist his head to breathe at least somehow, but Kira does not even think to get up to let him catch his breath, but on the contrary straightens his face up to sit on his mouth with her panties. It is also clear that the slave very much respects his Mistresses, so even when the Goddess sits on his face with fullweight, he tries to lick her pussy and kiss her through her panties. In this long clip, the submissive boyfriend is used by the girls as: chair slave, human furniture, couch slave for fullweight facesitting and stomachsitting.

You have had training, first a finger, then small butt plugs now its time for You to have this. Mistress will so enjoy introducing you to her black cock. Now bend over and don't You dare move Slut.

Is Goddess Vanny's slave pony finally in top shape? She's about to find out. She sits on his back. The slave must now carry her around and do exactly what his mistress rider wants him to do. He is her slave - and thus only a pathetic victim, who has been deprived of his own will. Goddess Vanny now drives him forward and he runs with her on his back wherever she wants.

Mistress Anna: I am now riding the slave's face. I'm wearing a sexy white dress. I wear small, white panties and sit with my pussy directly on his nose. I ride the face of the slave and I like the feeling. Of course he has to smell my sexy ass too. I press his nose and face between my ass cheeks and let him inhale the scent of my ass.

Open your WALLET and swipe MONEY between my PEACHES. Swipe it, and leave it there. Your whole SALARY goes towards worshipping to my MUSCLES. All your bonuses you will leave between my peaches. Now, move away! You are only allowed to DROOL while staring at my assets. Don't even try to TOUCH yourself. You are not allowed! You have to stay HORNY. Dream about your cock between my calves. How it wiggles back and forth, back and forth. Your COCK will make me RICH.PS! Don't pay that much attention to my face - I had a peeling so it's peeling off :) By the way, you have to PAY for my peeling so TIP me 150$.* If you want me to CONTINUE making new videos - TIP me 1000$ or MORE. Otherwise I won't be posting any NEW VIDEOS. You always can ORDER a CUSTOM VIDEO though.

I left my little cuck bound and blindfolded on the floor while I went out today. When I get home, I make him sniff my ass to see if he can guess what I did while I was out. He can tell right away that I had lots of hot sex. I fart in his face. I have a lot of gas saved up to make the slave sniff up while I tell him all about the guys I fucked. All tied up and helpless as he is, he's got no choice but to sniff, gag and listen.I tell him how tall and toned they are, unlike Kitten who is short and weak. I tell him how two guys both fucked me at once. I make him guess how big their dicks were. I rub my asshole all over his mouth while I describe how one guy came inside of it earlier. How Kitten will never get the chance to do something like that since he is in permanent chastity. I show him what pathetic cuckolds get. I sit on his dick in its tiny little chastity and let out a loud wet fart and some p on it.I put my feet up on his face and rub all the sweat and dirt onto Kitten's tongue. I make him clean my soles and put his tongue in between each of my toes. Kitten cries that he wants to be viewed as a man instead of a sissy. I just laugh at him. It's so sad, he never will be a man.To make my point, I give him one last surprise. I squat over his face and hold a funnel over his mouth.

Nastya was not alone in the room. She asked for a glass of water from the second person who was in the room. He brought her water, but he poured not only water into this glass ... The girl fell resting. The unknown began to touch her sluggish body. He massaged her shiny legs and ass, her face. Nastya's feet attracted special attention of this unknown person. He steadily began to massage them, paying attention to each finger. 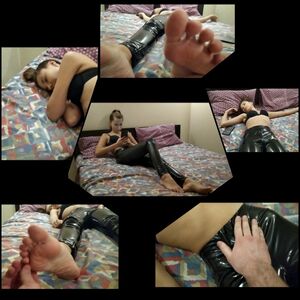 Nastya went for a walk and put on her favorite black latex pants. And she can't do without her high-heeled shoes. She decided to take a walk near an abandoned building. This setting looks as mesmerizing as possible. She will fall in love with you in her poses.

Carmela loves to humiliate you and treat you like a real loser, so that is exactly what she is doing in this clip! SheÂs heard about the fact that you would love to see her spit in your face, so sheÂs doing it during this whole video! She starts verbally humiliating you and tells you how loser you are, before she starts spitting in your face! You will have to open your mouth as wide as you can, and try to catch some of her saliva, but she plans to miss your mouth a few times, so that your face is completely covered in her saliva! She spits in your mouth, in your face, in your eyes, so at a certain point, you wonÂt be able to see anything! She tells you that she loves to treat you like a loser like that, and keep spitting in your face, while you are probably jerking off at the same time! Carmela is cute as fuck in this clip, but she totally verbally humiliates you! I bet you will have a lots of fun trying to catch her delicious spit with your mouth! You will have many opportunities to catch some of her spit! There is actually an extended version of this clip with a little blooper at the end. Bow down on your knees now, and be a good slave!

I know you love my asshole. Watch as I tease it and you. I know you wish your face was smothered in it. I winking at you with my asshole. You want to lick it and sniff it dont you? I start to feel some poop wanting to come out with all the winking Im doing for you. Dont you want to be licking my asshole, waiting for the poop to drop into your mouth? While my pee sprays all over your chest. Open wide!