My feet in the grass. They are slightly dry, dirty and I hold them in front of the camera, which is hiding in the grass. In the background you can hear my dogs romping and also the walkers, but you are ignored by me again.

124450 - Nurse Wetting Her Pants and Filling Her Flats with Pee

Nurse Julia is busy, very busy, but she desperately needs to pee. She plays with her flat shoes - dangles them, pops out her heel! Her bladder is so full! She holds it and holds it, but at some point it`s impossible anymore. She now stands up and lets it go! Here it is - a huge flow of hot warm clear pee! Soaks her violet pants a lot, flows down to her flat showes and fills them with pee! After the pee flooding, she shows us her wet panties too! Fantastic mega wetting! 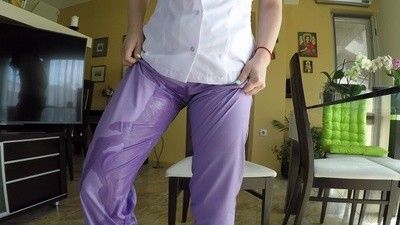 I want you to jerk off for me my jerking pig.You like to jerk off after a jerk off instruction? Then I have something really nice for you.Lean back and jerk off exactly as I want, without ifs and buts. You are a little jerking slave who can only jerk off as I say it and not otherwise.Mistress orders to jerk off. Mega dirty talk dirty. Slave penis bursts with lust.Mistress just jerks on.

FREAK SHOWCLIP IN ENGLISH! FREAK SHOW ? THIS IS THE FULL CLIP of FREAK SHOW 1-6: Welcome to our new humiliation-show ?DEGRADING THE WIMP?! GODDESS GLORIA ? TV HOSTESS and CHIEF MANAGER OF WIMP-HUMILIATION ? gives ALL OF YOU a show of our main attraction in OUR NEW FEMDOM DUNGEON! She introduces you OUR total laughing stock , SUPER FREAK SHITFACE ? THE 40 YEARS OLD VIRGIN LOSER! HAHAHA! The SHOW is a new totally awsome masterpiece of meaness invented by MASTER HUMILIATOR - THE WHITE PRINCE for your amusement. SHITFACE the shy ugly virgin loser who puts up with everything is the absolute perfect public laughing stock for ALL OF US SUPERIOR, SADISTIC PEOPLE! Fort he past months this subhuman piece of sh*t is imprisioned in that very small cage. It only gets released from that place when WE are doing OUR FEMDOM HUMILIATION CLIPS or being tortured for OUR fun! In that very long clip you can laugh at shitface in its cage and also enjoy the pathetic sight of that little loser standing in a pillory. However the biggest humiliation in this clip is probably the PILLOW-HUMPING PART. GODDES GLORIA makes SHITFACE hump a pillow as it has to worship a small pic of MASTER HUMILIATOR ? THE WHITE PRINCE. To increase SHITFACE discrace its own parents have to watch the total humiliation of their wimpy son! The soul-crushing, humiliating way GODDESS GLORIA parades that shy, very sensitive wimp in its cage is absolutely inhuman, cruel and absolutely awesome. SHE also will unfold some very nice sadistic surprises for your enjoyment. MASTER HUMILIATOR has always a mighty hard-on watching the show. WE are sure ALL OF YOU will enjoy that true masterpiece of emotional sadism! WE HAVE ALSO SOME VERY PLEASING NEWS FOR YOU: ALL OF YOU CAN HUMILIATE AND DEGRADE SHITFACE IN REAL LIFE! JUST WRITE AN EMAIL TO FEMDOM-AUSTRIA TO GET ALL INFORMATIONS HOW YOU CAN USE SHITFACE OUR TOTAL LAUGHING-STOCK! AS ALWASY WE ARE VERY GRATEFUL FOR YOUR CREATIVE IDEAS TO INCREASE SHITFACEÂ´S SUFFERING EVEN MORE!

Asian Goddess Rachel's Aroma Training continues but this time with something a bit more spicy! She hasn't showered in a while so she sits backwards on the chair and shoves Jimmy's breathing tube right up to her asshole!First she makes him breath in through her dirty panties, taking DEEP SNIFFS, Before pulling down her panties and shoving it into her sweaty butt! Jimmy chokes on gags on the smell but she doesn't care! She even make him massage and worship her feet while sniffing her ass!Asian Goddess Rachel is cruel and horrible! you don't wanna miss this video!

Today I'll trample the slave without shoes - but I'll make sure it hurts anyway! I'm trampling his abs - and his abs only - under my big bare feet! Again and again my heels sink deep into his stomach and my full weight slowly break his abs. And you get some great close up shots of my feet as I only stand on my tip-toes or on my heels to increase the pressure on his sore abs. After only a few minutes his abs can't hold the tension anymore and I sink in even deeper into his stomach - causing even more pain! This is a non-exclusive custom clip for a fan. If you want me to do a custom clip for you, send me an email to marissa@madamemarissa.com!

Goddess Rachel was out for a 8 HOUR WALK in her SMELLIEST SHOES! Jimmy is pinned beneath her chair!She smacks his face with her dirty soles, telling him to eat the waste before taking off the shoes to SUBMERGE HIM in her foot scent! She rubs her sweaty socks over his nose, cupping them and telling him to SNIFF HARDER! the odor is so strong even she can smell it!She rams her socks into his mouth and repeats the process with her bare soles! Jimmy chokes and gags but Goddess Rachel couldn't care less!The video ends with a short POV Segment of her AMAZING SOLES

Asian Goddess Rachel wakes up without knowing that her roommate HAS SHRUNK! She heads to the fridge and grabs a drink before PLOPPING DOWN ON HER ROOMIE! Her plump Asian ass smothers the poor guy as she relaxes and slowly wakes up!Her plump ass wiggles and jiggles on him as she tries to get comfy! At the end she heads to the bathroom to wash her face with her roomie TRAPPED IN HER THONG! Right over her asshole! With him still inside her cheeks she pulls up her pants and heads out for the day!

Ew, a bug! Rachel gets off the elliptical at the gym and goes after the little bug crawling around on the carpet. However, it's fast! It darts away from her soles, and even goes after them too! She yelps- ew, ew, get away, ew! The bug runs all over the room and under all of the equipment as she tries to crush it. After a few minutes, the bug's in the center of the room waiting for Rachel's next move... and it looks like she's just stretching now, yay! The bug takes a breather, thinks it's safe. It sees this all of the time and admires Rachel's hot athletic body as she stretches. And then... SPLAT! Hahahaha! Rachel fooled the bug by acting like she was stretching when really, she was just slyly getting in position to turn the little fucker into a pulp!

As a footbitch you should accept your lower place in life that is always located next to my divine feet. My sweaty and dirty soles are are everything you crave for. You would spend everthing you have just for beeing allowed to kiss them, smell them and lick them... You are just a pathetic footbitch for life! Accept your fate.

Serenity just finished a photoshoot under this beautiful sunset of Bangkok, so she is now ready to relax, and just rest her sweaty tired feet in front of your face! She is now planning to go swim in the pool, but she wants to use you as a slave just before jumping in that pool! ItÂs been a very long day with her lovely feet inside her high heel shoes, so she wants you to get down on your knees, and be ready to serve! She slowly takes her high heel shoes off, just to tease you with her sweaty naked feet, and she wants you to sniff them hard! She takes pleasure to cover your face with her sweaty naked feet, and she wants you to take some deep breaths in her feet! Serenity also wants you to stick your tongue out, and lick that sweaty bottom of her soles! She just wishes that you could serve as a good slave! She also wants you to open your mouth as wide and you can, and suck on her toes like a good devoted loser slave! Be ready to serve!

I know about your big ass fetish, white fullback jeans fetish, sniff dirty panties, so I decide to take your fetish to another level.Before I went from work, I took an enema, and i was hard to get home, bud I made it.Now I stand in front of you, and tease you with her big ass, and white jeans.Probably you are not ready to this enema shit and pee explosion out of my ass and pussy.At the end I take off my panties, and let you stroke your tiny cock with those dirt.Take a look at my super filthy ass.

Teddy bear have to suffer under my big butt. I sit on his face and naughty directly to his nose. I'm pooping hug messy shit on hungry bear and smothering it in stinky shit!

Incredibly charming and at the same time very domineering, Mrs. Veronica is conveniently located on the couch. Her beautiful black high-heeled sandals require cleaning. Veronica calls up her slave. And here the most pleasant process begins. With his tongue, the lower one carefully passes along the sole of sandals, licking all the dirt. From all angles, one can observe her efforts and the Lady who is watching the work of the slave. Then the bottom proceeds to clean the heels, also licking them. Well, look at the result yourself;)