I put my socked feet up and allow myself a little break to breathe. I don't want to know anything about you right now. So you have to act inconspicuous. Just fix my socked feet, the slightly dirty, white sneaker socks and be grateful for the point of view.

In this intense, long episode, the slave is submitted and blindfolded like a mummy!New exclusive clip, twenty-eight minutes length!Avi Format. 698MB.

Tied up under me he will now suck my feet.The slave is tied up and with his mouth taped shut and I will now take off my socks. I will now treat him with my bare feet. He has to breathe through his nose and smell my feet first. I rub my bare, sweaty face across his face and he has to smell, smell, smell ... the damp soles and toes. Then I remove the tape over his mouth and he can lick my bare feet with relish. My toes want to be sucked intensely. And my soles are pressing hard on his face. I love and I need the feeling under my feet. In addition to face sitting, licking feet is my absolute passion. 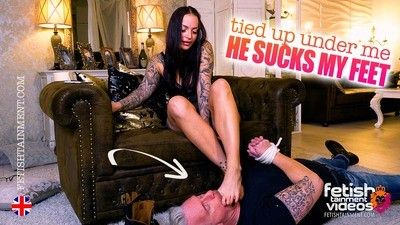 This is the sequel of our first "Cock Harassment" movie! The gorgeous Angela turns it into a real spectacle as she is beyond any control or limits. Once again she shows us she is still the undisputed Queen of cruelty and brutality when it comes to crush, and cock destruction!

As soon as Mistress Zora sits with her ass on his face, the slave starts to whine beneath her and almost starts to cry. What a fucking wimp! Mistress Zora doesn't why he is whining so much because so many would be jealous of his position and would be too happy to swap places with him! She tries to silence his protestations by sitting on him and talking him down. What bad luck he has!

The beautiful Lydia and Shona are together the very first time in our 9th great cock crush and foot job video. The class and sex appeal of Lydia combined with the youth and freshness of Shona make the perfect cocktail for a fantastic video !

I'm starting to shit. my holes are visible in close-up. You can clearly see the shit coming out of my ass. I'm lying right on the floor. It turned out to be an excellent bunch. Shit trample underfoot. really stinks. my body is in shit. 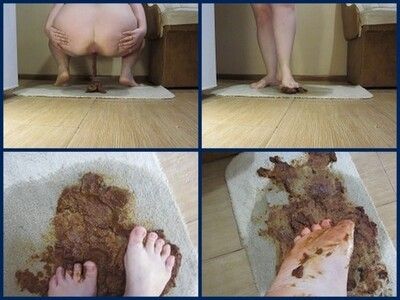 My slave has been affixed to the floor and placed in a dog mask. Now the mutt is mercilessly fucked deep, hard and fast! He's fucked so hard that he whines but it doesn't bother me. I just fuck the loser harder until he shuts up!

It's your first day as a secretary, and your boss calls you into her office. You can see her black thigh highs end before her short skirt, and her big tits are bursting out of her shirt. She is furious at your outfit and appearance- you are to wear heels over 6 inches, a short, tight skirt, sluttier shirts, and more lip gloss. She instructs you to wear her shiny patent pink heels, and makes you rub her feet as you take them off. You're so good at foot rubs, and the whole office is full of sore feet from the strict high heel dress code! My barbie bimbo secretary will be busy rubbing feet all day... This video was a custom commission! Get yours today

I rushed to the bathroom after eating my fill for the last two days and oh the ******! The toilet is clogged. Standing there in indecision, I feel the turd coming. I barely have time to take my pants off as it just plop from my huge ass and roll down.

CUSTOM REQUEST - PART TWO: BALLBUSTING SCENESBoth only with sexy panties and spreaders to cover the nipples. She with a mask, Lady Scarlet with her face uncovered, the slave Enea completely naked.You are all 3 on the bed (with black blanket), the slave is with his head towards the wall, she is perpendicular to the slave on the right and Lady Scarlet between her legs.Perform an alternating footjob, first her, then Lady Scarlet, alternate several times, finally together until you bring him to squirt. You will then proceed with a short post orgasmic torment.During the footjob you will tell the slave that he is very lucky to be able to receive a footjob from two Goddesses like you, but that a nice surprise awaits him, during the post orgasmic torment you will reveal the surprise, that is, you will fill him with kicks in the balls.At this point you will order the slave to stand up and put his arms behind his back, she will take the timer and set it to 10 minutes telling Lady Scarlet: We have 10 minutes to cancel this slave with our kicks in the balls and you will laugh. It starts you as a guest.Lady Scarlet will start kicking him in the balls, then it will be Mistress Gaia's turn, and then you will kick him in the balls together, sometimes alternating, sometimes giving him a conspicuous series of kicks.I'd like to see you both give the following types of kicks:- alternate left and right- sensual kicks- double kicks- kicks from behind- a lot of knees in the ballsDuring the kicks you laugh and joke and make fun of the slave for the noise of the balls and urge him to resist.Once the timer has sounded, Lady Scarlet will propose a final game: Now we give him a kick in the balls for one, but of the overwhelmed ones, let's see which of the two gives him the lethal one.And so you alternate with 1 very powerful front kick to the head, not repetition, but making the slave position and aiming well, until the slave goes to the ground. Finally she will ask the slave to kiss your feet to thank you and close the video with a nice victory posed both with one foot arched over the slave.

Stupid foot cucky lays there helpless as I use his face as aÂ pedestalÂ while I get dolled up--I wanna fuck my stud again!! BAD! I verbally mock pathetic foot cucky's lowly status while rubbing my stinky nylon feet all over his face...he's such a loser, I can feel him trying to hump the bottom of my chair lmao!!! Too bad you're in chastity, loser!I further humiliate him by using his tongue to polish my HOT Louboutin heels (telling him my stud doesn't like dirt on the bottom of my shoes) and leave my REEKING gym socks on his face when I leave, so he has to smell my foot scent while I'm out getting fucked!!I LOVE making foot cucky worship myÂ nylon-clad legs and sweaty feet, especially knowing they'll be spread later for my stud! haha!**My pantyhose were soaking wet after filming this. Perfect foreplay; it made my fucking right after this SO much better!!

I have two slaves in the cage to play with today... I make them out and place them on their knees facing each other for a challenge to the last slap! I put myself in the center, between them and with both my hands I start hitting them harder and harder: I want to see who will resist more. I increase the strength and speed of the blows, but they are really resistant and nobody gives in even though their faces are now purple! It almost seems like the challenge is between their cheeks and my hands instead of it being between the two of them... it's time to raise the level and move on to something heavier like some nice whiplashes on their backsÂ

ITALIAN SPEAKINGThere?s nothing like a good ass fucking to get ones endorphins going. Today I?ll enjoy ass ripping this bitch. I also have a large slippery throat gag that I?ll test on him as I get him to swallow it. I have him fastened to the suspension bar with his arms behind his back. That?s extremely painful, and I?m enjoying his squeals as I fuck his sorry ass good and proper without mercy. It?s a great feeling to Meet On The Bone?

I was at a party last night and went straight to the office - and the new office technician comes into my office before I could change my clothes. My chair is wobbling for quite a while already and the door opening pedal really doesn't work reliably - I hope he'll get both of these problems fixed before the boss arrives - so I can change into more office suitable clothes before he sees me in this outfit! While the technician crawls under my desk and checks the chair and the pedal, I stay at my desk and dangle my feet in front of his nose - although I'm sure they don't smell good after a party night! I even take off my shoes and touch his face with my sweaty feet, but he doesn't seem to care :-D When he works on the pedal, I also step on his hand a couple of times and when I walk out of the office to grab a coffee, he secretly smells my shoes! The new office technician seems to have quite the foot fetish ... and I'm sure I'll be able to take advantage of that in the future!

Princess Cindy is ripping you off bill by bill! She is here to have fun with you. Of course it's all about your money, so watch out! She rips you off mercilessly and you don't even notice it, because she can distract you so well with her seductive way and her sexy nylon ass... and she does it until you have no money left and thus have become worthless to her!

You can't resist me in sheer pantyhose.Every time you buy a video,you fall deeper into submission.It feels so good getting down on your knees and worshipping every inch of nylon.On your knees is where you belong..

You're obsessed with serving and stroking your dick and of course,my goddess tasty sneakers,socks and soles.