Unlike losers people have a schedule full of socializing, dinners, partys and dates for the weekend.You on the other end dont have any appointment at all. Nobody that wants to meet with you and is interested in you. Why should they? You are gross and boring af. So you will spend it like always in your room.Sitting in front of your computer screen and jerking off non stop like the fucking freak you are. Keep stocking up on my clips as they are all you have loser. I am so kind and give your weekend some kind of purpose and now i even constructed a joi schedulefor you. Starting every Friday and ending at Sunday evening. Of course you will have to pay your cum tribute when i am done with you but lets see if you can evenmake it that far. haha Its all about stroking, stroking and some more stroking. Sounds good to loser like you. I know. You can thank me later.

Miss Serena " I want you to worship my smelly summer shoes and my bare feet at my home. Get on your knees in front of my couch and and lick the soles of my shoes. After that you will sniff inside my sweaty shoes and finally I want to watch you worshiping my bare, smelly feet !

My young novice Peter is visiting again! Apparently he does not get enough of me as mistress! Who is surprised?But the last time he came out as a beginner in the field of pain therapy and showed up to now little stretchy for my thick rubber tails, I have discovered with my unique flair, a new talent at Peter! And as sweet as I am, I encourage Peterchen's education, since I am a true expert in the field! Peter's talent is to be the perfect ladies' room! Without grumbling or growling, my new loo receives my spit, my cigarette and my divine brown gold! Slowly I let my caviar slide into the open mouth of Peter! I even film myself, up close. Brav and smacking Peter eats his mistresses sausage! Since he is doing so nice, I finally feed him and personally give Peter his relief!

103805 - Jumping and stomping all over his hands (small version)

I make the slave thank me for using such easy shoes for the hand trampling in the beginning - that's before I reveal to him, that I'm not only going to step on his hands, but rather plan to jump all over them! I step on the couch and jump down on his hands with my full weight - crushing his fingers and hands into the floor! Again and again I jump down on them, then I get away from him a few feet and jump on his hands from the distance! Oh, I'm going to teach him how much these sneakers can hurt him! After all this jumping, stomping and grinding his hands are glowing red under my shoe soles!

Christin crushes a good Radio. The Radio plays music and Christin dance and step on the poor Radio. She crush it very hard under her flat Shoes, until at the end they only small pieces.

My little slave worm had to be punished as he annoyed me quite a few times. Lately he had destroyed my Paypal account with inappropriate comments. For punishment I thought of something really nice - at about 13 degrees outside temperature and 10 degrees in the water he had to move his ugly ass in my pool. A few times I have submerged him. I hope this shivered useless slave has learned his lesson!

You are little loser !You are ordered to kneel before me and immediately lick clean my soles with your tongue! Do you understand?! You will not escape until my are licked compltely clean! You have a lot of work to do little loser,before I crush your flithy tiny loser's body!

So I just got done kicking the loser's ass (see previous clip) and thought to myself it's time to switch it up a bit and work on his face!I start out by slapping him and spitting in his ugly face but the loser probably likes it so I pick up the pace. Left, right, left, right... His cheeks will be so sore by the time I get done with him!Grabbing him by the chain around his neck I reposition him as I please, scratch his chest with my perfectly manicured fingernails and watch him squirm just to slap him some more. After making him get on his hands and knees I start pushing him over with my heels, aww, poor fattie can't keep his balance!Some more spit, a few well placed kicks and a lot more slapping follow. This felt so satisfying!

Mistress Haruki walked daintily into the toilet and figured out which seat she would take first. She went to the chair and bore down on the cleaning slave. She made herself comfortable, making sure that her ass cheeks covered the slaveÂs nose and mouth. The cleaning slave reached out with its mouth and nose, burying its tongue and mouth deeply into the mistressÂ crevices. The mistress gasped at the slaveÂs hunger and smiled. He had been trained well. And now for the piece de resistance. She had held her shit in for a day now, and now was the time to reward the shit slave. Squatting atop the squared hole, she released a warm and foul fart, making sure the slave inhaled all of it. The fart was wet and smelled faintly of citrus and fouled fish. The slave opened its mouth wide to catch the putrid shit sliding out slickly from the mistressÂ anus. The anus blossomed twice its size and quickly unloaded six inches of stick shit into its mouth. The turd was almost shapeless, but was extremely sticky. Light brown, it was definitely bordering on diarrhea shit. The shit slave chewed as fast as it could, making sure that not a morsel was wasted. The shit was a bit chewy and challenging to swallow because it was so sticky, but it succeed in not wasting even a small piece. The mistress walked to the cleaning slave and sat her shitty anus on his nose. The first slave began cleaning her out, swathing her STINKY hole with his tongue. The mistress is satisfiedÂ for now.

Today you get little slaves sow your second job from me. For this task you need a tape or adhesive tape, a candle, a spoon and a needle. Your task you will do exactly as I describe it in this video. Your task will only be fulfilled if you do it exactly as I explain it to you at the end of the video. And woe betide you don't do your job right, cause you're really gonna be terrible. 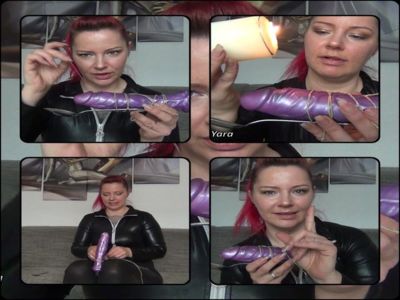 Sophia enters the room completely naked. She's excited to be going out tonight and shows you what she's thinking of wearing. She also tells you what she's not wearing -- who will know besides you and she? She then slips into her brown pantyhose being careful to get the centre seam lined up correctly and asks for your help since she can't see in back. Next she pulls on her dress and shoes and straightens her hair, asking if everything looks alright. Sophia poses in her outfit and then does one last twirl for your enjoyment before she's ready to go.

Look at these sexy over-knee boots - they need a proper cleaning - and you'll clean them - with your tongue of course! Start by licking the dirty soles - who knows what kind of grime got stuck on these leather soles :-D And then you'll open your mouth and suck the heel clean - close your lips around the heel, get your tongue on it and then slide it slowly in and out until it's completely clean. Then it's time to clean the rest of the boot. Starting at the tip you'll follow my finger up the boot leg until you arrive at the very top. And then back down again to lick the leather next to it ... and you'll continue like this until you've licked the leather from all sides! And then it's time to take care of the other boot! And you better put some effort into it - maybe I'll lend you, my boot whore, to my girlfriends then as well :-D

THIS IS AN EXTREME PISSING VIDEO! Before this scene, I had scratched my slaves back savagely with the heel of my shoes. He was cut, and I wanted to do something that would sting him and cause him even more pain. So yeh, I pissed all over his scratched back! A MASSIVE PISS! Then I forced him to lick all the piss up from the floor using a piece if tissue paper. The slave mopped all of my piss up, and squeezed every drop into his filthy mouth! AWESOME PISSING CLIP!

An incredible premium video) The real transformation into a sexy chocolate mouse, the heavy smearing of fresh tasty and fragrant shit in the face, sucking and licking a huge heap of chocolate from my ass, maybe you already want to kiss me?)

I'm going out to lunch soon. Yay! But first, I need to pee, so follow me to the toilet and you can watch and hear. When I'm done, you can help me pick out the shoes to complete my outfit. I have so many, so even though I have a pair in mind, it may take a minute to decide.

Mistress Lilly continue her shits and diarrheas stories. The silicone lady love to shit and piss EVERYWHERE ! This time she was doing more diarrheas and turds in her panties. She love to record all of them on camera for her devoted toilets ! part 2 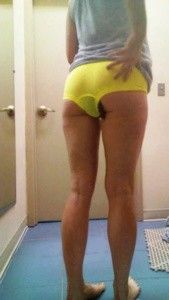 My new boots look very cool on me. You may admire them and imagine how you clean them with your tongue. Imagine you can spray on my boots and then lick clean. A great idea; was not you a looser?Kiss my boots slave from top to heel. 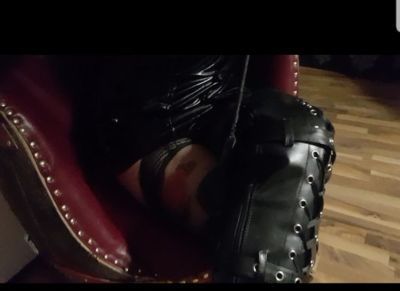