I test my new floor covering slave thoroughly. After all a good floor covering has to be able to take some jumping, kicking and bouncing. I enjoy the pathetic whining of the slave while I jump on him with my full weight, run over his limbs and stand on his head. Will he pass the endurance test?

MASO COCK PLAY WITH FIRE! / It is a big deal to ask Reell this question - usually a man does not dare to do so. And now you are lying there. You are so close to your wish. Feel how her fingers gently caress your cock until you can't stand it anymore... - feat. Cruel Reell (GERMAN CLIP)

Today in my toilet very stinky shits. After yesterday's party and a****** - bright heap of shit.You will see my ass and dirty asshole up close. Smell my dirty toilet paper. I will show you my nice shit that comes out of my ass.

Enough wanking - now it is time to pay! Goddess Vanny expects a high amount of money from you, after all, you've jerked a lot in the last 6 months and today the total amount for this time falls due. To be clear, you will pay a lot to your mistress. Goddess Vanny has not overlooked a single moment and is collecting her money today!

Your dirty fuckmouth is now used by two dominant ladies. We know it needs it! Open wide for us and our hard cocks and let us fuck you good. Lady Naomi Rouge and I will fill your mouth with our big cocks. Deep into your mouth they go, in and out, in and out... Just what you need, you little cunt. We use you as we like it and you have to obey and let us give your mouth a good fucking!

ITALIAN SPEAKINGCUSTOM REQUEST - I love submission done for fun and with a smile on your face. I would like to see you in a home environment dressed in shorts and slippers. Your boyfriend is lying at home lazing around on the carpet shirtless. You go around the house, and every now and then you approach him and taking off a slipper put your foot on his chest. You torment and humiliate him by telling him You are under my feet only to be my dominated house pet. So stay down bitch ...

I wear a raincoat and rubber boots. my stomach hurts. I'm starting to shit on a raincoat. my holes are seen in close up. You can clearly see how the shit comes out of my ass. It turned out a great bunch. I stomp on the shit with my rubber boots. really stinks. 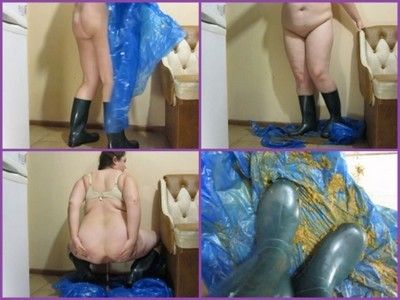 Today the slave had a lot to film. First he was used by Mistress Sarah on a trip to the mountains and then he was sent to Mistress Anita to be totally humiliated and mocked. In the first part, he was beaten next to a tree in the wild forest and then obliged to worship her Mistress's boots in the middle of a forest. At one point, coming to pee, Mistress ordered the slave to lie down and keep his mouth open while she filled him with her hot pee. He was obliged to drink everything. After the trip to the mountains, the toilet slave was sent to Mistress Anita to receive a large portion of kaviar, being mummified beforehand. Mistress Anita left only his cock free and made a huge diarrhea in his mouth. Towards the end Mistress stained his penis with diarrhea and began to masturbate him. EPIC TOILET HUMILIATION CLIP.

15474 - Your precious inflatables under my boots and high heels

Are you scared to see your inflatables around me? Are you scared what my boots or my cigarette could do to them?! Let's find out if I can walk on them with my Buffalo boots without destroying them :-D Oh, too bad, the first ones are already crushed ... do you think you could patch the big holes my chunky boot heels leave in your inflatables? I think I'll also burn a few holes into them with my cigarette and my lighter! But to crush your other inflatables, I'll quickly put on another pair of shoes ... with thin heels it much easier to destroy them! One after another is crushed under my cruel feet - I don't care about the air mattresses, the chair, the bananas or even the big unicorn ... they're all getting crushed and I make sure to rip them open wide with the heels - to make sure they're ready for the trash and can't be repaired!

129179 - Shitting And Farting In Black Leggings

I am a naughty chubby girl and i want you to smell while i'm farting in my black leggings and i shit right into them listen while i fart and fill them before show you how amazing it feels. I peel them off and show you the messy creamy load insideÂ. &#128521;

Princess Serena: Do you like sweaty socks? Do you like the wonderful smell of my socks? I'll let you pass 2 pairs of my stinkiest socks and you have to tell me which pair you like better and why. I let you lick and kiss 4 smelly socks. You will suck the sweat from my socks and eat the sock lint. Are you already very greedy for my socks?

Lexi took her two friends and her slave dog for a walk to show them how this slave work and how obedient he is. They have him on a leash and he's walking on all fours like a real dog while the girls enjoy having him at their feet.They stop at this deserted place to give him a little training in foot and boot worship and trample the footboy on hard rocks and under their high and thin heels. The girls are dressed in sexy dresses and cars going by are honking and their crews are looking with enthusiasm. Perhaps they would want to be in his place. At the feet of these young and sexy girls, groveling for their attention. Too bad - the girls already have a a toy to play with and this show has just started!

For three weeks I kept him chaste and made him hot again and again.I free the good one from his tail cage and with a few tools and my graceful hands I bring him to his limits.He experiences a ****** orgasm, which I ruined mean piece beautifully. Three days later he still had a sting in his tail. Ruin succeeded!

154065 - Pulling the loser into my ass during facesitting (small version)

I've bound the slave to the workout bench with multiple ropes - so he's completely unable to move - and then sit down on his face and smother him under my hot ass! The loser is moaning and whining the longer I'm smothering him and flatten his nose under my butt. But I brought another rope that I didn't use yet ... to pull the loser's face even tighter into my ass! I wrap it around his neck and then pull his head up - while my full weight presses down on his face. Now he panics even more, feeling that it's not even possible to move his head and he's totally at my mercy now! Let's see how far I can push this loser today!