CUSTOM REQUEST - The video shoot point is placed under an open chair so that your ass is visible when you sit down. You walk in wearing the nice skirt and you walk to me laughing and insulting me, saying you're here to use your toilet again and that you can not wait to have a good crap.You sit in the chair above me, so that Your majestic ass domains on me from above, and order me to stand there and wait for your shit mature.In the meantime, grab a phone and call a friend, and start talking to her about me, mock me and humble me and take fun of me with her on the phone, you explain her that I'm your toilet and how you use me... then at some point you ask her if she wants to use me too, you take a picture with the smartphone and you send it to her and she laughingly says of wanting to use me willingly. All this while I am from the bottom powerless and helpless, in front of me there is your ass and I'm waiting look majestic your ass widens to drop the shit in my mouth.At the end you say goodbye to your friend, you shit in my mouth and you go laughing ...Your devotee human toilet 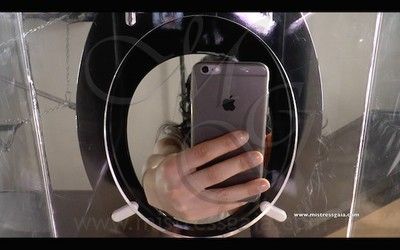 7116 - Spanking the boot slave for acting up

I order the slave to clean my leather riding boots with his tongue - but this loser dares to act up and tell me that he doesn't want to lick them anymore. I guess I'll have to discipline him! I put him over me knee and start spanking his ass! I put a wristlock on him to keep him in place and mercilessly hit his ass again and again - not only with my hands, but with the riding crop as well. I'm laughing my ass off while this loser screams in pain - this is way more fun than I thought! After a while he begs me to be allowed to lick my boots again - but his punishment isn't over yet - I want to make sure he's not only licking my boots this time, but also refrains from acting up in the future!

Three girls wearing shoes trample, jump on, and gently kick the guy who is lying on the floor in the face. They also stand on his head. Two of them are wearing sneakers and the other is wearing a pair of winter shoes. The girls switch places so they can all get a chance to abuse him. Time: 18.05 min.

The old human toilet already has white hair on his head, but he has yet to fully satisfy his mistress, who had been training him for weeks. Today he has been bound under a gleaming new toilet seat, and the mistress demands nothing more than perfection. To be absolutely still as the stream of piss and shit come down on your open and willing mouth Â this is the goal and the desirable result. DazuÂs mouth hurts a little from the clear mouth expander that pushes his lips apart, revealing his yellowing teeth. The pathetic slave closes his eyes in anticipation of the salty bitter shower. The mistress blossoms her anus and begins dropping a thick puddle of sausages on the slaveÂs teeth. He opens his mouth to receive the gift, and feels that this time, he has done well. The mistress grabs a pair of tongs and mashes the putrid brown shit, that squelches noisily inside the slaveÂs mouth as he tries to chew on it. This turd is a bit sticky and dry, and itÂs now going down his gullet, because it pleases the mistress. The mistress smiles and feigns disgust, plastering the slaveÂs mouth so that not one morsel of shit can get out.

The time has come - you need to give your boring live a little bit of diversion, loser. My socks caught your eye immediately while you were looking for this. Give in to the temptation of my beauty! Your tiny dick wants it... *smile* I will fuck your underachiever brain now. And at the end there will be a special dessert for you...

Ariel has been wondering what was behind the only door in the house she is not allowed through since becoming the Master's secretary. She's more than a bit surprised at what she finds in there and lingers too long. What's a Master to do when his snooping secretary find his secret pony girl stable??? Saddle up Ariel!! 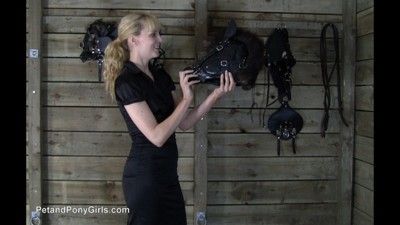 I start this session by making the slave lick the soles of my flats while I sit on his stomach - then stand up and start trampling him! I walk all over his chest and stomach before I start really torturing him by standing on his throat with my full weight. I know his ribs are really bruised from the previous session and he has trouble breathing when I'm standing on his chest as well - but he better doesn't expect any mercy from me. In between I order him to kiss and lick my flats - this time while I'm standing on him of course. And in the end, I even take off my shoes and order him to lick my bare feet!

Jack has been bothering Rebeka and her friend quite some time now and today he was even worse than usual. He tried to touch Rebeka and was really pushing it and she just had enough. Rebeka fights back and grabs Jack's hands and pushes her high heel shoe on his neck, choking him and forcing him to give up and beg for forgiveness. Jack is helpless and Rebeka punishes him by choking him between her legs and under her feet and shoes and by forcing him to smell and kiss her feet and shoes. Jack's is totally overpowered by her and does not even has any strength left to fight back. She just owns him and do whatever she wants! And she wants to humiliate this pervert and make him beg for mercy!

Oh, you woke up a little dizzy? And you're so tiny now?! Just the perfect size for you tiny perv to explore my giant flip flops lying in front of you, right? When I wake up as well, you're hiding under the coffee table - well aware that a giantess like my could crush you flat without even feeling it :-D I walk around and look for you - I know you couldn't get far away - being so tiny - the apartment must be as big as a city to you! But I know how to lure you out ... I know you can't resist my pretty feet - even though they're so dangerous for you ... and once you get out to get a close up view of them and my flip flops - I just grab you and lift you on my flip flop. You wonder how you got so little? Remember the little drink we had?! Well, yours had a little extra - a magic potion to shrink you - and unfortunately for you, there's no potion to get you back to normal size! But it was your wish to be my little foot slave, wasn't it?! You should've been careful what you wish for, now you'll have live as my ant-sized foot slave forever - at least if I don't crush you by accident :-D This is a non-exclusive custom clip for a fan. If you want me to do a custom clip for you, send me an email to marissa@madamemarissa.com!

ITALIAN SPOKENThe training of my personal slave as a full toilet goes on. He has made significant progress but there is still room for improvements. Now he is again lying under my chair, waiting for my precious gifts. Today I am a bit constipated, my shit is very hard and I have difficult defecating. First I have to pee; I put a funnel in his mouth and I let it go. My god, how much it is!!! He tries desperately to drink everything but he cannot keep up with the flow. The funnel fills up and a few drop spills before my bladder is finally empty. Now he needs to finish drinking it all. I try again to defecate but Â. No success. I need help! A small enema will do the job. Finally I can expel my shit: brown water and shit fills the glass bowl. What a good cocktail for my slave: do down and start slurping the smelly mess!!

The slave is handcuffed on the floor, Senora el Combatiente now begins to tramp in high heels on the slave around and thereby the cock and eggs of the slave are not spared, the slave moans in pain. Then, for a while, Senora pulls her high heels off barefoot on the slave's body and his head.

Miss Kimbaley tramples a human floor at the backyard. She loves to jump on him, to let him feel her weight and to walk on his face with her dirty bare soles. She loves to stand full weight on his face.

The slave may be tired but that's no excuse for him to lie doen and get comfy on the couch. Such misconduct will be punished! Mistress Jane covers his mouth and nose firmly with her hands. She wants to see how long he can hold his breath for. He was so happy and now he can't even breathe! Goddess Hanna puts an arm around his neck and begins to squeeze. He's not having much fun! The two strict girlfriends keep restricting his air. Let's see how long it is before he runs out of breath...

After a long day my feet are sore, my slave knows, the evening crawls at my feet. First clean my shoes for good and suck my heels, must clean them perfectly every millimeter if you do not want to be punished. Then he will take care of the feet with a long massage. Massaging and licking, removing the sweat from each finger. Then to have a little fun I put his foot in his mouth up to his throat, but it does not satisfy me, so I punish him. Since it is not good for nothing, it will do the footrest! This deserves the incapable like him to become human furniture.

With their boots, the ladies now put themselves on the hands of the slave, trample and crush them. Then Mistess Michelle and Lady Vivian spit on his hand, which he may lick afterwards.https://www.yezzclips.com/store599

Miss Kimbaley tramples a human floor at the backyard. She loves to jump on him, to let him feel her weight and to walk on his face with her dirty bare soles. She loves to stand full weight on his face.

Look at what I'm holding... These are two expensive cars in toy form and their fate lies, as you can see, in my hands! I will stomp on them and crush them into a thousand small pieces! Their complete scrapping is imminent and you have a front row seat! You can hardly wait to see how I destroy them, crushing them hard under my boots... Come on! Look at me destroying these little cars because yours will be next!