Here is our newest Sneaker-Girl Zoey - in action again! To make all barefoot and sock fans happy, she has decided to perform a walkover session with (over) a big white toy-car. Soon she starts her barefoot part. Nice crackling sounds can be heard. Her feet are wonderful. Watch her legs - arenÂt they perfectly shaped, well trained and strong? After a while wonderful Zoey slips into her black PUMA socks. You can see them as foot-protectors. But for the car - they are quite the opposite. Now Zoey can apply more pressure, mangle much stronger over it! SWEEEET!

I wanted to go out and my slave had the honorable task to clean my spiked heels! Not with his sloppy slave tongue, but carefully with cotton swabs! He did a good job and as my heels were clean again and he was allowed to wait for me until I come back. 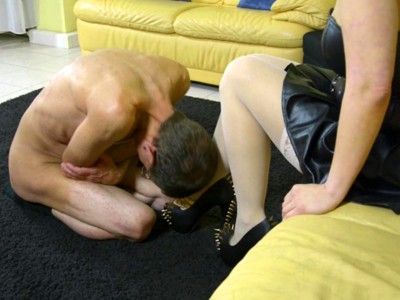 105431 - Girlfriend makes you lick her asshole and eat her shit

We just came back from a party at our friendÂs place. I could feel your eyes on me all night long. You like that sexy red dress donÂt you? I felt so sexy and horny tonight! You know what I was thinking about? You recently started licking my asshole before sex. I love it so much! I had this urge to poop all night long but I didnÂt go. Do you think you couldÂ IÂm embarassed to say this butÂ Do you think you could lick my asshole as I poop? That would feel so good! I want you to open your mouth wide and swallow everything. You could continue licking my ass to make it clean. And thenÂ you could tongue fuck my asshole! Would you like that? I love that you are so open minded and you like to try dirty things for me! I will tease you and make you worship my ass before I squat over your face. Oh yeah, lick my asshole as I push! That feels so good!! You like the taste of my shit? I was sure you would enjoy this! From now on you will be my toilet. I want to sit on your warm face as you lick my asshole and I will empty my bowels in your wide opened mouth! *** Extra scene: Close-up of my poop. That was a pretty long, large and impressive log with 2 different textures in it: hard/knobbly and soft.* Find more scat videos on DirtyMaryan.com *

This slave loves to come visit me regulary. He is a little sh** eater but this time i wanna do different things with him. I love to punish his nipples and his balls, put weights on his nipple and balls piercing, spitting in his mouth...i even force him to sniff ma sweaty armpits, make him lick them, make him eat my nose snut and much more. This guy is so nasty and he is so extremely turned on by this. After a few kicks in his useless balls i let him jerk off right to my feet. He is making a big mess with a huge load of cum...

Dilators, dilator or hegar pins for the male urethra. Do you like urethral games? Do you love to get it widened? Or the feeling when something is introduced? Dilators, Dilator or Hegarstifte are something fine and beautiful, that feeling like the cold pin pushes into your urethra you will never forget.

Here is the next outdoor clip with Sneaker-Girl Red-Queen. She is wearing her white Adidas Superstar shoes and a plastic army helicopter toy-model lies in front of her on red paver-stones. Red-Queen bows down and switches the model on. Its rotor starts to rotate, some lights start to blink and the device sends out annoying sounds. She plays a little bit with this toy, just using her shoes - stopping the rotor and starting it again. Then - play-time is over. First she applies more and more pressure until the rotor is crushed. But soon also the chassis gives way under the sole. The rotation stops - the sound as well. Perfect! A full-weight step-on lets the model nearly explode. From now on Red-Queen steps and treads the toy down slowly - into a pile of plastic scrap. Look into how many pieces she can disassemble it! It ends as a helicopter puzzle - with some hundred parts.

Last days of the summer are amazing! Sunny and warm! Watch me at a beautiful beach full of people, coming out of the sea, drinking an ice coffee, squatting on the sand and peeing in my bikini, watering the dunes with dozens of people all around! Taking a shower after that and showing some tits:) Then I am going into the changing room and my cam man is following me in. He is so horny after watching and filming me pissing in my panties - he wants me to stroke his semihard cock and I did:) After that on our way to the parking he wants to pee and I am holding his cock while he is peeing! Mmmm...so dirty and naughty! 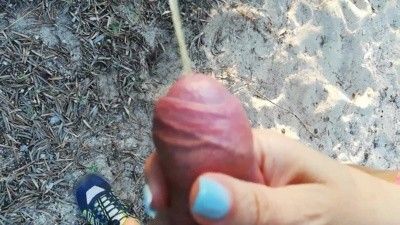 My toilet is broken in and I need to take a dump again. But I have my slave lay down on the floor, and I shit in his toilet mouth! I have more for him, and I position me above him to take a really huge dump. Now heÂs got more than a mouthful. I call my other slave over to clean my ass with his tongue, which should be a privilege.So from now on, his only position should be under my ass and my shit!

YES - we have a new girl on the block. The new girl is > Sneaker-Girl Zoey. The block will be > a set of soft sausages. And in deed - sweet Zoey will perform her debut completely in > BAREFOOT! Nice! By the way - her shoe size is EU 39. So, stay tuned and watch! Zoey starts with a little bit of barefoot posing - on and around the glass with the sausages. Then she lifts the glass up, opens it and places the first fragile banger on the floor. She rolls it under the balls of her feet while she lays down the second one. Sausage 3 up to 5 also fall to the ground, one by one, while number one already gets pressed into halves under ball and toes. Yummy! Zoey rolls the other four bangers under her sole, until suddenly, she steps down on all. Enjoy this wet SQUICK sound and watch the results - most of them had burst. From now on she crushes all five sausages one by one, very slowly, always aiming with her toes, ball, arch or heel. Later on she just mangles them into a paste of sausage-meat, using both soles. But - one banger had been left. Watch sweet Zoey crush it professionally in a solo-execution. Finally she walks and twists over the remains, until only a large spot of pasty remains. Who would like to taste?

You are a lover of crushing? Here in my video especially a clock is crunched. You hear the crack under my heel ... Wonderful! I also like to crunch other things like balloons or food in connection with trampling. If you share this fetish with me, then just have a look at my Crushing Video! 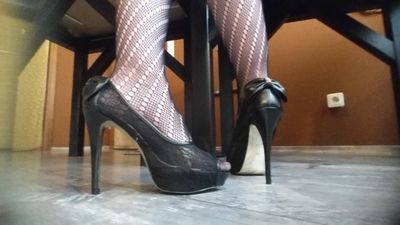 Puppy girl Faye is locked in her cage and she is bored... bored... BORED! She wants to go outside to play. But she is in the cage for a reason. She is a very bad puppy. She has shredded newspapers, emptied half the house into the garden - and buried some of that! But she wants to go for a walk and is prepared to take desperate measures - like squeaking this toy until she drives her owner crazy, oh... or until he takes it away from her. Pfft... she may as well settle down for a puppy girl nap. 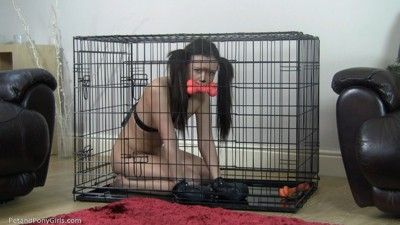 I love shit, I love shitting, I love its warm, soft texture. I like to smear shit all over my body. At times like this, I want my shit-eater to be here and lick my ass, lick my dirty Tits, eat every last piece of shit. And I enjoyed his dirty mouth and tongue, my toilet. 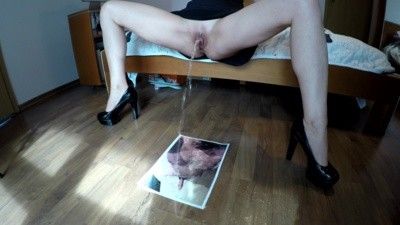 Today Sneaker-Girl Vika is wearing her black, leather ankle boots. These shoes have relatively high heels, slight plateaus under their fore-soles and extremely rough sole-profiles. Watch talented Vika using these hard weapons to crush a plastic box for you. Enjoy her starting with walkover, then stronger treading, finally pure stomping - until the box ends as a pile of flat, broken plastic pieces spread out on the ground. In deed - this girl knows exactly how to use her boots. We really hope, that newer ever a poor finger will stray under these destructive soles. Horrendous pain then would even be - pure luck. But we are sure that permanent damage will be the result.

130106 - N20 Part 2_Bertie With nothing to do but take it, he receives her saliva on his forehead, in his eyes and in his mouth